Tucked away at PAX East in a five by eight yard space, the Supergiant Games booth stood with smiling faces. There were no announcements nor exclusive demos but there was the entire team that made their games a reality standing around like average Joe’s, giddy to get to talk to fans. One of those individuals was creative director at Supergiant Games Greg Kasavin, who privileged me with a lengthy discussion about his games and views on the video game industry.

Indie developer Supergiant Games currently has two releases: “Bastion” and most recently “Transistor”. Both are action-RPG’s well known for their deeply imaginative universes, stunning artwork, beautiful and original soundtracks, fun fast-paced combat, and stories that are full of heart. 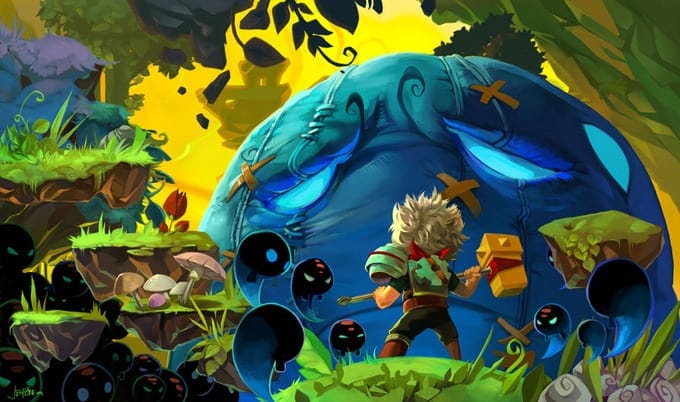 Inspiration for both games came largely from the Diablo series and most specifically “Diablo II.” The team looked at those games with a passion for action-RPG’s, accepted they would never be capable of making a game to the scale of “Diablo II” with such a small team, so asked themselves how they could create something they could make and still be a worthy experience.

A goal was for the player to never play the game and feel like when they play it they can checkout and just blow things up. They want both gameplay and story to be engaging the player enough to feel invested in what is going on.

Thus far, Supergiant Games has had some of the most impressive music to ever be created for video games and one of the best voices to narrate a game who took instant fame on the Internet upon the game’s release. The soundtrack to “Bastion” won the VGX awards for “Best Original Score” and “Best Song in a Game” for 2011. The narrator’s voice obtained such a fan base on the Internet that Valve Corporation hired him to do an announcer pack where he voiced all the dialogue of an announcer for “DOTA 2.” Despite the achievements of these two individuals, they were still stuck selling merch at the Supergiant Games booth, often entirely unrecognized by those who strolled through.

The soundtrack to both games felt impressive enough that the composer must have been working on those songs for a while and they just so happened to fit the theme to the games. I asked Darren Korb, the composer, if he was working on any music for their upcoming game but because development of the next game has not begun, neither had any music. Apparently all the tracks were made with the specific game in mind, making it no coincidence that they fit perfectly.

Transistor’s combat is like Bastion’s, but with an additional element where the player can stop time to plan out the next set of attacks. In turn, creating a more strategic focused combat rather than more of a demand on real-time reflexes like in Bastion. 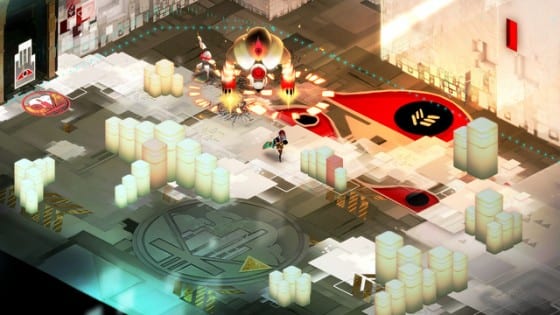 When asked about what the combat system of their next game would be, Greg said he did not have a clue. Though the team has a soft spot for action RPG’s, they love all sorts of games and do not feel the need to limit what genre they make.  He mentioned that when “Bastion” was finished he probably would have said their next game would use the same combat system but instead they ended up taking a more strategic route with “Transistor.”

Difficulty is something many games handle differently but Supergiant Games seems to have found a method to adjust gameplay difficulty that feels fun, rewarding, and fair.

In many games “the very first choice you make is the difficulty,” Greg said. “You are not equipped to make that choice because you have not played the game yet.”

Often games determine their difficulty by playing a numbers game where the enemy will hit harder and have more health. Sometimes games include the enemies to have a smarter AI when the difficulty is raised, like taking cover more often or having greater precision in their aim. Supergiant Games approaches it differently where as the player progresses and gets more comfortable with the mechanics, he or she is presented with the option to turn on and off certain modifiers. These modifiers could be things like “enemies enrage when at low health,” “successful enemy hits temporarily slow the player,” or “attacks have a chance to be reflected back at you,” and provide the player with a percentage increase in experience and currency depending on what modifier is chosen and how many. This lets the player choose exactly how they want to make the game harder, according to what modifier(s) they feel is best countered by their style of play. Playing with no modifiers can still prove challenging, but through trial and error one should be able to progress.

The difficulty modifiers were really made to see how far the developers could stretch the mechanics, which sounds like a much more fun approach than merely fidgeting with some hit point numbers. A goal was so if the player really wants to just experience the story, they should never hit a brick wall that frustrates them to the point of giving up; however, they want to reward the players who put the extra effort in.

According to Greg, gameplay, as it should, leads the game but story holds great significance and should properly accompany that gameplay, not overshadow it or barely exist. Greg believes that story should be just as much a game as the combat. Similarly as to how a player must put in effort to beat a boss, the player must put in effort to make sense of the story. Both games have a lot of ambiguity attached to the story. The games were crafted with a specific tale in mind, but it is the developers hopes that uncovering exactly what every detail of that tale means can be irrelevant to enjoying the experience offered, so long as players are still invested in what story they are creating for themselves. Greg mentions that with a combination of visual cues and music they can guide a player’s emotional trip through the story and place his or her own meaning to what is going. Telling the story in a method that is not quite clear allows it be more personal. It allows players the freedom to make sense of the story in a manner that means the most to them. For Greg, it is the experience that matters, not the perfect understanding of a specific plot point. 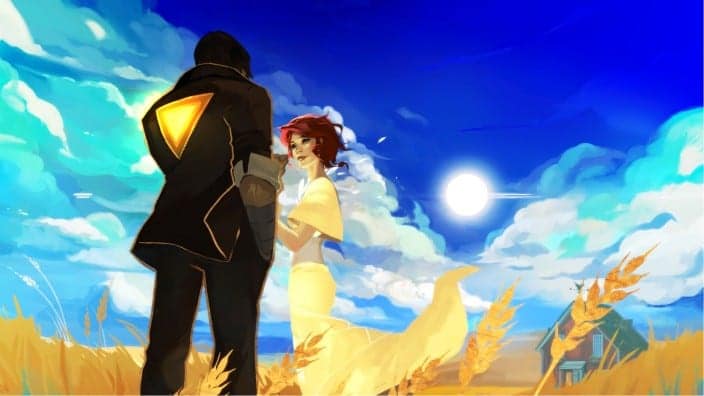 The Kid from “Bastion” and Red from “Transistor” both are silent throughout the entire game. Thanks to this, the player does not relate to the characters through exact statements, but through their actions. Actions the player has control of. It is hard to play either game and not feel as though some sort of emotional investment was made with the characters. The bond formed blurs the line between the character and the player.

Despite criticisms (though few in number), Greg would not change anything about either of their games. He feels confident that both games are a complete experience and exist strongly as their own entities in the video game industry just the way they are. He looks at both stories as being complete on their own and without need of a sequel. Despite that, he did mention the universe of either game may be seen again, but it is more likely that their next game will be set in another unique universe.

Supergiant Games is an indie studio. There is no way around it. Like any indie studio, they may never create something that has the publicity and demand of games like the Call of Duty series, but according to Greg he is “comfortable making games that aren’t for everybody, as long as some people have a really strong positive experience with it.”

Supergiant Games is not looking to sell copies, they are looking to give people experiences not yet offered in this world. Luckily, they have gained plenty of success from their hard work and passion for what they do. Regardless of the dedicated fanbase they have now built, they are in zero rush to put out the next game. According to Greg, one of the many perks of being an indie studio is they do not have some big corporation yelling in their ear to pump out a sequel. They have complete control over their development and feel comfortable enough to take their time and not rush things.

Spending years creating a game with a small team, unsure if all the time and money spent developing the game will provide any sort of compensation, is a scary process. Thankfully, the video game market can reward those who are willing to put in the time to make something special, no matter what it is or who it is supposed to appeal to. “The smaller audience these days can still be very big,” Greg points out.

He brings up how games like “Euro Truck Simulator” can outsell the Assassin’s Creed series on steam despite how niche of an audience one might think “Euro Truck Simulator” would appeal to. It shows that if executed well enough, the game can be successful despite the million dollar corporation’s existing as potential competition.

Supergiant Games has not begun development on their next game. They have not begun composing music, establishing a vision for the combat system, developed a universe, or anything. No pressure is felt to come out with something as soon as possible and that is just the way they like it. Looking at how original both their creations have been, their lack of pressure felt to form their next creation seems like an ideal way for developers’ creativity to thrive. Supergiant games will make another game. With the drive and passion they have for making these unique games that much is clear. They are satisfied with what they have created. It means far more to them to feel proud of what they have made than to make a fortune off of mediocrity. 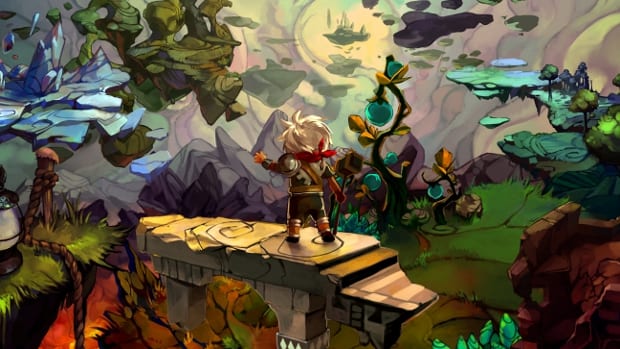 Greg Kasavin and everyone else at Supergiant Games will almost definitely be seen at future PAX events for anyone interested in meeting the visionaries behind Supergiant Games. “Day in and day out we’re just sitting at our keyboards” Greg says, “then we come to this show and see people like our stuff and it’s very surreal and moving. It’s incredibly motivating.”

Transistor is currently available for PlayStation 4, PC, Mac, and Linux.

Bastion is currently available for Xbox 360, PlayStation Vita, PC, Mac, and Linux and will be released on PlayStation 4 April 7, 2015.