In 1983, the founder of Heineken Beer, billionaire Freddy Heineken, was kidnapped along with his chauffeur. They were held for three weeks and ransomed for millions of dollars. It was the most famous kidnapping case since Patty Hearst. Unlike the Hearst case however, there was no twist to the Heineken story. Heineken was kidnapped and freed. Hearst was kidnapped and then brainwashed by her captors. She took part in numerous crimes with them and eventually was jailed for her offenses.

Which story would you want to tell if you were a filmmaker or a dramatist? 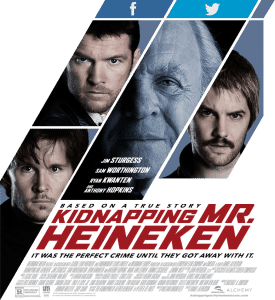 It’s not that Kidnapping Mr. Heineken, the 2015 movie about Freddy Heineken’s abduction, is a failure. Far from it. It’s an entertaining thriller stamped upon a bleak, blue European canvas. But what is billed as a fictional telling of true life events doesn’t require the real life events to be part of the story. The movie says nothing about the times or the character of Freddy Heineken. There are no delicious ironies nor is there subtext. The only thing that separates the movie from being a standard kidnapping film is the name Heineken. But since we never learn anything special about the man, the story does not fulfill its promise.

I don’t know much about the real case, but the movie seems to hue to the basic history. The film makes an effort to go beyond mere caper with a few key lines. As they are hatching the plan, one of the kidnappers says that crime is really a wager: “you bet your liberty against an immense payoff,” or words to that effect. And when Heineken is kidnapped he offers a prophetic and perhaps haunting take on the whole affair. He says, “In life, you can have friends or money, but you can’t have both.” In isolation these lines are interesting, but the film never uses either as a metaphor. It seems content to let them stand as probing lines of dialogue with no follow through of any complexity.

The cast is top notch, led by Jim Sturgess, Sam Worthington, and Sir Anthony Hopkins as Heineken—and they all perform ably. I took special note of Hopkins (how could you not?) because in this movie he feels more like Hopkins than Heineken. One is reminded of his portrayal of Hannibal Lecter in The Silence of the Lambs, as most of his scenes take place in a small, padded room where he is held by the abductors. He brings gravitas to the part but again to little effect. When you cast Hopkins you expect more than a few pedestrian scenes, and I kept waiting for the script to allow him to free (pun) himself. This does not come to pass, as Heineken is released and little more is said of him (or by him).

A viewer will have fun watching this movie, but it feels like a missed opportunity in a few ways. Perhaps I’ll drown my misgivings in a frothy cold glass of…well, you know.

The movie premiers in theaters and VOD on March 6, 2015