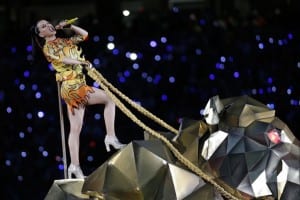 After watching Katy Perry’s halftime show at Super Bowl XLIX you are either shocked, silent or both. Perry came out on the stage on 40 foot tall, moving lion and opened up with 2013’s hit “Roar” then followed up with “Dark Horse” that featured dancing chess board pieces. But there is even more that would shock or silence a person.

For the beginning of the show, Perry was wearing a questionable ensemble of a dress with gold and orange flames on it with fire erupting in the background. After Perry changed into a tamer outfit that is when the actual ensemble and performance became questionable.

The mood of the show was brightened when Perry took the show in a different direction and performed the songs that made us all fall in love with her. She had her background dancers dressed up as smiling beach balls, palm tress, surfboards and singing sharks. That is the Perry we wanted.

Lenny Kravitz joined Perry onstage for “I Kissed a Girl,” accompanying her on guitar and even vocals but the biggest guest surprise was a comeback from Missy Elliot. Perry brought out Elliot to perform Elliot’s classic hits “Get Ur Freak On,” “Work It,” and “Lose Control.” Elliot has not released an album or singles since 2005.

Elliot and Perry did the dance from 2001’s “Get Ur Freak On” together and the crowd loved it. According to BuzzFeed, this was Elliot’s first public performance in years. Elliot’s appearance was far more memorable and surprising than Kravitz’s and will have fans guessing for weeks if she is coming back into the music scene.

For the of end the show, Perry rode off into the sky on the NBC’s infamous star from “The More You Know” campaign while singing “Firework.”

Perry’s halftime show is either something to be marveled at forever for its strange factors, including Missy Elliot, or something that we will likely forget about within the week. As if the actual Super Bowl game was not stressful enough Perry performance has us all questioning if this performance was good or not. She has us questioning if she was the right choice and if she gave us everything she could.

Overall Perry used her 12 minutes efficiently, even if the performance was underwhelming, and was powerful and energetic onstage but Taylor Swift is more relevant than Perry and would have been a better choice. Perry’s performance was mostly props and the introduction of Kravitz and Elliot with very little substance in between. 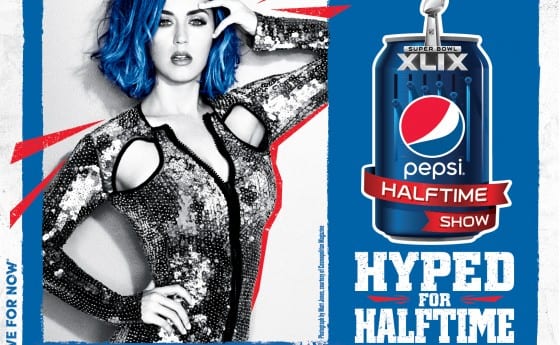