The trailer above was unveiled by head game director Colin Johanson. The trailer started with the highlight of the new beautiful zone Maguuma jungle, outlined to be separated into three distinct sections determined by the player’s elevation in the zone. A new method of traversing these varied elevations ArenaNet is providing a new PvE progression method called the Mastery system, which one example demonstrated will be unlocking hang gliders and everything unlocked throught his system will be shared account-wide. With no increase in level cap due to the nature of “Guild Wars 2,” progression in the Mastery system will not be limited to content immediately released in the expansion’s launch but will be continued throughout its continued Living Story releases, of which there have been over 40 of.

The next big feature announced is the ability for existing professions to embrace new specializations, unlocking a new weapon set, utility skills, and changing some of the core class game play. The example given was Rangers will be able to become Druids where they will gain staff abilities. Colin teased that Necromancers will be capable of using Greatswords but said nothing else regarding the matter. 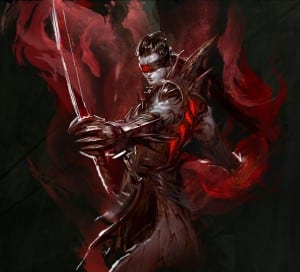 Until now, the only PvP game-mode available was a standard fight for control of three points called Conquest. Each map provided something new to the formula but it was all at its core the same. Now they are releasing an entirely new game-mode called stronghold, where teams will hire soldiers, battle for control of heroes, and storm enemy bases to assault their guild lord. This mode is made with guilds in mind but currently has no confirmed team size. To continue the trend of keeping guilds in mind they are adding Guild Halls, giving guilds a home for their fellow guildmates. For those who like to slay players in World vs. World (hundreds from three servers fighting for control of an entire zone), there will be a new Borderland with a larger focus on providing a more noticeable bonus to controlling certain locations in addition to rewarding those who defend.

“Heart of Thorns” provides exactly what “Guild Wars 2” needed to prosper. Instead of doing what every other MMO does and add a new level cap, “Guild Wars 2” sticks to being “Guild Wars 2” and keeps the level cap the same, allowing all the hard work players have put into their characters to remain relevant, keeping current content relevant in the future, and adds an entirely new PvE progression system with the Mastery system. Furthermore, they are putting a new system in place for professions to further diversify themselves through specializations, which will certainly expand over time in addition to a new profession entirely. The player slaying community should be more than happy with the new gameplay variety provided but to make them ecstatic ArenaNet has given them an entirely new PvP mode and a new WvW Borderland. “Heart of Thorns” does everything right and instead of merely keeping “Guild Wars 2” relevant, it is allowing it to thrive and soar to even greater heights.

There is currently no release date for “Heart of Thorns,” but the first playable demo will be available at PAX East in Boston.