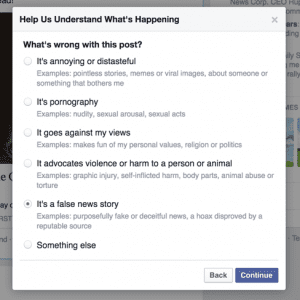 Facebook will work to reduce the pervasiveness of fake news stories, but it will not take down content.

Hoaxes are nothing new on the Internet. Nigerian Princes have been doing it for two decades.

But whether it’s dead celebrities, bikini bridge, or the girl who did NOT get kicked out of KFC, 2014 was apparently such a bad year for viral Internet hoaxes that Facebook is stepping up to do something about it.

That’s right…we’re so gullible to fake mermaid bodies washing up on shore that Facebook announced yesterday that it is added a feature for the lucid-minded of us to report and reduce the pervasiveness of fake news stories.

“The goal of News Feed is to catch up with your friends and find the things that matter to you,” wrote Erich Owens, Facebook Software Engineer, and Udi Weinsberg, Facebook Research Scientist on the Official Facebook News Site. “We’ve heard from people that they want to see fewer stories that are hoaxes, or misleading news. Today’s update to News Feed reduces the distribution of posts that people have reported as hoaxes and adds an annotation to posts that have received many of these types of reports to warn others on Facebook.”

“We are not removing stories people report as false and we are not reviewing content and making a determination on its accuracy,” the pair wrote in their blog post.

In fact, the move may be a bit too subtle. Facebook released this example of a post that was marked “false” —

What do you think? What’s your favorite Internet hoax of all time? Share your fake news thoughts below!