Nintendo’s latest version of its popular handheld is coming next month. Announced in this morning’s Nintendo Direct, the New 3DS will be available in red and black varieties February 13 for $199.99. The system is an improvement on the 3DS XL and comes with a better processing power, a face-tracking 3D camera, and a few extra buttons that can make an impact on how you play your games in the future. 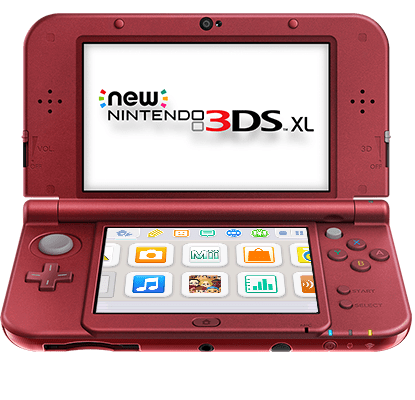 In fact, some games can only be played on the new system such as the upcoming Xenoblade Chronicles 3D while other games like Super Smash Bros. and the upcoming Legend of Zelda: Majora’s Mask 3D receive enhanced controls thanks to an added analog stick and extra shoulder buttons. The system also comes with NFC functionality allowing gamers to use amiibos with their games. Nintendo also is only releasing the XL version of the New 3DS in the US and Europe, foregoing the release of the smaller, customizeable handheld only available in Japan.

Coinciding with its release on February 13, two bundles will also be available for the Legend of Zelda: Majora’s Mask 3D and for Monster Hunter 4 Ultimate. Will you be getting a New 3DS?