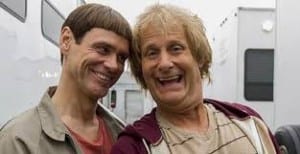 Dumb and Dumber To

The biggest disappointment about Dumb and Dumber To is that it was not filmed in Rhode Island. The directors of the movie, Peter and Bobby Farrelly are, famously, Rhode Island natives, and their careers took off in 1994 after the release of Dumb and Dumber, much of which was filmed in the Ocean State.

Again and again the Farrelly brothers returned to Rhode Island to film movies, but not so for their latest release, the sequel to the 1994 film. The film tax credits in Georgia, so it seems, were too great a lure, and so the Farrellys went South to shoot.

And that’s the real shame. Rhode Island may have one of the weakest economies in New England at the moment. It could have used the business.

Oh, what’s that you say? What about the movie? Well, if I must I must.

1994’s Dumb and Dumber was a road comedy about two imbeciles, Lloyd and Harry, trying to track down a woman. That’s all I remember about the plot, and that’s all you need to know. The movie’s strength was in the performances of Jim Carrey (Lloyd) and Jeff Daniels (Harry), and its outrageousness. Slapstick, pottymouth, sex jokes and bodily function humor were never earned so well in Dumb and Dumber. Furthermore, if you grew up in the 1980s or 1990s lines such as “So you’re saying there’s a chance?” were iconic.

Dumb and Dumber was, perhaps, the first post modern road movie. Post modern because it epitomized the maxim, “it’s not where you are going but how you get there.” The how was far more important than the where in Dumb and Dumber. In fact, the where was completely inconsequential, and the Farrelly brothers and their players made it work.

In 2003, there was a sequel/prequel titled Dumb and Dumberer. I never saw it, and it seems to have had minimal Farrelly involvement. By all accounts, it was nowhere close to the original.

The Dumb and Dumber universe lay unexplored for another decade when all the original talent was reassembled (with the interesting addition of a very non-Body Heat Kathleen Turner) for Dumb and Dumber To, which is the movie regrettably under review here.

It’s nowhere near as good as the first one, which is not a surprise. There’s a lot of the same cracker jack writing and there are certainly some yucks, but the main problem is we no longer care to learn much about Lloyd and Harry. The plot is beyond silly, but in truth so was the plot of the first movie. In the 1994 version, the characters were fresh and interesting. As stupid as their journey was, we went along because we had to know more about this inane yet endearing duo. In 2014, we don’t care to learn anything new about the characters, and any revelations about them are uninteresting to the point of desperation. That is, it feels like the Farrellys put only enough thought into the plot of this movie to buttress fart jokes.

In that sense, Dumb and Dumber To felt much like Ted, another crude and uproarious comedy during which you roll your eyes when the story line actually becomes a story line and you are asked to take it, if only briefly, seriously.

Thus, I won’t bother readers with what happens in Dumb and Dumber To. There’s a road. A car. Some stops along the way. Things exploding. People falling. Malapropisms and puns. Zigs and zags. You will laugh from time to time, but you need not know much else.

Without trying to sound dramatic, Dumb and Dumber To is a betrayal (admittedly, this is a provocative way of defining the movie). Much like the Star Wars sequels/prequels, you are lured into the theater due to the strength of the originals, but when the lights come up you feel hollow and angry your $10 didn’t go toward lottery tickets. In a larger sense, it is a betrayal to the people of Rhode Island and where it all began for the Farrellys. If you are going to make a bad movie, at least produce some benefit to the State where the film is set and where you scored so many previous hits. That would have been the smartest thing about this comedy, if it were true.