After traveling from Mansfield, Mass. and performing with Ed Sheeran, the guys of Rudimental got a chance to rest on their tour bus outside NAGA, a nightclub in Cambridge. The band was gearing up for a DJ set, their second performance of the night. Composed of four members from the UK—Amir Amor, Kesi Dryden, Piers Agget, and DJ Locksmith (Leon Rolle)—Rudimental is an EDM/Drum n’ Bass group touring the U.S. to promote their debut album Home, which was released in April of last year. Blast’s Cat Michaels sat down with Dryden, Agget, and Rolle before their second performance to learn more about the start of Rudimental, their influences, growing success, and their future aspirations.

Blast: Not being as well known in the US as in countries such as Europe and Australia, could you guys give a quick origin story about how you all met?

Agget: We went to school together from the age of three and grew up on the same roads. We loved music from an early age, used to DJ in each other’s bedrooms and play football together, or “soccer.” We grew up, you know, making music from an early age doing Pirate Radio, which are illegal radio stations in the UK. We met Amir and started making music together about six years ago with him and here we are now with our album Home and a couple hit singles touring the world. It’s crazy, in a nutshell. 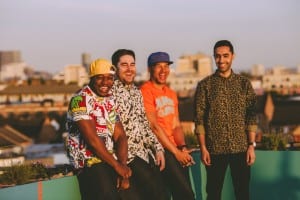 Blast: Your music is labeled as EDM/Drum n’ Bass, but you have vocals on all of your tracks. What influenced to make that decision and who were your musical influences in general?

Dryden: I mean, I think we grew up listening to lots of different styles of music and the soul influence is quite a big part of growing up were we grew in London. Our parents were very into soul music like bluesy jazz created out of soul and emotion. We just felt like vocals suited a lot of our tracks and we always wanted the right vocalists for the right track. We sort of went around doing A&R ourselves find different vocalists we thought would suit the right song.

Rolle: Growing up on the streets of London, Hackney is where we’re from, which is in London, is a very multicultural place, very vibrant. You could walk on our streets and be influenced easily. Those are some of the biggest things that have influenced us. Some of the people, like artists, that have influenced us are like Lauryn Hill, Sly and the Family Stone, and Massive Attack. Like people say, we have a lot of old heads on our shoulders. And then you’ve got the rave culture in London as well. The underground scene, old school jungle, old school garage, and the UK-ness of it all, which has sort of fused all of our music together.

Blast: What is the process of choosing a vocalist for one of your tracks?

Rolle: We are really stubborn about what kind of vocalist we want on our tracks. As you probably can tell, there is a similarity between all of them. They’ve got a soulfulness to them. For example, our first single “Feel the Love” was with John Newman, who was unsigned at the time, and we met him in a pub in the UK. He was playing his guitar doing an acoustic session and we thought he would sound wicked on that track. That kind of followed suit when we started hanging around with our friends that could sing and write songs. MNEK has a studio right next to ours and he is featured on some of our tracks. And then you’ve got Syron and Sinead Harnett, all coming to us in the same way. We’ve done the same thing so far with the second album, creating with some vocalists.

Agget: The second album is coming really soon. Not this year as of yet, but maybe 2015.

Blast: Do you guys assist in the lyric writing process?

Agget: We get involved in everything.

Rolle: Yeah, everything, from the writing process to the producing. The thing is, we are musicians, you know, we come from playing instruments and therefore it’s easy to get into the studio and just jam out.

Blast: Speaking of collaborations, you guys just came from Mansfield, Mass. tonight with Ed Sheeran. How has it been working with him?

Agget: Yeah, it’s been great! We did a studio session last year in LA and we did like four tracks with The Game and wrote “Bloodstream” with Ed Sheeran. We kind of developed a relationship because we are on the same label and we all kind of came up in the UK as well. He did loads of small pubs around the corner from us when he was starting out in London, so it’s like we’ve seen him grow and obviously he is huge out here. It’s great to see his show and see him hit the stage. We’ve got a good relationship with him and it’s great to be on tour with him, lots of fun.

Rolle: One of our tracks is featured on his album and he will be featured on our new album as well. So we are really excited and looking forward to getting it out to the public. It will be a new chapter in our lives. 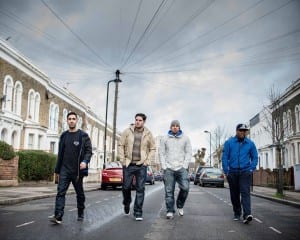 Fans can expect the new album to drop in 2015. Media credit to Big Beat Press

Blast: What vocalist would you like to work with next, or ever, if you could?

Rolle: Like I mentioned before, we would loved to work with Miss Lauryn Hill. We would love to revamp who she was in the past and bring her to some new stuff. We are big fans of The Fugees and The Miseducation of Lauryn Hill, that was great album.

Blast: What would you say to musicians who are starting out now? You guys all came from an underground scene, what advice do you have to offer to musicians starting from a similar point?

Rolle: One thing I would say is don’t expect it to happen overnight because it doesn’t. Even though it may seem like that for some people, for us, for example, Rudimental hasn’t been going on for two years; it’s been going on for many decades and pretty much all our lives. You have to keep believing and finding people that you trust. Most of all, share your work. Let people listen to it. That is very important.

Blast: You already mentioned your last album, but are there any other plans for the future or goals you want to meet?

Agget: Mostly the album next year and then going on a big world tour at the moment. We want to take the live show to the next level with the new album. In the future we want to deliver the same emotional quality of our music with soul, electronic music with soul. We want to look back in like ten years time with eight albums, or twenty albums, with lots of amazing gigs.

Rolle: Our main mission is just to spread the Rudimental message within our records whether it’s live, or whether it’s a DJ set. We’ve got a lot of spreading the love to do. This tour is helping, but there are still a lot of people that still don’t understand the Rudimental message. It’s not just about music, it’s a culture and vibe and we bring that when we perform live. For example, when we are live, there are nine of us on stage, sometimes ten. There is a brass section, a drummer, free vocalists rotating from live vocals and backing vocals, and us four. We all try to bring across that message.