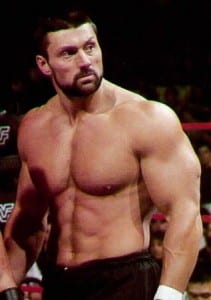 Guilty. I’m diving into the world of “hey, WWE should TOTALLY do this, and it would be so rad” blog posts. But as I’ve said before, this is my website, so I can do these kinds of things.

I’m a fan of WWE. I was in the 80s and early 90s; I backed off during the Attitude Era (but since began to appreciate it on the WWE Network) and returned about four years ago.

As I’ve reviewed what I missed by not following the action during the Attitude Era, I’ve started to appreciate what teams like the Dudley Boyz and Stone Cold Steve Austin did for the company.

Another Attitude Era player struck me: Steve Blackman. Simple entrance, catchy music, lots of weapons, martial arts, and not much charisma with the microphone.

He got a push in 2000 when he battled Shane McMahon at SummerSlam for the now-defunct Hardcore Championship, with a hugely memorable moment in which Shane gets “knocked 50 feet” off a piece of staging equipment, and Blackman follows him with a leg drop to win the title.

It was a classic scene and a top 50 “OMG Moment” in WWE history, but Blackman was forgotten in all of that. He was pushed as a hardcore wrestler, but he wasn’t a tables/ladders/chairs or “bag O thumbtacks” guy. WWE didn’t know what to do with a martial artist in 2000, and Blackman never got enough of a push. (He also lost half of his career in the 90s due to a freak illness from a mosquito bite in South Africa…)

There’s been some speculation that Blackman could come back. Although he’s 50, reports like the one below show that he’s in fantastic shape.

But I’m not suggesting he come back as a full-time wrestler and try to make a run at it. Here’s what I propose.

OK, bear with me. Heath Slater hasn’t exactly blown everyone away with his 3MB posse (two of which recently got fired…) and his country western schtick. Heath Slater, however, is a serious WWE talent and a three-time tag team champion.

There’s a reason why WWE has kept him on the roster.

Here’s what I do.

Cue the country music. Bring Slater out to do his one man band stuff. Same old Slater, right?

The Wyatt Family (or some other heels) come out and start to beat Slater to a pulp. We’ve seen this before — Slater is a bit of a punching bag.

Cue Blackman’s music. But instead of his usual, slow and steady appearance, walking out with karate sticks and raising his hands in the air, have Blackman run to the ring and martial art the bad guys right out of there, saving Slater and saving the day.

Then Blackman gives Slater a “pep talk” later, downplaying the need for “showmanship” and “gimmicks” and such. Rebrand Slater as a technical wrestler with a few good kicks and other tricks that Blackman can “teach” Slater, and you have Blackman in a managerial, paternal role as a no-nonsense overseer. 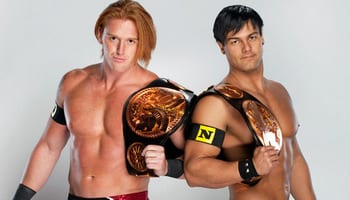 Or take it a step farther — have Blackman re-introduce Slater to Justin Gabriel, who hasn’t had a storyline in more than a year. Slater and Gabriel are former tag team champions. Re-introduce them, with Blackman managing, as tag-team specialists who can fly or ground-and-pound with the best of them. Give them a set of moves and tag team chemistry similar to The Rockers, and I think WWE could have something special. Plus, it brings back someone that will be more appreciated in 2014 while breathing new life into two stale characters.