Last month I put out a review for Space Jesus on his first ep “Atom and Eve”, and now the producer is back, except this time he’s a part of up-and-coming hip hop group #$ (Hash Money) with rap emcee GDP. This self-titled album called “#$” is filled with fresh instrumentals and gritty hip hop vocals. Space Jesus’s influence on this album is obvious, featuring psychedelic and future bass aspects. Listeners won’t be shorted on references to hash oil and marijuana strains. 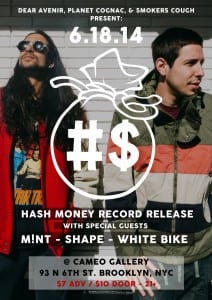 I think my favorite from this album is “Magic Wand (Feat. Hot Sugar and Froyo)”, because of the simplicity of its beat and the perfect laziness to the lyrics and vocals. #$ will be dropping a music video for “Magic Wand” in a few weeks, so keep your eyes peeled for that addition. Another interesting track is “Apathy”, which in my opinion perfectly blends the best aspects of both #$’s duo and Space Jesus. The song has an almost Arabian feel to it.

Plus, check out this promo for the EP below.