Last week, Blast’s Amina Ly got the chance to speak to Annalise Emerick, an independent artist based in Boston, MA, to talk about her rising success as a singer/songwriter and her upcoming album Field Notes.

Blast: So recently you decided to quit your job and pursue singing/ songwriting full-time. What pushed you to take that step?

Annalise Emerick: I started touring full time in March this year, but I’ve been touring on and off for the past 3 years or so. I wanted to really go for it and really start working on this music. Right now I have over 150 shows booked and I haven’t really been home since I decided to start. I decided I needed to make the leap from part time to full time so I could really focus on building a fan base and building a career and that really meant I had to go full time.

Blast: You’ve been on tour so consistently since you started your music career full-time. Where do you find the time to create new music?

Emerick: Not as much as I want to, and I felt dried up after my upcoming record was done. Songwriting on the road is hard. You can’t wait around for the muse or stay up late waiting for it to come to you. During the day you have to send tons of e-mails and there is a lot of driving around. Even on the days off it’s hard to not just use those days to chill and watch Netflix or hang out with friends.   Lately, I have been writing again–which is exciting. It’s scary when you haven’t been able to write for a while and to see that I still can is great. It’s been a transition, though, from always being creative to having to build the time to write into my daily routine. 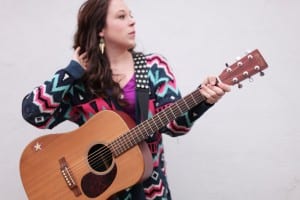 Blast: Have your shows changed or evolved in any way since you first began?

Emerick: It’s been really exciting because I’m having actual fans coming to my gigs. Not just people that know me personally. Now there are people coming who’ve seen me on the web or heard me on Pandora or read something in a magazine. It’s always really encouraging, and it shows that the hustle has really been paying off. The more I play the more opportunities I have to grow my fan base, and it’s exciting to succeed and play these shows.

Blast: Do you have a songwriting process?

Emerick: Definitely not. I don’t rush it and let the songs come. I wait for the perfect moment and it comes out.

Blast: One of the main things people will notice when reading about you and your music career is simply that you are a self-built independent artist. What would you say largely led to your growing success?

Emerick: Asking for what I needed and being okay with telling people that I need them to come to my shows. This means family and friends, but mostly the fans. It’s definitely about owning your own career. Some people are great artists and don’t put the time and work into the shows. It’s really important to just be out there. Even if I’m just touring one region if I can get people to come to my shows that’s what matters. Artists who aren’t into touring, I don’t know how they hope to build a fan base.   Now that I’m seeing fans come out to my shows, I’m trying to nurture that. Even after shows, some people will reach out to me on Facebook and I will respond personally and tell them I appreciate their support. Artists need them, and I make sure I tell them how much I appreciate them.   In the beginning, the goal was to get the record out and start working. I would try and get local college stations to play my music and I started booking shows. Now I’m doing that and focusing on the fans as well

Blast: So your EP Starry Eyed was released back in 2011 right around the time you moved to the Northeast, and you’re working on releasing a full album later this year. What have you learned from the first EP that you’ve applied to making this new album?

Emerick: The songwriting in Field Notes is a lot stronger. It’s showing that I’ve matured, as most artist should. I think I wanted to sound more like a grownup, and show that I’ve been doing this for a while. The recording process was mostly about letting it do what it needs to and taking the time to breathe. I have a tendency to rush and want to get it done and pressed as soon as possible but my producer was good about having me wait it. Sometimes I would have to sit on something for a week and give it time.   The PR is also a little different this time. Last time I just recorded and released the record, and it did well. This time, though, were giving ourselves the four months before the record comes out to get the press going and giving it the time to build up. I wondered about what would have happened if we did the same with Starry Eyed how it would have done, so we get to do it with this album to create that excitement and buzz.

Blast: So would you say the process of making Field Notes deviated much from that of Starry Eyed?

Emerick: Not really. We have the same band and the same studio as last time. So this has been about just letting the songs happen one at a time. The difference really is in the songs, not how they were made.

Blast: What were some of the major inspirations that went into Field Notes?

Emerick: It was about trying to keep track of what I’ve been exploring. I like the idea of an explorer in the wild taking notes and I tried to put that into the album. I also tried to create some happy love songs now that I’m older and have moved away from heartbreak.   When making the record, I wanted to make the songs mine and about my experiences but at the same time it has to be universal. I wanted to have songs that weren’t just about romantic love. One song on the album, “Sidewalk Chalk”, was about childhood friendship and platonic love that fades away with adulthood and how sad that can be.   There is also another song called “Twinkling Lights” about a summer camp I worked at in Maine and how special that place was to me. I feel like everyone has a place that means a lot to them, and there is place they can look to when hearing this song and it has this universal message.

Blast: What are you looking forward to in the next year? Do you have any plans after the album release?

Emerick: Yes. This year I’m touring full time. I’m totally booked until basically November and that’s exciting. I’m hoping to do a little tour with some other artists I admire in December. We’ll be together fro a few weeks. I’m also hoping to find an agent to book the shows for me but that’s about waiting for the right time and finding the right agent.   Touring-wise I’m thinking that I might do three weeks on one week off because it’s more sustainable, but for this summer I just really wanted to go for it. Hopefully I’m never going to go back to another job.

Blast: There may be a some people who will read this interview who’ve been thinking about starting their own music careers. What advice would you give to someone who wants to become a singer/songwriter?

Emerick: Definitely write good songs and put yourself out there and be ready to send about 400 e-mails a day. You have to put the work in and really become knowledgeable about about the business side of the music industry. If you want to become a touring artist, you’ll want to apply to competitions and go to other gigs. Most importantly, you’ll want to make friends within your music community in your city or town and start to connect with that world. It’s amazing how much relationships matter in the entertainment industry.

Annalise Emerick will be performing at the Midway Cafe in Jamaica Plain, MA on June 13.

Emerick’s newest album, Field Notes, will be out on September 16