The legendary Metal band Iced Earth is currently doing its U.S. tour to support their latest album Plagues of Babylon. After an amazing show in New York, the band rode to Massachusetts to hit the stage at the New England Metal & Hardcore festival with many other bands. 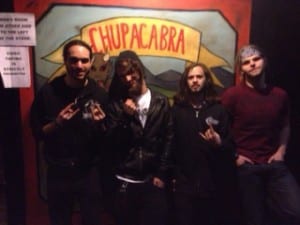 The band Carnivora won round 2 of the Metal Fest Series at the Palladium. Media credit to Break Thru Music.

Before I dive into Iced Earth’s amazing performance and the interview we did with Jon Schaffer and Stu Block, let me talk about the festival a little bit. The festival ran between April 17 and April 19. Besides many big bands such as All That Remains and Iced Earth, many great new bands had the chance to hit the stage and show their talents.

The festival is put on by Break Thru Music organization. Break Thru Music is one of the few companies in the industry who have dedicated themselves to new bands and giving them a chance in the industry. In essence, they are the light at the end of the tunnel for many bands. Considering the fact that music industry is a harsh one, and your success high depends on your connections, these guys are doing a great job, some sort of charity work for small bands. They provide the bands tools and assistance to help them on their path to success. The company was formed in 1994 and paired up with MassConcerts to provide bands access to big venues and experience with big bands.

As a part of this traditional festival, Break Thru gives bands the chance to battle to reserve a spot in the festival. As far as I know, any local band can apply as long as the list is not filled up. This year’s battles took place at The Palladium and Webster Theater between January and March. Both venues chose a winner, who would then play at the festival. The list of winners can be found on Break Thru’s website.

I could only make it to the last day of the festival, to meet up with my fellow metal heads. All the bands I have watched were great, but I can easily say Iced Earth killed it. Although they have been telling me, before the concert, that they were very tired after the New York show, no one could realize it while they were on stage. It was also their drummer, Jon Dette’s birthday that day!

The band opened up with their 8-minute title track “Plagues of Babylon.” The decorations and the lights were set in such a way that, they enhanced the depressed feeling the song was trying to give. One of the songs that cheered the fans was “V.” A Guy Fawkes mask was hanging on Jon Dette’s drums throughout the concert. After V, the band moved on to the song “If I could see you”, which Schaffer wrote for his grandfather. The last song that they played from the recently released album was “Cthulhu”. 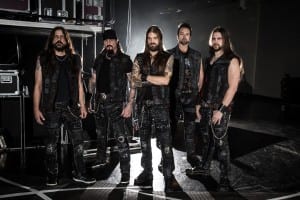 Just when we thought it was over, the band fired the stage up with the self-titled song of their previous album Dystopia. They finished the concert with the song “Iced Earth”. There were initially 15 songs in the set-list but because of time problems they had to cut out a few of them.

They are still on the tour, and I totally encourage you to catch one of the songs, I can guarantee you will have a great time with Iced Earth’s mystic sound. Below is our interview with Jon Schaffer and Stu Block!

Warning: reader discretion advised. The remainder of this article contains strong language that may not be suitable for all audiences. 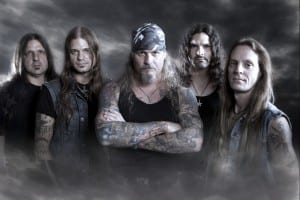 Blast: So how is it going ? The new album, tour?

Blast: What do you think about the reaction you have received so far about the album?

Blast: Anything that was really different in this album? Like in the songs, the recording process, something that you wanted change from Dystopia?

Block: No, not really. I don’t think so

Blast: I know it is not actually your thing but any chance for a music video? I know you guys have the lyrics video for Plagues of Babylon

Schaffer: Well that’s the thing. I find them gay since back in the 80s when we started doing them. I have actually even done a couple, still think they are gay as fuck and here we are no one actually cares about the music videos. You know what. They cost a lot of money, they put you in debt and they don’t do anything. Nothing happens since the only place you release it is Youtube.

Blast: So Stu, this is your second album with the band. How does that feel? Do feel more involved or something?

Block: Well, I actually didn’t feel like contributing much to this band at the beginning. I was more of on the fence kind [Schaffer laughs] where I sat there and made Jon do all the work. And in the second time, I said, “Hey man, can I write the word “the” in the lyrics, would that be cool? And that was my contribution.

Blast: You guys are a big band, and have been to many places. What is something you like about this? Or something that was hard about being in a new culture as a metal band? Especially in the U.S. versus Europe.

Block: Not for Iced Earth really. Iced Earth fans are royal everywhere so….

Blast: You guys are inspirations for us. For our generation, what I wonder is, is there any band that you can easily call out and say these guys inspired you?

Schaffer: I actually have some Frank Sinatra in my phone if you want to check it out. Neil Sedaka, he is pretty good.

Block: We are not actually influenced by anything. I guess we don’t like to be tainted by everything

Schaffer: We are influenced by life. Sometimes it sucks, sometimes it is awesome.

Blast: One of the things that is pretty popular among bands is this fan club thing. Do you think Iced Earth will have something like that?

Schaffer: No. The thing is, we tried so many times in the past. Certain people kind of ruin it after some time. It is also so much work.

Blast: Where do you think you would be if like this whole band thing didn’t work out ?

Schaffer: In music industry, if you have a backup plan, you set yourself to failure. I didn’t have a plan. I mean, I always had a plan but it was always something to do with the band.

Block: The plan is to succeed.

Blast: One of the points of this was battle of bands thing. What do you think about all the bands out there any suggestions to them?

Block: Yeah, get a degree somewhere and … don’t do this. There is no such thing as rock stars anymore.

Schaffer: Look in the mirror and get a job.