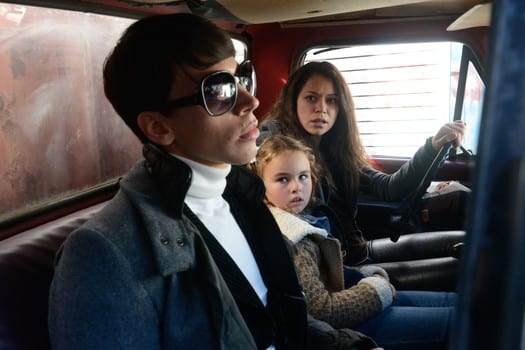 Something that I love about Orphan Black is that it never gives you a moment to settle. Rather than drag certain storylines out for as far as they can stretch them, the show has a tendency at dealing with the problem head-on, then moving on to the next one. There’s no reason to sit and stew in the show’s narrative because that would just be taking up unnecessary time when they could be introducing a newer, bigger threat.

On any other show, Kira would have been missing for at least a few more episodes. The fact that she was found by Sarah this week and that the fact that they were then able to get away was surprising as someone who’s used to the television medium’s often glacial pacing.

For the most part, all of the clones were on their own this week (Allison in particular) and there was new plot lines and again more moments where characters we want to trust align themselves with the unfavorable. We learned more about the dangerous religious cult, their obsession with the clones and Helena in particular. We hear about the group LEDA who Ms. S has some strong ties to—we just don’t know how yet. We see more of Rachel and Dr. Leeke and have to wonder how far on Cosima’s side Delphine is.

Sarah has the main plot as she and Art go looking for Kira’s kidnappers after her daughter makes a call to her that they can trace. There’s a moment before they go looking where she makes her typical promise to Felix about the three of them disappearing to somewhere new once she’s back, a fantasy he seems tired of having to buy into, and it’s interesting just how heavily Sarah relies on Felix for her idealized reality. She needs him to believe that they can have a normal future. He’s caught up in the clone mess but he’s also the one who grew up with her and that gives him the significance of being her anchor.

I still love Felix when he’s with Allison the most, but I’ll get to that later.

Sarah and Art hunt down the location where Kira called from and while Art gets distracted by a former suspect Sarah is taken, put into the trunk of a car and driven to a secret location under the guise of seeing Kira again.

When she gets out of the car she finds Ms. S waiting for, and telling her that she’s on her side and always will be and leads her to a cabin where Kira is being held. It’s where she first brought Sarah and Felix when they left the UK, marking one of their first hideouts. She reunites with Kira and tries to learn more about what Ms. S has been hiding from her. She shows her the photo her birth mother had given to her before she died from project LEDA and Ms. S has no recollection of what the group is or means. Despite this, something still rings false about her motives—she’s only sharing half-truths and when she tells Sarah she has a plane ticket to bring her and Kira back to the UK, leaving Felix and Sarah behind, we understand Sarah’s misgivings. Ms. S isn’t lying when she brings up how well-protected she’s kept Kira over the years, but how has she been doing it?

Sarah and Kira make a getaway later after Kira tells her that she too doesn’t trust her caretaker and there’s a highly reminiscent vibe of the getaway scene from Children of Men that makes you wonder just how heavily the showrunners are drawing from popular science fiction. The effect is tense and you have to genuinely worry about Sarah and the safety of her daughter when the man in the group runs after them, having aligned himself with the proletheans. Ms. S puts a stop to it though; realizing that the safety of those she loves has been jeopardized she goes into badass, fierce mother protector mode and kills both of the people after her two girls. Watching them drive away and the look of horror on Sarah’s face is one of the more touching moments that this show has had.

While Sarah’s storyline wasn’t the most interesting to watch this week it did allow us to see some of the progression that the show has made since last season. Art and Ms. S used to be my least favorite characters (along with boring Paul) because they did nothing to service the plot. I’d still rather see any of the clones onscreen but at least the side characters are being utilized in ways this year that make them useful rather than irksome.

Their portion of the story ends with her and Kira picking up Felix to drive away to somewhere safe where they can regroup.

The other clones aren’t having it any easier but with problems that hit closer to home.

Cosima is now under the watchful eye of Rachel and Doctor Leeke despite having her own lab to use. She is her own project but Rachel quickly adds another, telling Cosima that she needs her to look into Sarah’s biology and tell her why it is that she’s different from the rest, why she’s the only one who can have children.

We learn though in Helena’s side of the story that maybe that isn’t the case. Helena and Sarah are literally mirrors of each other—all of Helena’s internal organs are on the opposite side. So, maybe, the religious cult thinks, she can also give birth to children.

This and the heavy imagery they used about breeding cows makes me worried about what this poor, damaged character is going to go through this season.

Like always though, it’s Allison’s story that captures the majority of my interest. I don’t know what it is about how Tatiana Maslany plays her but something about her performance for this character in particular grabs at our sympathy. Her storylines starts at Ainsley’s funeral where all of her former friends ostracize her. Her husband is not too subtly egging her on to drink and the only nice face that greets her is a woman from the play who she wouldn’t have associated with prior to the mess.

She steals Donnie’s phone and in it see’s incriminating text messages that link him to being her monitor.

Felix comes to visit her during her play rehearsal and she has a minor breakdown where she tells him that she thinks it’s been Donnie all along which makes her hand in Ainsley’s death all the greater. Felix tries to calm her saying that she was hardly the one to kill her and the chemistry just works. Out of all the pairings and all of the characters, for some reason it’s Felix and Allison that work the best—Jordan Gavaris gets to have the most fun playing off of Maslany’s Allison and vice versa. They’re the characters you don’t expect to work which makes their friendship all the sweeter.

Which makes Allison a much lonelier character by the episode’s end.

After Allison catches Donnie in the act with Felix’s help she can’t feel the justice that she wants due to how alone she is now. She calls Felix needing his help, only for him to tell her that he’s leaving for a while with Sarah and Kira. She says she’s being deserted even by her own clones now and he tries to reassure her but watching her in her own home, isolated and drinking again, it’s hard to agree with him. Out of all of the clones, Allison is so watchable because she’s the most down to earth and her world is the one that seems to be breaking down the most. I hope her play goes well at least because they’ve been comedic highlights of the show and I don’t know how much more they can put on this poor character’s shoulders.

It’s another strong episode that keeps the action and plot developments moving.

The episode stirs up an idea that’s been floating around the outer sphere of the show since its creation and that’s the idea of science vs. God. Some people think of the clones as miracles, some think of them as abominations. All think they are pieces to inspect and to use as tools of their higher power. None of them see the clones as human, an idea which isolates our group even more from the outside world. No matter who is seemingly trying to help them, just wants a way to control them, a way to pull the strings so that the outcome aligns in their favor. The proletheans versus the men and women of science. While the idea of the religion versus science isn’t a new one—hell, it isn’t even a new one for this show—it is one that’s being fleshed out and for the story it’s in and for the characters it’s targeting, it adds a whole new level of threatening.