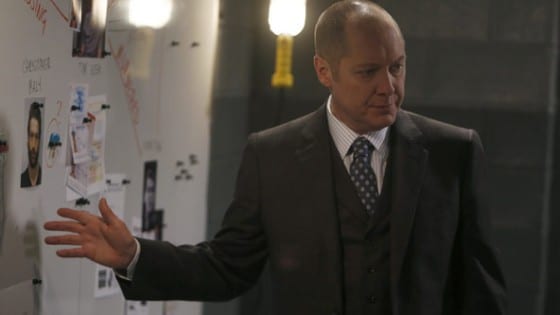 This week gave a short glimpse of the show I actually want to be watching. It’s not that I don’t like The Blacklist the way it is, but the prospect of Elizabeth going rogue and making a little family of badass criminal folk with Red and Dembe is unbelievably appealing, don’t you think? Maybe they could get Ressler to join!

In actuality, this only happens for a short segment near the end of the episode and Elizabeth leaves them in a rather disgusted huff, but still, it’s started the cogs in my mind.

The case follows a Blacklister with the unfortunate name of Milton Bobbit, who goes by the equally unfortunate pseudonym of The Undertaker. Okay, seriously, what is up with these names? The Stewmaker? The Courier? The Undertaker? I will confess that my knowledge of the international organized crime underworld is a bit rusty, but I feel like they don’t name themselves like bad Batman villains. Feel free to jump in and correct me if I’m wrong.

We’ll give the Undertaker a pass, however, because his nose is removable and he frequently just walks around with a giant hole in his face like a skull. So perhaps he warrants a Batman villain name. I’m really not sure how or why he got a prosthetic nose; that was all a bit confusing. All I know is that he can reattach it in like three seconds and somehow get it perfectly straight. Good on him, I suppose.

The Undertaker’s deal is that he convinces terminally ill people to carry out assassinations, committing suicide in the process. In return, he gives their loved ones significant amounts of money. We see a taxi driver kill himself and his passenger by hitting a large truck, and a woman burn herself and another man to death at a gas pump. Both deaths look like suicides or accidents, but after Red’s tip, the FBI realizes they aren’t. They’re able to prevent a third man from shooting a politician. “Is this really how you want to die?” Elizabeth asks him, and he puts down the gun. The FBI find that all the killers had a life insurance policy with the same company, and trace the assassinations back to Milton. Based on a tip from his coworkers, the FBI agents find Milton in a cemetery with a hostage. His MO has changed and he’s now taking out the people involved in an illegal medical trial from years early that gave him serious side effects (including, but not limited to, a missing nose). The newly wild and emotionally unstable Ressler ends the stand-off by walking in, grabbing and arresting the hostage, the leader of the trials, and walking off, totally aware and okay with the fact that Milton is going to kill himself.

There, now that that’s out of the way, we can discuss what everyone actually tuned in to see: the fallout of last week’s cliffhanger. Elizabeth finally, FINALLY knows that her husband is a creepy spy man. In his oblivious manipulative way, he asks her to renew their wedding vows. Is that a thing people do at like 30? After he leaves, she goes of the deep end for a few minutes, smashing about their house, and then buckles down and decides to actually deal with life. It’s thrilling, because I feel like I’ve spent all season waiting for this silly girl to pull her head of the sand and grow up. In this episode, she finally realizes that everything is not okay, and that she needs to fix it. I love Elizabeth this week and I hope this is an upward trend I’m seeing.

To deal with the problem, she goes to make herself a nice serial killer billboard. I’m pretty sure I could have spent a whole paragraph questioning the usefulness of a serial killer billboard, so I’ll just grumble quietly to myself this week. Red arrives with some sandwiches (Eartha Kitt’s recipe, of course), but Elizabeth wants to know the secrets he’s inexplicably hiding. Red tells her that he noticed Tom buying fake passports, tipping him of to the duplicate nature of the man, and that he likely is getting close to Elizabeth because of her connection to Red. “How are we connected?” Elizabeth screams in response to that, smashing and destroying more things, but I think they’re probably warranted this time considering he still refuses to tell her or explain why he won’t tell. “Right now the only thing that matters is the immediate threat: your husband. Finding out who he is and who he works for. The rest will come.” Translation: “I need to string that out until at least the season finale or the producers will get mad at me, hun.” Lizzy, never one to sabotage her chances at a season three, acquiesces.

Later, Elizabeth tells Red that she’s really uncomfortable with pretending to love Tom and sleeping with him and all those things that are terrible when you know the person in question is spying on you. Red basically says, “Tough, cause I need help tracing the organization that’s spying on me.” Stay classy, Raymond. To accomplish this, she manages to invite all her friends, including Tom’s “brother,” over on short notice and surprises him with a vow-renewing ceremony the very next day. The brother, Craig, another spy, thinks Elizabeth is onto them, but Tom is sure he knows how to read his wife. Yah, you’re doing great buddy, especially considering her vows end with “I have a feeling this is going to be one hell of a ride” and you don’t pick up on any lingering double meanings.

Elizabeth finds a key hidden under a lamp in her house, but can’t identify it. She also gets Craig’s fingerprints, which she gives to Dembe when he stops by. “This paint. What color is it?” he asks about her house’s walls, responding to her answer with a somehow tough-sounding “nice.” Dembe’s cool, guys.

Red meets a friend in El Salvador who can help identify who Craig Keen actually is with the fingerprint, which leads to a funny interaction where they discuss how Red’s apparently slept with the man’s wife. However, Red wins him over, and offers to introduce him to a “ravishing dame who would adore you. She’s slightly cross-eyed and there’s something hypnotic about her gaze.”

After Elizabeth captures him, she leaves him with Red who rants about a Hansel and Gretel puppet show and Bob Ross, which are both about as related as it sounds, all the while threatening not-Craig’s actual mother.

This investigation leads to my favorite part of the episode. Elizabeth finds Red and Dembe laughing at the television with Craig tied up. The three of them work together questioning him, getting him to mention Tom’s real brother in Chicago and a woman named Nikki that is also connected to him somehow. It’s going well until he manages to throw himself out a window to his death. “Okay then.” says Red, before leaving with an order for Dembe to grab the yogurt-covered pretzels from the minibar. It’s really just a short scene, but the rogue pairing of Red and Elizabeth is much more fun than the FBI standing around all the time. With her hiding the truth about Tom from all her co-workers, it seems likely that we’ll get more of this rebellious, looser-wound Elizabeth. Red searches through Harold’s accounts for information on The Undertaker’s clients for some unexplained reason, while Elizabeth goes home and has the creepiest make-out session ever.

In Craig’s last moments, the gang learns about “Berlin,” something related to the people hunting Red. Is it the city, or, as a few friends suggested to me, a person? With all these questions, Blacklist better serve up some answers soon.