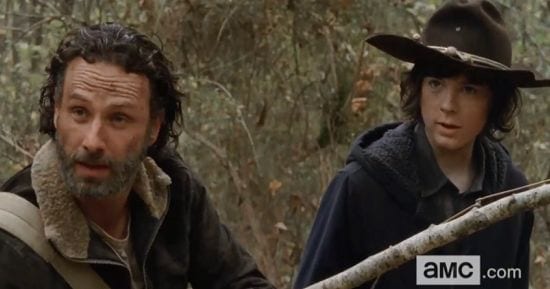 Well, that was…violent. If you haven’t seen or read about the episode yet, I feel compelled to put a trigger warning here that it contains attempted sexual assault of a minor. If that’s in any way difficult for you to watch and/or read about, I’d be careful about what you consume regarding this episode.

The opening to “A” is a flashback to the idyllic days at the prison, back when Hershel was alive (still sad about it) and Rick was learning to be a farmer. In a flash forward to present day, Rick sits against an abandoned car, shaking and covered in blood.

The plot really starts the day before Rick ends up doused in someone else’s blood. He, Carl and Michonne are on the hunt for food, and they talk about Terminus as they go. Carl wants to know if they’ll tell the people there everything about them and what they’ve had to do to survive. I’m thinking not so much, especially after what happens in the rest of the episode.

Rick teaches Carl about trapping rabbits and tying slipknots, which is a neat throwback to Shane teaching Carl about knots way back when. All this talk about trapping animals both in this scene and in another Hershel flashback had me nervous; turns out it was great foreshadowing for their arrival in Terminus.

The father/son bonding time ends abruptly when a man cries out for help in a clearing. He’s alone, and has somehow managed to get himself surrounded by a pack of zombies in an open field. How he managed to get this far, we’ll never know, because Rick holds Carl back from going in to save him. The walkers eat his face pretty quickly, and it’s definitely in the top five grossest ways a walker has eaten a human on this show. Props as always to the makeup and special effects team for making me regret snacking while I watch.

Another mini-flashback strikes, this one featuring Beth taking care of Judith and a reminder that Hershel gave his watch to Glenn, which is useful information later when one of the Terminus guys pulls said watch out of his pocket.  They’ve done more flashbacks recently than they used to, and I generally like how they’ve been used, especially Michonne’s dream sequence flashbacks. The ones in this episode provide good information and foreshadowing, but overall feel like they don’t quite fit where they’ve been placed.

Present day Rick and Michonne are talking about Terminus by their campfire when a twig snaps in the woods and suddenly Joe has Rick at gunpoint. For a bunch of guys who couldn’t contain their noise in a house, they sure got sneaky out in the woods. Joe says the day of reckoning has arrived, and he starts counting down to when he’ll shoot/beat Rick, but Daryl interrupts him. Good old Daryl; he may have adapted to this group to survive but he’s no traitor. In fact, he offers himself instead of Rick if Joe really needs blood to avenge Lou.

Joe’s not really in a deal striking mood, so he has a couple of the guys start beating on Daryl for telling them the lie that Rick and the others are good people. Another of Joe’s guys (the creepy one who looks like he belongs in Pirates of the Caribbean) grabs Carl from where he was sleeping inside the car. This scene is pretty much straight out of the comics, but I imagine folks who only watch the TV show found it a little much. I mean, I was unsettled, and I knew it was coming. Joe’s plan is to beat Daryl to death, then help themselves to Michonne and Carl. Michonne’s held up at gunpoint just like Rick, but Carl’s already been pinned by the creepy guy.

Just like that, Rick goes into his scary mode, complete with that weird camera angle close-up that always came along with his hallucinations last season. Carl is crying and struggling to get free, and that’s all that matters to Rick. When Joe grabs him and Rick can’t reach a weapon, he straight up bites Joe’s throat out to get free and save his son. Which, naturally, he does, slicing open the creep from stomach to throat. Andrew Lincoln is much better at being scary Rick than he is at being sad Rick. The intensity he pulled out in this scene was incredible.

While it’s heartbreaking to see Carl take refuge with Michonne rather than his father after everyone’s been taken care of, it’s also totally understandable. If I saw my dad literally tear a guy’s throat out with his teeth to save me, I’d be grateful but also definitely not want to go near him for a little while. At least not until he washed his mouth out.

There’s another mini flashback here, with Hershel teaching Rick about ways to domesticate animals and grow crops. He wanted to teach Rick so Rick could teach Carl, and show his son “the way.” He asks which way Rick is going to show him, and a shell-shocked present day Rick is wondering exactly that as he sits outside the car, covered in blood and shaking like a leaf.

Michonne and Carl are inside the car, trying to rest and recover while Rick talks to Daryl outside. Daryl offers him some water to clean up a bit, but Rick doesn’t want to waste it. They sit there side by side and catch up with each other: Daryl shares that he got out with Beth but that she’s just gone now, and he apologizes for Joe’s group. He didn’t know they were tracking Rick until they had found him, and he didn’t know what they were capable of doing. There is so much pain in Daryl’s voice and face (you go, Norman Reedus), Rick immediately reassures him that it wasn’t his fault. I never realized how much guilt Daryl internalized until his breakdown outside the cabin with Beth, but Rick seems to know instinctively that he’d blame himself. He even calls Daryl his brother in tonight’s only aww-worthy moment.

The four of them head off to Terminus, and Rick suggests not just strolling in the front gate since they don’t know who these people are. He has them spread out along the outer fence to see what they can find out, and Carl refuses his offer to stick with him. He chooses to go with Michonne instead, and I’m so glad he did because Michonne finally tells us more about her son. They were in a refugee camp and she had been out on a run when the camp was overtaken by walkers. The fences were down when she got back, and Mike and Terry had been high when it happened so they ended up bitten. She didn’t kill them to prevent their turning, she just waited until they did and then took them with her. She didn’t know they’d end up disguising her as another monster.

The idea of becoming a monster has always been part of the show (after all, everyone turns into a zombie eventually) but it’s been an especially big theme this season. The Governor turned into a monster, Rick was afraid he’d turn into one, and now Michonne is worried Carl sees his dad that way. Carl’s upset not because he thinks his dad is a monster but because he thinks he’s one and that Rick doesn’t realize it. Michonne gives him a hug, and I’m so glad they’ve found a mother/son relationship in each other, even though it’s very different from the ones they used to have. Carl needs someone who isn’t his dad to talk to, and Michonne needs someone to care for.

After their short info-gathering session, they hop the fence into Terminus. There’s a woman recording the message Daryl and the others heard in the car radio, and other folks working near her. So it isn’t just sketchy Mary and her barbeque here, that’s good to know. They’re introduced to Gareth, who seems to be the leader (at least in this building), and Alex, who’s been tasked with taking them to the real welcome wagon.

They meet Mary, who’s apparently the official Terminus receptionist, and she says it was smart of them to come through the back door. She says Terminus has been around practically since the beginning of the outbreak, and that they let people in in order to get stronger. Yeah, by ingesting them. She hands the gang a plate of food apiece but they don’t eat. Instead, Rick wants to know where Alex got that watch from (I told you it’d be good to remember that flashback), or where they got the poncho, the riot gear, or that backpack.

Alex is a terrible liar, claiming to have got them off dead people. Too bad scary Rick mode has already been activated, because he’s not in the mood for this crap. He demands to know where his people are, and it breaks out into a firefight. The snipers on the roof are driving them somewhere (either that or they’re the worst shots in the apocalypse), and the four of them end up in a creepy building full of candles burning everywhere. There are names on the ground, and cries for help coming from somewhere else inside, and the walls read “Never again. Never trust. We first always.” Not only are these guys potentially the cannibals from the comics, but they also have a terrible grasp on sentence structure.

Rick and the others end up surrounded outside, clearly led here by the gunfire just like any other wild animal they talked about trapping. They’re ordered to drop their weapons and get into a traincar marked with an A. Finally, the episode title makes sense. They do so grudgingly, Rick first (as ordered). When their eyes adjust to the gloom inside, they see Glenn and the others emerge from the shadows. Maggie explains that the others (Abraham, Tara, Eugene, Rosita) are their friends and good people. Rick looks like he might recognize Tara which could get ugly, but he doesn’t say anything now.

There’s another flashback to Rick’s days as a farmer, planting crops with Carl and Hershel in the prison yard. Rick playfully puts Carl’s hat on Beth, saying there’s a new sheriff in town and that Carl will need a farming hat now. I can only hope the point of this flashback is to let us know Beth will be back in a big, badass way. Otherwise, why stick it here at the end when it’s supposed to be all suspense?

In the boxcar, Rick says these guys are going to feel pretty stupid when they find out. “Find out what?” Abraham asks, probably hoping Rick has an actual plan of attack in place. “They’re screwing with the wrong people,” Rick replies, dashing all my hopes of an actual cliffhanger. He is lit nicely, with shadows obscuring one of his eyes a la The Governor’s eyepatch, so shit is definitely going to get real next season.

Overall, though, this just didn’t feel like a Walking Dead season finale. Where was the epic ending twist to keep us all talking until October? Where was the breakneck pacing and the nonstop action to make up for any slow episodes that we didn’t like over the course of the season? Where was the major character death? (Not that I’m complaining about that one, it just feels odd to make it through a season finale with everyone pretty much intact). The acting was great, but after all the hype and the great episodes we’ve had this season, the finale was pretty anticlimactic.