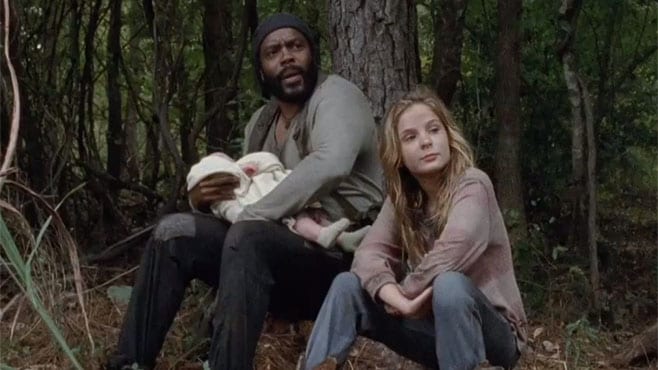 Well that was one of the most intense, dark, and well-acted episodes of The Walking Dead to date. Unless something truly spectacular happens in these next two episodes I’m going with “The Grove” as my favorite of the season.

It had everything that makes me love this show: heavy character focus, crises of post-apocalyptic mortality, foreshadowing that played out in twisted, unexpected ways, callbacks to the comics, and of course Carol. There was lots of Carol in this episode, and Melissa McBride did an absolutely wonderful job of portraying her as both that mother we used to know and the hardened person she’s become since season one. Atlanta camp Carol could never have made the decision to take out Lizzie, let alone be able to be the one to pull the trigger.

I hadn’t expected to get an episode solely focused on Carol, Tyreese, and the girls as they journeyed to Terminus. I figured they’d get thrown into a mix of an episode that looks at everyone’s first arrival to the supposed sanctuary. Much to my surprise, I got complex character decisions and tears all over my face.

Poor, poor Mika was destined to not survive the episode the second Carol compared her to Sophia. The parallels were all over the place, starting with the use of the phrase “not a mean bone in her body” to describe them both. In her first conversation with Lizzie, Carol agrees that her daughter being so sweet was what led to her death. It seems easier for Carol to talk about Sophia now, and though she grieves for her still, she’s tried to use that grief to do good by the other kids of the apocalypse.

She tries to help Mika toughen up over the course of the episode. Mika’s okay with killing walkers because she knows they’re bad, but she can’t see any situation where she’d be okay with killing a person. She isn’t even able to kill the deer she and Carol find near the pecan grove. Carol tries to give her the zombie apocalypse version of the stranger danger talk, desperate to impress on her that sometimes there will be people it’s necessary to kill for your own safety, but Mika doesn’t believe that. Mika believes in things working out for the best and in eating peaches and pecans and in naming dolls things like Griselda Gunderson.

At first, things look great at their new digs: plenty of well water, tons of pecans, wild deer, and a real house to shelter in. Tyreese and Carol even debate staying here instead of heading to Terminus, and it would’ve been a picture of domestic bliss if they had. Hell, the stove even miraculously still had gas in it to boil water for the creepy tea kettle whistle from the cold open. (But seriously, how eerie was that image of a normal kitchen juxtaposed with Lizzie playing zombie tag out in the yard?)

Lizzie’s big problem is that she can’t seem to conceptualize the zombies properly. She just sees them as different, not dead, and certainly not a threat. That’s why she names them and feeds them rats. She protested the killing of walkers multiple times throughout the episode and it seems that watching people put them down sends her into some kind of panic attack.

I’m incredibly intrigued by what might have been going on with Lizzie, and I wish we could have had more time to explore her history. Clearly she was dealing with some issues pre-apocalypse, since Mika and their dad had established techniques to calm her down. I can’t imagine what it would be like to struggle with some kind of mental illness during the end of days. There’d be no way to seek or continue medical treatments, and there’s certainly no therapy appointments in the zombie apocalypse (though everyone could use some, that’s for sure).

I’d like to take this opportunity to state my policy on Lizzie-hate: don’t do it. No one should be celebrating this character’s death or calling her a psychopath or saying she deserved what she got. This character clearly had issues, and Brighton Sharbino did an absolutely incredible job playing the nuances of Lizzie’s emotional outbursts. I’m not saying what Lizzie did was remotely okay. I mean, she murdered her sister in cold blood for crying out loud. I’m just saying that we can have far more interesting conversations about her than mindlessly spewing hate, that’s all.

The really terrifying thing about this episode was that it looked so safe, yet it all turned out so horrible and wrong. Even when there were walkers following the girls back to the grove, they were dispatched with relative ease. I thought Mika was going to meet her fate right there at the fence when she got stuck, but Carol, Tyreese, and Lizzie managed to get her free. (Side note, those burnt walkers were some of the grossest, coolest walkers they’ve come up with so far, were they not?)

With all the running around and pure surviving they’ve all had to do lately, I think everyone forgot about the simple danger of other people. In this case, that danger was Lizzie. My stomach dropped when Carol and Tyreese came back from their walk (complete with one dumb “deer nuts” joke) only to find Lizzie’s hands dripping with her sister’s blood.

And Lizzie just stood there smiling like she did something good, like she’s expecting praise from the adults she loves for what she did. “It’s okay, she’ll come back, I didn’t hurt her brain,” she explains in a line lifted straight from the comics. Tyreese looks horrified, and I’m pretty sure I sat there staring at my TV with the same slack-jawed, bug-eyed look of disbelief and nausea that he wears here.

We all knew Lizzie was messed up, it’s been illustrated and alluded to quite a bit over the course of the virus arc in particular, but I don’t think any of us guessed she’d go this far. Well, maybe some people did after she nearly smothered Judith, but I certainly didn’t expect any of her issues with walkers to come to a head until after they joined a larger group.

Again, serious hats off to Brighton Sharbino for her work in these scenes. It can’t be easy to play a girl who’s just murdered her sister and doesn’t understand that it was wrong, but she certainly knocks it out of the park.

Carol manages to talk Lizzie down despite her own emotions, and would probably have succeeded as a hostage negotiator if they still existed. Lizzie confesses off-screen to Tyreese about feeding the walkers and dissecting that rabbit from the prison, which he relays in an info-dump to Carol. They halfheartedly discuss their options, but the conclusion to this whole sad chapter can’t be avoided.

Lizzie and Carol go for a walk in the grove and I like to think that if she had shown remorse or understanding of what she had just done that Carol would have let her live. As it was, however, all Lizzie could think to apologize for was pulling that gun on Carol to keep her from getting to Mika. It’s so sad that she couldn’t comprehend what she had done, and even sadder to think that in different circumstances she might have been able to pull through whatever was a little bit off in her hard wiring.

As it is, I cried for the first time since Hershel’s death as Carol told Lizzie she loved her and to look at the flowers before she pulled the trigger. Bless whatever broadcast restriction or writer’s decision that led to us not having to see Lizzie get shot or witness Carol putting Mika down before she reanimated, because I could never have handled watching that. Just watching tears roll down Carol’s face as she had to destroy yet another surrogate daughter was hard enough, thank you.

It seemed almost anticlimactic to get Carol’s big confession to Tyreese after all that heavy emotion. Melissa McBride and Chad Coleman do a wonderful job playing this quiet scene, though. They sit there in shock and grief, and Carol pushes the gun across the table to Tyreese before admitting to killing Karen and David. In the wake of what they just went through, it almost doesn’t seem to matter, but she tells him to do what he needs to do.

Tyreese reacts much differently than Rick did, or even than I think he himself would have reacted before Mika and Lizzie’s deaths. He’s only briefly angry, and even then it’s silent: he just grips the table so hard he could break it, and grabs for the gun once before moving his hand away. Instead of yelling or punishing Carol he simply asks if Karen suffered at all (to which Carol says no) before forgiving her. He won’t ever forget it, he takes care to point out, but he forgives her for it. I think if he wasn’t part of another of Carol’s tough decisions he wouldn’t have the insight to truly forgive her. Now, he has seen firsthand what awful things you sometimes have to do in order to survive or ensure others’ survival, so he can understand.

The two of them pack up, take Judith, and head to Terminus because all that’s left in the grove is horror, grief, and what could have been happiness.

Judging by the sneak peeks we should see most of the other characters next week, and the ramp-up to the season finale should have plenty of twists and turns to tide us over until the trademark finale cliffhanger in two weeks.