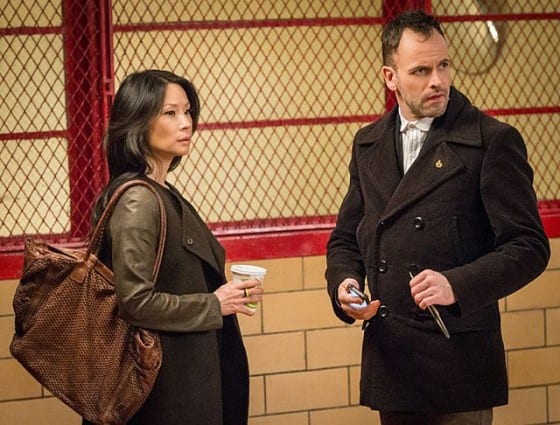 Joan (Lucy Liu) and Sherlock (Jonny Lee Miller) must find a kidnapped woman with a pair of ears as their clue.

We should all take a deep sigh of relief at the restored quality in this week’s episode of Elementary. Sure, there was still a case of the week taking screen time but it was the character stories and poignant parallels between Lestrade and Joan that took center stage.

Lestrade, played by the entertaining Sean Pertwee, is back for another episode this week and as Sherlock announces, he’s been with them now for 19 days and has already overstayed his welcome. To pass the time Sherlock is working on diffusing an explosive that a friend rigged up for him to test his abilities. He says he’s never failed but still, Joan leaves to go and see what Lestrade was complaining about.

It seems that Sherlock has kept his two roosters and they’ve caused a ruckus in Lestrade’s room and he needs Joan’s help to get rid of them. She sees the possible job inquiries stacked up on his desk and asks him when he plans on choosing one and he says soon and that maybe Joan should take a look at some of them and get out from working with Sherlock.

The case they’re dealt with this week happens after a man, Gordon, receives what he presumes to be his wife’s ears in a box. While being interrogated he tells Captain Gregson, Sherlock and Joan that years ago when his wife disappeared the police believed he had killed her but since there was no body there was no case. He has received periodic calls over the years from his wife’s kidnappers and sometimes they would put Sarah, his wife, on the phone with him. He paid a large ransom in hopes that she’d be returned but to no avail. This means that Sarah could actually be alive.

Joan is called away from the station to go and deal with Lestrade who has left his keys inside the Brownstone. Upon arrival she finds him all banged up after being mugged but her sympathy only lasts until they’ve passed the threshold when she smells alcohol on him and demands that he tells her where he’s been drinking. When he says he’s been sneaking drinks out back and has had whiskey in the Brownstone she lashes out and says she can’t bring that into their home with Sherlock being a recovering addict. She says that he can’t stay if he keeps this up.  Lestrade makes a crack at how Joan will learn soon that she too can be discarded and like Lestrade won’t be thought of as special by association with Sherlock Holmes.

Lucy Liu finally is allowed to bring some hostility in this scene and it instantly rejuvenates how she plays the character.

The next step for the police doesn’t require Sherlock or Joan’s assistance. They’re tracking the kidnapper by setting up a staged ransom exchange, but it goes astray when Gordon goes after the man and in an attempt to stop him, kills him.

Joan and Sherlock are back on the case to figure out who the man had been. It turns out he was a recovering addict of sorts and would have been attending AA meetings somewhere around the city. So that’s their next hit.

First, Joan drops off some files about recent muggings for Lestrade to go through, hoping it will help him find his backbone again. As much as I enjoy Pertwee and how he plays the character, I couldn’t help but be just as annoyed with him as Joan and Sherlock were, despite the interesting dynamic he created.

Meeting up at an AA meeting Sherlock confesses to Joan that he doesn’t feel good about what they’re doing. He knows that they need to find this man’s identity but he feels like he’s betraying the entirety of the moral code of these meetings—especially after experiencing the luxury of its privacy himself. Joan tells him not to think of it that way but to think of it as a means to saving a life.

While he has her attention he tells her that he knows she’s trying to help Lestrade and that she shouldn’t be wasting her time. She should allow him to bottom out so that he can finally begin to rebuild—it happened to him and look at how he’s doing now? However, allowing someone to hit rock bottom when there are other options isn’t in Joan’s nature.

They don’t have to search for long in the meeting because an unexpected guest arrives: Sarah, the missing woman, herself but with a face that’s seen some plastic surgery to hide her identity.

Joan and Sherlock get her alone to question her about where she has been and she tells them that everything her ex-husband had said was true. They would get into horrible fights and she was afraid that one of them would go too far so one day she just left. She changed her name, her face, sobered up and got remarried and tried to get on with her life. They ask her how the ears could have possibly matched her DNA and she says that the DNA that the police compared it to wasn’t hers but a mistress of Gordon’s.

He confirms that he did in fact have a mistress but he lost touch with her immediately after the disappearance of his wife. After some digging, they find that his mistress died in a car accident three years ago—ruling her out of being the kidnapped woman.

Gordon tells the police that he’s always been honest with them and when he told them that he had spoken to Sarah on the phone years ago while believing she was kidnapped that he was telling the truth. He believes that she’s in on it too and Sherlock also believes that’s a possibility.

Lestrade in the meantime has worked out the cases Joan had given him and finds them to be too simple and after finding a rooster feather at the suspect’s house he believes he’s been played by Sherlock.

Here’s where the episode gets weird. Sherlock deduces that Sarah was the one behind the getting the ransom money from Gordon and staged her own kidnapping.

And the ears? She grew them on her back with the help of her husband who has had field practice with the type of DNA molding before.

Aside from being incredibly gross it’s also an absurd twist in a story that didn’t need it. I don’t mind outlandish storylines—most of my favorite television shows surround themselves in fantastical and escapist motifs—and I don’t mind needing to suspend my disbelief, it is a television show after all. What I have trouble with is using these type of over-the-top twists in order to construct an unnatural solution to the episode’s weekly case work.

It didn’t fit with the theme of the episode and seemed wildly out of place.

So Sarah is arrested and Joan and Sherlock head back home. Another case finished, another week of Elementary where the casework is dull and the character moments more than make up for it.

Lestrade calls Joan and Sherlock into the same room to have it out with Sherlock. He tells him that he knows he set up the entire mugging case for him and that in the end it worked because he will be leaving. He says that he’s taken a job with the Irish National Police because of how annoyed he was with Sherlock spoon feeding him the case instead of believing he could solve it himself. He said it was all too easy because Sherlock laid out all of the pieces—pointing him in all of the directions, faking witnesses, all of it. And then he found one of his pet roosters feathers at the apartment with all of the evidence laid out and figured it all out.

Sherlock owns up to it, wishes him the best of luck and then leaves the room.

After Lestrade has made his demonstration and Sherlock has left the room, he confronts Joan and tells her not to feel bad about Sherlock having left her in the dark. He believes that Sherlock had tried to pull the wool over not just his eyes but Joan’s as well. He had already made mention in his rant that Sherlock likely knows more about Joan that she’d care to admit and that he will use it to his advantage but, Lestrade tells her, it’s understandable because they’re still in the infancy of their partnership. Soon she will realize that there’s an expiration date on the life she has built.

He takes his exit.

Joan walks into the kitchen and asks Sherlock why he would do it and he tells her that he didn’t. The case may have been foolishly easy but it was in all honesty cracked by Lestrade and him alone. The feather fell from his pocket. Sherlock only conceded to Lestrade’s accusations because after listening to him talk he believed it would be what would help his old friend the best.

I was fearful for a moment after Lestrade’s message to Joan that it may spur her into being more dubious of where she and Sherlock stand in the long run but she’s stronger than Lestrade is and was. Joan throughout their partnership has found a way to walk alongside Sherlock while Lestrade has always been content to linger in his shadow. Joan and Sherlock have a partnership, a relationship that is durable. It had a weak start but they rebuilt themselves on solid ground and into something that can’t be torn down by a few off-color words from a jilted ex-partner.

Joan watches as Sherlock fiddles with another explosive that he’s been sent by his friend to try and solve, exercising his mind. Joan asks what will happen this time if the clock reaches zero and he says explode—he asked for a real challenge this time. He acknowledges that she hasn’t left the room and asks her if she’s staying. She says she has faith.

It’s an off-the-cuff remark that she hardly draws attention to but Sherlock catches the poignancy and so do we audience members who have just seen the encounter that took place between her and Lestrade. It also is obviously a double entendre for their partnership—making it all the more touching of a scene and one that could have possibly been written with a touch more subtlety. Sherlock now listens, aptly, to Joan’s advice. Him reaching out to help Lestrade at the end is demonstrative of that and is something he may have never done had Joan not been there to help focus him. And Joan, despite the inconclusive nature of who she’s working with, can’t help but want to stick around because no matter Sherlock’s past and who he has worked with and left behind, she can’t help but trust in her abilities, her necessity to her partner, and how strong they are as a duo.

Was it a perfect episode? No, but it didn’t need to be. It was made of strong material and had a reminder that our sleuthing duo are here to stay.