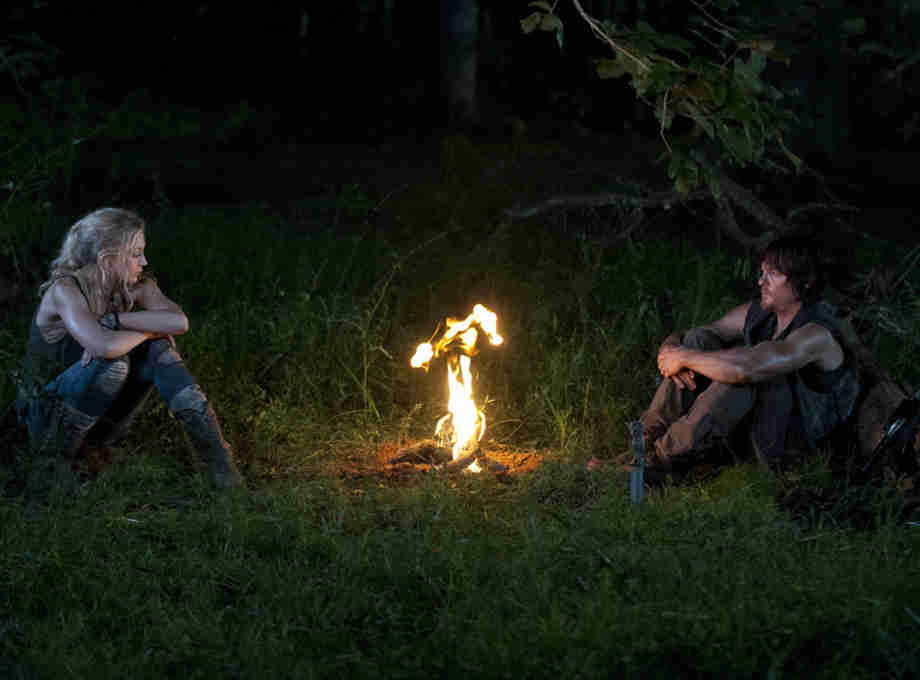 This episode is one that’s practically guaranteed to split fans’ reactions in half. It’s a slow, character-driven episode that contributes little to the overall story arc for the season. People are either going to loathe it or love it.

I’m going to go ahead and guess I’m in the minority of fans here when I say I really enjoyed this episode. It wasn’t perfect by any means, but I’m such a sucker for character-focused episodes (and an even bigger sucker for episodes where Daryl shows actual emotional responses).

The cold open is another Walking Dead favorite trope, the silent-but-for-the-moans-of-walkers kind. In fact, Beth and Daryl don’t speak to each other for almost seven whole minutes of screen time. The silence adds a level of tension to the opening where they wordlessly agree to hide in a car trunk to avoid walkers in the middle of the night, and that tension evolves from a suspense tactic to a sign of a deeper issue between the two characters.

And that issue is that they’re an odd couple in pretty much every way. We have Beth, the young, optimistic one, and Daryl, the hardened survivalist who shuts himself off from his feelings. This episode plays up the contrast between them throughout the meager excuse for a plot, and it even shows in the lighting. Watch a few scenes again, particularly Daryl’s breakdown in the yard and their nighttime porch chat, and notice how Beth is always bathed in some kind of glow while Daryl is relegated to the shadows.

The inciting incident for tonight’s “plot” is that Beth is bored of camping and wants to have her first real alcoholic drink. She literally says as much when she announces to Daryl where she wants to go. At first she’s ready to abandon him to his sullen silence and his snake jerky (gross) and he’s ready to let her, but he ends up following her anyway as we all knew he would.

Their quest for booze brings them to a formerly hoity-toity country club. Considering all the dead bodies inside, I’m going to guess this place has seen much better days. It’s always interesting to me when the show chooses to bring the surviving characters through a place where others haven’t made it. There’s no explanation for what happened to them or why, just more people who used to be alive. This camp seemed particularly large, so whatever went down must have been bad. Are more people getting that zombie flu? It makes sense that we’ll never know, because how would Beth and Daryl figure out what happened here, but it does make me wish for a series of loosely connected vignettes of other surviving groups just to see how other people are making out post-apocalypse.

Beth’s first alcoholic find is in the ransacked kitchen, but within about two seconds she has to break the bottle of wine to fend off a walker. She does pretty well for herself, braining it before Daryl even has the chance to make it over there, and I love that she’s been able to progress this far. Season two Beth wouldn’t have been able to defend herself against anything, but now she could almost make it completely on her own.

Notable finds from their exploration of the club include Beth’s new Washington D.C. spoon (the only tie-in to Glenn and Tara’s storyline to be found), a new shirt for Beth, the wads of cash and jewelry Daryl can’t help but take despite their lack of value in this new world, and of course the “Rich Bitch” corpse/mannequin combo that will haunt my nightmares for at least a week.

Throughout this whole process, Daryl is on edge and clearly uncomfortable in this environment. Understandably so – can you imagine Daryl pre-turn strolling into the Pine Vista Country Club? I don’t think leather jackets are part of their dress code. He takes this discomfort at the reminder of who he used to be, and his anger at what happened at the prison, out on the walkers who follow them into the bar.

Beth manages to find one bottle left amidst the wreckage of the lounge, and it’s peach schnapps. She contemplates having her first drink while Daryl plays darts with the portraits of notable club members. She has a quiet and contained mini-breakdown right there at the bar, and Daryl decides her first drink isn’t going to be “no damn peach schnapps.” It may have been a silly quest, as Beth admits, but Daryl’s still himself enough to want to make it a good one for her.

He takes her to a place he and Michonne had found before, a run-down little house in the woods with a shed full of moonshine. It’s a better first drink than peach schnapps, but barely. He even pours it out of the mason jar into a glass for Beth, which is a sweet gesture. She’s worried because Hershel once said bad moonshine would make you go blind, but she gets over her hesitation pretty quickly.

At first Daryl refuses to partake in the moonshine because somebody has to keep watch (an excellent point), but he gives in when they decide to wait out the walker outside. Hanging out drinking moonshine in an actual living room sure beats waiting out walkers inside the trunk of a car.

Beth talks Daryl into playing “Never Have I Ever,” in a super not subtle attempt to find out more about his life before the turn. She had guessed motorcycle gang member earlier, but that, like the Detective Dixon theory before it, was untrue. We manage to learn that Daryl’s never left Georgia and never been on a vacation. When Beth offers up that she’s never been in jail (as a prisoner, that is), Daryl instantly freezes and you can practically see the anger switch click on in his head. “Is that what you think of me?” he asks quietly, dangerously. Beth says she just meant even the drunk tank, Hershel had landed in there before, but it’s too late, Daryl’s drunk and offended.

Daryl’s been out of the spotlight lately, and it almost made me forget what a fantastic job Norman Reedus does playing him. Here, Daryl’s in a rage, and he’s lashing out at Beth, and I’m the most scared I’ve been all episode. He’s suddenly unpredictable and violent, and he heads outside, itching for a fight with the walker. He uses it as target practice as he aggressively tries to get Beth to shoot his crossbow (her first “never have I”), but she puts an end to it all by stabbing the walker in the brain. Like her father before her, she still thinks the dead deserve some kind of respect.

Their tensions finally boil over here in the yard. With all the yelling they do, I’m surprised more walkers don’t show up, but if they had, we would have missed out on another wonderfully acted Daryl breakdown. Emily Kinney holds her own here, tapping into that strength we’ve started to see from Beth to call Daryl on his tantrum. She’s managed to survive despite not being like him or Michonne or Maggie, and he’s got to deal with that. That’s why I love exploring how these two survive together, they are such vastly different people. Beth did the “soft” things like taking care of Judith and keeping things running smoothly at camp while other people (like Daryl) went out on the runs. Daryl was the muscle, the strong silent type always ready with his crossbow. They have to learn to adapt to each other to keep each other alive out here, and I for one am interested to see where they end up going.

Daryl starts to get at the real reasons he’s so angry: everyone might as well be dead because they’ll never see them again, and he feels responsible for that. It’s classic survivor’s guilt, thinking there’s something he could’ve done to prevent the Governor from taking their home apart or from killing Hershel. His guilt and anger dissolve into much more convincing tears than I’ve ever seen from, say, Rick, and Beth simply hugs him from behind as he lets it out.

They end up sitting on the porch together in the evening, and Daryl owns up to being a jerk when he drinks, which I guess is kind of an apology for how he treated Beth. They bond over being younger siblings, and Daryl finally tells us what he was doing before the turn. The big, anticlimactic answer is that he was simply drifting around with Merle, getting drunk and high all the time and doing whatever his brother told him to do. He was, in his own words, just a “redneck asshole.” Did we really expect anything different? Following Merle around was how we found him in season one after all, no reason to think he hadn’t been doing it already.

Beth gets to the reflective stage of her drinking, and reminds Daryl that she’ll be gone someday too. He looks pained at the reminder and starts to deny it but Beth insists that he’s going to be the last man standing. It would suck to kill off Beth after she and Daryl have gone through so much together, and that’s why I’m worried the writers might actually do it.

We’ll have to wait and see though, because this episode ends with a cathartic burning of the house, a destruction of all the bad parts of Daryl’s past that will let him move on to the future. At Beth’s suggestion, they splash the house with all the moonshine and use a wad of country club cash to start the fire. She convinces Daryl to wordlessly flip off the house with her, which is super corny but she’s only 18 so I’ll forgive her. The pair heads off into the woods with the fire raging behind them, walkers already drawn to the noise.

All I can think is that now they’ll have to fight a forest fire in addition to the zombies, but hey, they got their symbolic ending.

There were definitely parts of this episode that fell flat (like the entire premise for the plot), but the character focus was the big draw for me. Daryl’s character development is second only to Michonne and Carol’s character developments in terms of how much I’m interested in it, and it was good to see Beth step into a bigger role as well. Plus, who doesn’t love a good post-apocalyptic drinking game?