Hollywood’s famous heartbreaker may be single once again.

John Mayer, a crooner known for his long list of girlfriends, and singer Katy Perry have reportedly broken up, according to E! News. A source “close to the pair” told E! that Katy was the one who called it quits in the relationship.

The news may seem odd, considering Perry recently sparked engagement rumors when she wore a large diamond ring on her left hand at the Elle Style Awards on Feb. 18 (although she isn’t new to stirring up rumors by wearing a ring on that finger.) A source told E! back in November that an engagement would be “inevitable” and that friends and family wouldn’t be surprised if he proposed, since “everyone wants them to get engaged.”

The pair collaborated on the song “Who You Love” off Mayer’s latest album, Paradise Valley, which was released last August. The music video, starring Mayer and Perry among a variety of real-life couples, premiered Dec. 17 on Good Morning America.

This isn’t the first time the couple has broken up. The couple has been on-and-off since 2012, with two breakups in August 2012 and March 2013, but once they got back together in June 2013, their relationship appeared to be going strong, at least according to several media outlets.  (Here’s a timeline of their relationship to make things a bit easier to follow.)   I guess the third time was not the charm with these two? 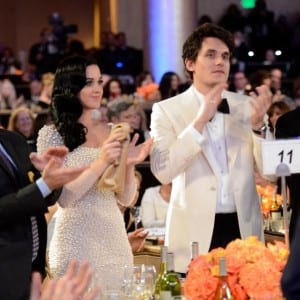 While the reason for the reported split hasn’t emerged yet, E! News mentioned that “Mayer was noticeably absent from Perry’s side on her recent trip to London and Milan.”

Mayer and Perry are still following each other on Twitter and there is no indication (on Twitter at least) that the rumor is true quite yet. Has one of Hollywood’s hottest couples truly ended their relationship or will they reconcile once again?