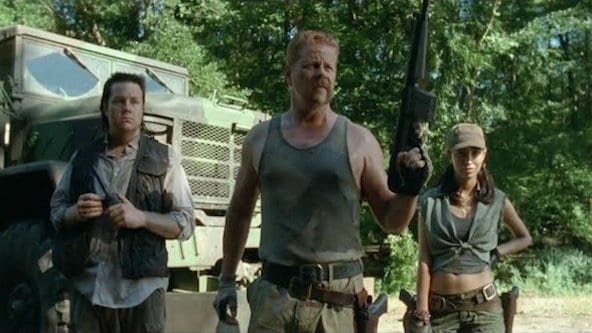 When The Walking Dead goes full-on fascinating character mode, they really bring their A-game. I was not expecting to get more Michonne focus so soon after her backstory reveal in the midseason premiere, but thankfully one of the stronger arcs in “Claimed” follows her and Carl bonding as they scavenge for supplies.

Their morning starts out like any other post-apocalyptic suburban morning, with milk-less cereal in the house’s abandoned dining room, and Michonne and Carl actually laugh together. It was so strange – in a good way—to see genuine smiles and enjoyment from the two of them. Naturally, it was all quickly shot down by a mention of Judith, but for just a minute they both had a piece of pre-zombie normalcy.

Rick felt it too, even from the kitchen, and he thanks Michonne for making Carl laugh again. He wants to join them on their supply run, but considering his comatose state less than 24 hours prior, it makes the most sense for him to stay behind.

Carl and Michonne have moderate success on their run (amazing success, if you’re as big a fan of Crazy Cheese as Michonne), but their cool aunt/sullen teenager bonding doesn’t really take off until Michonne decides to share that she used to have a three year old son with him. Carl, fascinated and totally suckered into Michonne’s Mary Poppins-esque game of do your job to get the answers you want, wants to know everything he can about her past.

What we end up finding out is that her son’s name was Andre Anthony, and that he was her only kid. I’m sad that she doesn’t get more specific in answering Carl’s “when” question about losing Andre, but it’s also totally understandable. She’s accepted the loss of her son, but she clearly hasn’t moved on from the entire situation surrounding that loss. It won’t be until she comes to terms with whatever went down with her old group that we’ll get the final pieces of her puzzle, and I have a feeling that won’t be for a while yet.

The creepiest thing about the house they’re raiding ends up hiding in a little girl’s room. After unwrapping the final painting (a zombified portrait), Michonne finds the house’s former family all dead together in a garishly pink and horrifically innocent bedroom. It was a murder-suicide situation, and she spares Carl from having to see it, knowing how much he’s hurting about Judith.

Watching them interact with each other is almost endearing, and a refreshing change from all the father/son angst that’s been going on between Carl and Rick. Plus, Michonne is totally rocking her new Han Solo-esque look, and I’m always down to watch her look extra badass doing basically anything.

In this week’s weakest arc, Rick finds himself in an unexpected, actually violent version of Home Alone: he falls asleep reading the short stories of Jack London and wakes up to a roving gang of survivors taking over the house.

He manages to hide himself under the bed and lays there on edge, trying to figure out what he can use as a weapon and hoping the guy who comes in the room doesn’t look under the bed. Of course the guy doesn’t, which begs the question of how they’ve been able to survive this long roaming on their own if they don’t even sweep a room properly.

But that’s not the right question. These guys are a passing threat, and while I think there’s a chance they’ll show up again as a surprise twist or something, this arc is just about Rick getting out. It’s supposed to be very tense, very edge-of-your-seat, but the reason I called this arc the weakest of the episode is that all that tension falls flat.

It’s all so obviously contrived, and while the shots have great detail (getting a good look at the first guy’s bloody boots as he walks too close to Rick, for example) and the actors do what they need to do, it just ends up feeling like every other thriller I’ve seen.

I’ll admit, the one part that actually took me by surprise was Rick killing that guy in the bathroom. It makes perfect sense for him to do it- and to leave that bathroom door open for after he turns – but I didn’t expect to see Rick kill a human again so soon after the prison fiasco.

Killing is part of surviving in their world though, and Rick making the decision in his head to take out Canned Fruit Guy on the porch to save Carl and Michonne from running into these people was well acted by Andrew Lincoln. You can practically pinpoint the exact second Rick decides he’ll kill this guy too, if he has to, but thankfully the surprise new walker upstairs served to draw Canned Fruit Guy back in and allow the trio to escape.

The third storyline of the episode is all about Glenn and Tara’s interactions with Sergeant Abraham and his crew. They seem to be on a drive to nowhere, but Tara’s made the brilliant decision to write down landmarks on her hand with a miracle marker of unknown origin. I know sometimes I use brilliant sarcastically, but I really mean it, I feel like going through the whole debacle with the Governor ended up sharpening her survival skills. She doesn’t know who these people are or where they’re taking them, and she’s not about to let them make her helpless again.

All she knows is they have a truck, they have some kind of plan, and that Abraham smiles like a kid on Christmas when he kills zombies. Not the greatest indicators of trustworthy company, that’s for sure.

And that’s not a knock on Abraham, far from it; he’s one of the more interesting characters they’ve introduced in a while. I don’t know how his show arc will differ from his comic arc, but even ignoring the comic story, he’s already a complex character just two episodes in. Here’s a man used to having authority who knows how to handle himself around walkers who’s chosen to hang his hat on a save the world mission that he knows none of the details about.

This is the first time since the CDC arc that anyone has tried to get to the bottom of anything surrounding this zombie outbreak. Now we have Eugene, a scientist who knows what happened, trying to make his way to Washington with the help of Abraham and Rosita.

When Abraham tries to convince Glenn to stay with them instead of looking for Maggie, he plays the “save humanity” card in telling him about their mission. They’re one of the first roaming groups we’ve seen since the beginning with a real sense of purpose and a goal ahead of them beyond the basic food, shelter, and main character reunion that drives the others. I’m interested to see how their interests will play out with and against Glenn and Tara’s.

We’ve already seen Eugene be totally incompetent with a weapon, so conflict situations involving him will likely get hairy. I wonder if Abraham would be willing to give up his own life for this mission and this scientist he has dedicated himself to?

Glenn predictably insists on leaving them behind to find his wife and Tara instantly follows him after they help dispatch a swarm of walkers that came up when he and Abraham’s verbal scuffle turned physical. In the end, Eugene tells Abraham that it’ll be best to go with Glenn for now and stick together in hopes of finding a new vehicle than to risk new territory on foot. He’s super cocky about his decision, telling Abraham that since he’s a scientist he’s smarter than him.

Personally, I can’t wait for the day somebody punches Eugene in the face like Glenn did Abraham. His attitude and shifty eyes are just kind of asking for it.

My bet is that with Rick, Michonne, and Carl finding a sign directing them to Terminus and deciding to check it out that everyone will end up there sooner or later. We already know Carol, Tyreese and the girls are on their way there now, and chances are good that at least one of the remaining groups (Glenn’s, Maggie’s, or Daryl and Beth) will find their way to those railroad tracks too.

It looks like next week Beth and Daryl might be in some serious walker danger, so I guess we’ll have to see if they even survive long enough to find out about the mysterious Terminus.