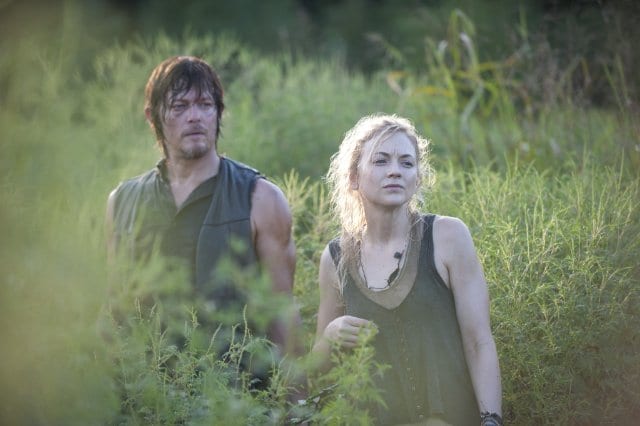 Daryl (Norman Reedus) and Beth (Emily Kinney) are the first survivors we catch up with in “Inmates.”

Even though the midseason premiere last week was great and all, it was so exciting to catch up with the rest of the scattered prison crew. So far, everyone’s alive, which is the good news. The other good news is that Carol is back (I know she kind of committed murder and everything, but she’s still one of my favorites – there’s something I hope I never say about a real life person).

The bad news is that the outlook is still pretty bleak for most of the group. The first people we see are Daryl and Beth, running through the woods and killing walkers in silent synchronization as Beth’s old journal entry serves as a voiceover. Past Beth is talking about the first day she unpacked in the prison, inspired by a chat with Hershel about hope. And guess what becomes a theme of the episode? If you said hope and/or faith, ten internet points for you!

Beth and Daryl are two of the quietest characters on the show, and they spend most of their time in silence, except for when Beth is yelling at Daryl about believing that the others are alive. She ends up convincing him to help her track them down, and they find some footprints from about four or five hours prior. The prints lead to a scene of a struggle and finally to a set of railroad tracks where walkers are feasting on a few dead bodies.

I don’t know if I like Beth and Daryl together. They watch out for each other, but they’re both more interesting to watch when they interact with multiple characters. I’m assuming most of the group will end up back together, so hopefully that includes these two so things will be a little less awkward between them.

The coolest bit of the episode, pacing-wise, is that the tracks Daryl and Beth are following turn out to belong to Lizzie, Mika, Tyreese and Judith. I was so happy to see Judith alive! I figured walkers couldn’t open car seat buckles and that the girls’ first instinct would be to find the baby, but I still audibly sighed with relief when she came into frame.

They’re probably the group with the biggest obstacles to overcome, considering all they have for defense is Tyreese and they’re dealing with a crying baby all the time. Tyreese is such a good father figure though. Was anyone else surprised? It’s not that I actively thought he’d be a bad dad, I just never thought of him as particularly paternal. But he’s really good with the girls, and he’s doing his best to keep them safe despite his obvious worry about his sister.

What we really need to talk about – besides the utter stupidity of leaving the girls alone with the baby in the middle of the woods to chase after screaming people – is Lizzie. Cold, calculating, possibly-hearing-voices, definitely-murdering-small-animals, Lizzie. How fucked up was her silencing Judith almost to the point of murdering her??

No, really. Out of all four seasons of this show, I’d say that may be my top most disturbing moment so far. I can only hope that nothing gets more messed up than this, but knowing the writers (and having read a lot of the comics), it’s pretty likely something will overtake this moment soon.

If there was any doubt left that she was the one behind the creepy rat dissections and the walker feedings at the prison, I’d say it’s gone now. Good thing Carol showed up when she did, because one or all of those little girls was about to die at the hands of walkers – or in Judith’s case, Lizzie’s hands – and Tyreese was running into walker trouble of his own down by the railroad tracks.

It’s too bad those two guys had to succumb to death by walkers, because after all that time in the prison it’ll be good to get new blood in the group. The man bitten in his neck manages to tell them about a sanctuary up the tracks where the kids can be safe before he’s left to his fate, and that’s where Carol and Tyreese take the girls.

There’s a map with a town called Terminus marked off, complete with a cryptic message: “Sanctuary for all, community for all, those who arrive survive” message. Any guesses as to what they’re going to find when they get there?

Personally, I’m excited for Tyreese to find out about what Carol did. She deliberately skirts the whole exiled-by-Rick issue when he asks how she got out of the prison, and the truth is bound to come out somehow. I’m not excited for Tyreese to get angry at her, of course; I’m just stoked about all the tension this brings to their partnership.

In another part of the woods, Maggie, Sasha, and Bob are doing okay for themselves. Sasha is all about setting up camp and finding food, but Maggie only has Glenn on her mind and nothing’s going to stop her finding him. Bob supports her, and Sasha reluctantly tags along because of the whole safety in numbers policy. Clearly she’d like to look for Tyreese, but she’s too cynical to let herself believe in finding him.

They do end up finding the bus, which is standing stock still in the middle of the road. Bob and Sasha immediately recognize this as a terrible sign and want to hang back, but Maggie runs right for it, determined to find her husband. Naturally, the bus is full of walkers because they loaded it up with the weak and infirm—someone was bound to turn.

Maggie, bless her, is brave enough to look all the walkers in the face to see if any of them is Glenn. In a scene reminiscent of the execution of Hershel’s barnload of walkers back in season two, Sasha and Bob let the walkers out of the back door one by one for Maggie to take care of. Predictably, they pile up and spill out all at once, but none of them turn out to be Glenn, which is the good news.

The bad news for our favorite post-apocalyptic newlyweds is that Glenn is back at the prison. He got off the bus at some point, presumably to find Maggie, which kept him alive but trapped. He wanders through the dark prison as hordes of zombies assemble outside, and allows himself a nearly silent breakdown at the sight of Maggie’s picture.

He pulls himself together and packs a bag, complete with Hershel’s pocketwatch (ugh, my heart), and tosses on his old riot gear suit, prepared to make a solo break for it. He ends up finding Tara, secluded in a cage of her own making out in the yard. She’s safe but in a state of utter shock. He convinces her to come with him, and they make a break for it after Glenn sets fire to a car to distract all the walkers.

It’s the second time we leave the prison as smoke billows through the air, and I don’t think we’ll be coming back this time.

Tara’s overwhelmed by the death of her sister, the Governor’s betrayal, and Hershel’s death. It wasn’t until Glenn froze in place at the mention of an old man’s murder that I remembered he didn’t know about Hershel. Will that death ever stop being sad? Probably never.

Glenn pushes onward in his quest to find Maggie, because Hershel always told him to believe. It’s nice to see the people Hershel had the most impact on—his daughters and his son-in-law—echoing his teachings throughout this episode.

He’s still in bad shape after his bout with the walker flu, and Tara has to help him fend off a few walkers on the road. The trademark episode-ending plot twist comes in these last few seconds, as she spits sarcasm at the newcomers in their army truck. And guess who it is? Abraham Ford and friends! (Don’t worry, non-comic friends, you’ll get to know them soon enough.)

As important as it was to see everybody’s journey from the prison to where they end up by the end of “Inmates,” it’s just as important that we’ve got a solid setup going for the rest of the season. Carol and Tyreese are on their way to an intriguing new community, we’ve got new comic-based characters to get to know, and of course the exciting possibility of a prison family reunion is always on the horizon.