Screened at Sundance and available now on DVD, “Linsanity” chronicles Jeremy Lin’s improbable journey to the NBA.  While Lin’s historic run with the New York Knicks will be familiar to many viewers, much of the film covers Lin’s childhood, his high school and college careers, and his struggles to realize his dream of playing in the NBA. 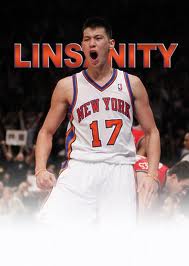 Lin’s father was a basketball fan and passed on his passion for the game to his three sons.  Growing up in Palo Alto, in Northern California, Lin is shown at a young age preferring basketball to playing the piano and is eventually encouraged by his parents to focus on playing basketball full-time.

The filmmakers utilize footage of Lin on the basketball court as a youngster competing on various teams throughout his youth.  Lin’s high school and college coaches are interviewed and provide insight into Lin’s basketball prowess.  Lin excels in high school and eventually leads his team to the State Championship.  Despite putting up impressive statistics and showcasing incredible talent, Lin is unable to fulfill his dream of playing for Stanford, UCLA, or other PAC-10 schools.  Lin is not offered an athletic scholarship from any Division I program and ends up playing in the Ivy League at Harvard.

Coached by former Duke basketball player Tommy Amaker (who also coached at Michigan and Seton Hall), Lin continues to flourish at Harvard.  Amaker describes Lin as “aggressive” and “fearless” and states that “the bigger the game, the better he played.”  Not surprisingly, Lin excels at Harvard and against Big East powerhouse UCONN. Lin plays one of the best games of his college career scoring 30 points against the Huskies and people begin to take note.

From childhood through the start of his NBA career, Lin was routinely underappreciated and underestimated by opponents on the court.  As an Asian American, Lin constantly faced prejudice and had to overcome tremendous adversity to succeed.  In the film, Lin expresses sadness and disbelief that even while playing for Harvard in the hallowed Ivy League, opposing fans would yell and taunt him with anti-Asian slurs.  Sadly, it was not the first or last time that Lin would face such indignities while playing games on the road in opposing arenas.

Despite going undrafted in the 2010 NBA draft, Lin ends up playing with the Dallas Mavericks’ Summer League team.  He competes against number one pick John Wall and holds his own, but ultimately is released before signing with the Golden State Warriors.  Despite being a hometown favorite in Northern California, Lin plays in a limited capacity for the Warriors before being released and signing with the Houston Rockets.  After a short stint with the Rockets, Lin is cut again and signs with the Knicks.

Lin’s fairy tale with the Knicks is the most improbable of all.  We are reminded of how inconceivable Lin’s success with the Knicks truly was, beginning with the fact that Lin was sleeping on his brother’s couch in Manhattan at the time of his newfound success.  He also slept on teammate Landry Field’s small, rental couch before the February 4, 2012, game against the Nets, in which, Lin was fighting to keep his spot on the Knicks’ roster.  This game marked the beginning of “Linsanity” and changed Lin’s life forever.

The filmmakers artfully take us through the game-by-game highlights of the phenomenon that became known as “Linsanity.”  Lin’s outrageous play against the Nets, Raptors, and Lakers is highlighted.  The film also uses newspaper headlines and television and radio play-by-play and commentary to take the viewer back to Lin’s out of nowhere ascendance from benchwarmer to bona fide NBA star.

The film does not touch on Lin’s free agency other than to note that he signed a three-year deal with the Houston Rockets.  It does not delve into whether Lin was hurt by the Knicks failing to resign him to a new contract or whether other forces were in play that sought to exile Lin from the Knicks’ roster.  The movie also does not cover Lin’s continued success with the Rockets and their exciting, young roster.

In the movie, Lin comes across as an articulate, funny, affable, spiritual and family oriented individual.  Interviews with his parents and brothers provide the viewer with an understanding of how Lin came to be the humble and charming young man that he is today.  Lin’s younger brother, Joseph, is currently a guard on the Hamilton College Men’s Basketball team in Clinton, New York.  Lin is featured in the film attending his brother’s game at Hamilton and cheering on his brother like any other sibling would.

“Linsanity” captures not only Jeremy Lin’s incredible few months with the Knicks, but also his unique background as an Asian American basketball player, the trials and tribulations that he faced trying to make it to the NBA, and his inspiring life story.