Let’s Go to the Mall

Fair warning, this review is full of spoilers for The Last of Us, the American Dreams comic and the Left Behind DLC

It would be easy to not care about  the characters and events of Left Behind, the first DLC for Naughty Dog’s fantastic 2013 release The Last of Us (reviewed here). This two-hour adventure adventure takes place before the events of The Last of Us even begin to pick up steam and the fates of these characters is already well known. You’ve already cried these tears and you’ve already seen where it’s all going. Still, Naughty Dog manages to tug at a multitude of emotions, crafting a touching story of friendship, hope and despair. Left Behind may not add much mechanically to The Last of Us formula, but it does expand on the universe better than most DLCs even try to be.

While the original game focused on creating a lasting and believable relationship between Ellie and Joel, Left Behind focuses on Ellie’s life before the cross-country trek. Dejected from her stay at a military school, Ellie is surprised when her missing friend Riley suddenly shows up and they’re off on an adventure through an infected filled city. Naughty Dog’s talent for writing believable and smart characters is on full display here, as we’re witnessing two characters not at the beginning of their journey, but in the beginning, and it’s extremely believable. One of the highlights of The Last of Us was the interaction between Joel and Ellie, and the small-talk between them. In Left Behind we’re treated to much of the same, but there’s something almost naively charming about the conversations the two have; and the conclusions they come to about the world around them are surprisingly deep.

It’s perhaps most fitting that much of Left Behind takes place in a shopping mall, as there’s almost no more normal place for two teenage girls to go. It illustrates a very touching point — this world, as crazy as it is is the new normal for these two girls. It’s a great callback to the Last of Us, and one illustrated quite well in the American Dreams comic (for the record, you can play Left Behind without reading American Dreams, but you’ll get so much more out of it if you do). The endgame of Left Behind is a stunning finale that’s built towards the entire experience and tugs at the heart strings much like some of the most emotional moments of the original game.  I don’t want to spoil anything but there’s a moment here that rivals the giraffe moment in The Last of Us proper. 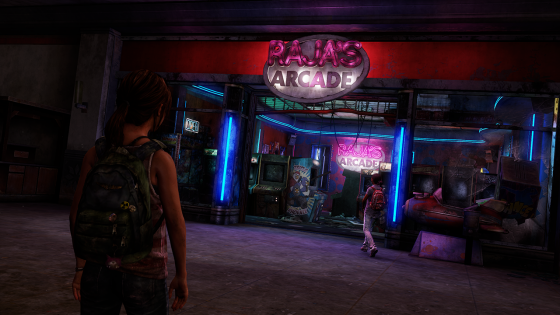 Combat wise, Left Behind borrows much of its structure from the original game, but since you’ll be playing as the inexperienced and naive Ellie instead of the combat worn Joel, combat takes a much different turn here. You’re rarely going to be entered into the knock-down, drag out fights of the original game — instead combat is often small and intimate and features Ellie and Riley against a small group of human thugs or infected. The game encourages you to think before you go into battle even more than before. You’ll need every advantage you can here, and listening to conversations and allowing events to unfold before jumping in is essential to your survival. It’s all frustrating like the original game’s combat can be, but less so since the scale is o much smaller.

Left Behind doesn’t fix the few things that were wrong with The Last of Us, but then again it doesn’t really try to. It is however a remarkably well written, paced and crafted tale that allows fans of the series to delve deeper into the world of Naughty Dog’s apocalyptic masterpiece. Fans of the original game will love it, and it even serves as a wonderful jumping on point for those who are just now experiencing it. Simply put, if you liked The Last of Us (and let’s be honest…who didn’t?) you’ll feel right at home with Left Behind.