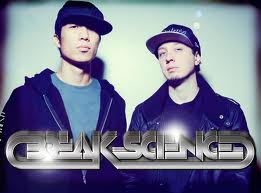 You may not be too familiar with the names Adam Deitch and Borahm Lee, but these two musicians have put their stamp all over the music scene for the past 20 years. Deitch has worked with artists from 50 Cent to Matisyahu to Pretty Lights in drumming and producing, while Lee has worked as a keyboardist, producer, and sound designer with acts such as Wu-Tang Clan, Wyclef Jean, and Lauryn Hill. Both musicians were born and raised in New York City and have now joined forces to form the duo Break Science.

Break Science is not your average EDM act, as both Deitch and Lee play instruments, Deitch on drums and Lee on keyboard, during their show— a refreshing alternative to a mixing board and lap top. I was lucky enough to catch up with the duo before their Boston show to talk about their debut album Seven Bridges, the evolvement of EDM, and their plans for the future.

Blast Magazine: Both of you guys have been in the music industry for quite some time, working with a variety of artists in a variety of genres. So, how did the two of you meet?

Deitch: We just met through a mutual friend and he introduced us and we have been working together ever since.

Blast: How has it been working on the Pretty Lights Label and putting out your first full-length album?

Deitch: It’s great. The Pretty Lights Label has been very helpful, very cool to us. We are from New York and it’s a label based in Colorado, so they have embraced us New Yorkers. And kind of help us understand the scene from a Colorado perspective, which is, you know, a really burgeoning scene over there. The electronic hip-hop soul hybrid is really blowing up out of that place and has really blown up out of that place. Now it’s nationwide and it’s about to be worldwide, but, you know, that brand of electronic, that hip-hop, is really Colorado based and the Pretty Lights Label has been at the forefront of that for quite some time since its inception. So, we are excited to be with them.

Lee: It’s our third release actually, but it’s our first full-length record. We definitely got the full support of Derek and the whole label more than ever behind this last record, so it has been greatly received I guess.

Blast: As you were saying, EDM has recently come into the mainstream in the past few years and a lot of artists in a similar vein can be put under this umbrella of “EDM” and appear undifferentiated to a casual listener. What would you say sets you apart from other artists? How would you advertise your unique style?

Lee: I know that there is a general umbrella, but really it is one of the kinds of music that has the most subgenres in all of music. You know, you have this broad statement of electronic music, but within that there are so many things that fit in across the board. We don’t have a specific one word genre, but some people call our music, you know, bass music or like hip-hop/electro music, you know, glitch-hop. I like saying electro/hip-hop bass music.

Deitch: We just feel like, our thing growing up in New York, we just paid a little bit more attention to the kind of hip-hop that was local to New York, like the more underground. I wasn’t even into West Coast, you know, Snoop, I was so into New York KRS1, Ra-Kim, Diamond D, and kind of old school Tribe Called Quest, De La Soul, and Genmin Brothers, so those things kind of seep out in our music. I don’t if it’s subliminally or not, but I guess that is what sets us apart. The fact that we grew up with that music and also that we grew up playing instruments and liking everything from reggae and afro-beat to funk and soul and classical music. We have a large palette to draw from.

Blast: That kind of leads me to my next question regarding that fact that you chose to collaborate with a lot of artists to include lyrics on your tracks on Seven Bridges. Where does that decision come from? Do you feel the tracks sound better this way or that it adds something to the music?

Lee: Most definitely! All the artists that we did work with we are close with them and had developed musical relationships with them over the years, so it’s not just any old person, you know, it’s someone who we feel will help us communicate what we feel and get where we are coming from. Even though we are instrumentalists, drummer and keyboard player, and not singers per say, we know the power of the voice and how people understand it and it brings people together, you know, how powerful of a form of expression it is.

Deitch: We are blessed to work with Sonia Kitchell, who is a Grammy winner. She was on tour with Herby Hancock, the jazz legend, and she actually lives in my neighborhood, Brooklyn, and ended up doing two songs on our record and she is such a brilliant singer. She did “Breathe of Space” and, uh, what’s the other song?

Break Science’s Seven Bridges can be streamed on their Soundcloud account. Media credit to thecomeupshow.com

Lee: We just have so many names for every song. Oh, “Once And A While” is the other one. We also have Jahdan who is actually a legendary reggae vocalist and he is on Major Lazer’s stuff and, you know, people definitely know who he is as well.

Blast: You just embarked on this current tour, what are your plans for the live show? Can you speak a little to its production and your involvement in that and how important it is to you?

Deitch: Our live show is evolving everyday. I think musically we have been evolving the music so much we kind of put the visual side in the back seat for the past few years. Now we are developing our visual aspect of the show and it’s just really fun. It’s like we are working on it everyday with the guys we have on tour and it’s a great process going from doing music and deciding what works visually and what kind of messages and visuals we want, you know, from it being cityscapes to futuristic sort of abstract things and nature things. Today we are trying out something brand new which we have never done involving cameras so that you can see what me and Borahm and doing on our instruments as well as seeing the visuals of the show. So we are debuting that tonight and we are pretty excited about it.

Blast: You performed at many festivals this past summer such as Camp Bisco, Electric Forest, and Electric Zoo. Do you have any festival plans this summer?

Deitch: We sure do.

Lee: We are confirmed for Bonnaroo, that’s the big one. I think we are allowed to tell people now and we are really excited about that. We are doing Wakarusa and few others, um, Jazz Fest in New Orleans, and a bunch of others. We are really excited.

Deitch: Of course, our home is Florida Bear Creek.

Lee: Yeah, Bear Creek Festival is definitely going to be a highlight of the year.

Blast: Speaking of festivals and particularly EDM festivals, a lot of controversy has risen regarding the culture of EDM and specifically the “drug culture” with Ecstasy and  “molly.” In Boston alone there have been several deaths and several forced cancellations of shows because of the controversy. How do you feel about it and the opposition that has started to rise against the culture?

Deitch: I think people have to be extra careful. They do make tester kits, if you feel like you must do something that is powder related, you should check it out before you do it. There are a lot of people trying to make money out of cutting it and messing with it, so be as safe as possible and drink water. Eat something. If you are going to dance all day, even if you are sober, and you are not drinking water and you are not eating, you are going to pass out. The opportune thing for us is to send the message of just be healthy and drink a lot of water and eat some food.

Lee: Stay informed if you are going to try and experiment, like, do your research, you know? See what’s okay to take, like how much and how you have to drink water and how to test it. You know, do your research before you get in. It’s a little sensitive with EDM because, even though those things have happened since the inception of big festivals, EDM draws a younger crowd so people are more sensitive to it, as they should be. Kids just have to be really careful.

Blast: To end on a lighter note, what are your plans for the future? Have you started recording or playing around with music for a future album?

Lee: We just completed our first new track since Seven Bridges. We wrote it in Reno, Nevada. We were inspired by the desert and it came out really cool. And now we are just working on some new mixes. We did a remix for Pretty Lights for his Color Map of the Sun remix record and we are excited about that. So yea, we got a lot of things on our plates, it’s sort of never ending process with a lot of unfinished things from the last record we need to finish up and stuff we have to start from scratch and just start grinding again, put those hours in.