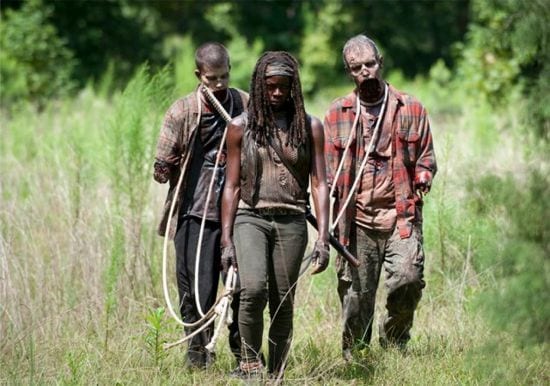 Michonne (Danai Gurira) sets out to find Rick and Carl in the aftermath of the Governor’s attack.

The Walking Dead is finally back, and while we don’t catch up with the whole cast of scattered survivors, we do get some sweet zombie-killing action, huge character moments for Carl, and my favorite thing of all, Michonne backstory!

I love that the cold open was so quiet. It let us absorb the aftermath of the battle for the prison along with Michonne and take in the wreckage as she was seeing it. They did show us the Governor dead on the field, though I’m a little surprised he hadn’t turned yet. For a second, I thought his eye was going to snap open as Michonne walked away, but thankfully he looks like he’s staying dead.

This sequence sets up Michonne’s arc for the rest of the episode. She reverts right back to who she was when we first met her way back when she saved Andrea from Hershel’s farm, shutting herself down and slipping into auto-kill mode on any walker who dares cross her path, even going so far as to make two new “pets” to use as camouflage. The worst part of the opening though was Hershel’s zombified head, gnawing away at nothing where it lay on the ground. Michonne’s mercy kill brought us right into the opening credits, and reminded us all how hard it’ll be without the group’s moral center around.

Rick and Carl are the only other two we see in this episode, which makes sense given they were the last two we saw fleeing the prison in the finale. Rick’s in bad shape after his fight with the Governor, and can barely keep up with Carl. Though to be fair, Carl’s not exactly making it easy for him either. The Grimes men are not big on talking about their feelings, so their shared grief and Carl’s anger create a palpable tension between the two of them that lasts all episode.

They end up finding a small shop and argue about who’s going to clear out any walkers that may be inside. Neither of them believe the other can handle it alone, though for different reasons; Rick because he still sees Carl as his little boy who needs protecting, and Carl because Rick is injured and in no fit state to fight off any walkers. There ends up only being one walker inside, and Carl and Rick have another argument after Carl wastes a bullet shooting it when Rick was trying to use an ax on it instead.

It’s hard to side with either of them in this episode just because they both are so incredibly thickheaded about different things. Yes, Carl should know better than to use a gun without it being absolutely necessary. But Rick should also know he’s badly injured and shouldn’t overexert himself. They end up finding food, though Carl insists that he won in terms of whose haul was better and suddenly he’s grown up enough to be entering contests of masculinity with his father.

That’s what Rick and Carl’s arc is really about this week (and will probably continue to be a theme throughout the back half of the season), the mutual struggle of maturity in a parent-child relationship. Every kid grows up eventually, and every parent has to learn to accept them as a fellow adult. It’s just that most kids don’t grow up during the zombie apocalypse.

And Carl has some terrific growth as a character with this storyline. He lashes out at his father out of anger and grief, directing insults at Rick meant to lure out walkers in their chosen safe house, even going so far as to throw Shane in his face. Did anyone else whisper “Oh, snap!” when Carl asked if Rick remembered Shane? No? Just me? Okay.

After successfully wounding Rick emotionally, Carl has to deal with the repercussions pretty quickly. The next morning, despite all attempts to wake him, Rick is still passed out on the couch. Carl’s shouts bring walkers to the front door, so he leaves to take care of them.

At first he’s all calm, cool and collected, luring them away from the house and down the street. Before he ran straight into an unforeseen third walker, he was the perfect picture of a kid who’s grown up now with these walkers around. He can still remember the pre-apocalyptic life, too; just imagine what a kid like Lizzy (or Judith, if she’s still alive) will grow up to be like around walkers.

The walker trio almost overpowers Carl, but he manages to shoot all of them eventually. They land on top of him in one heavy corpsy pile, and he vomits after finally getting out from under them. I know I would too. He surprised me by putting his hat back on; I figured with all the father-son strife he’d ditch the one thing that is most symbolic of their bond, but after seeing him break down later in the episode, it makes sense that he’d still keep it. He may talk tough, but he still ends up needing Rick and deep down he knows he can’t stay angry at him forever.

First, though, he gives Rick’s unconscious form a great speech about how much he doesn’t need him anymore. He’s angry that Rick couldn’t protect everyone, that he couldn’t protect his own family. He’s angry at Rick for having any part, however indirect, in the Governor’s attack on the prison. He closes with a chilling “I’d be fine if you died,” and heads out to scout for more supplies. Say what you will about Carl as a character (though bear in mind how you were at the age of 14 before you do), but Chandler Riggs can deliver one hell of an angsty adolescent monologue.

On Carl’s solo supply run, he encounters another walker in the house he’s searching, and almost ends up getting a bite taken out of his ankle after wasting his last few bullets. I don’t know how he always ends up on the ground in walker fights, but it’s not an advantageous position to fight from. He loses a shoe but escapes with his life and 112 ounces of chocolate pudding, which he happily eats on the roof while the walker struggles to reach him through the window.

His tough façade breaks when Rick stirs in the middle of the night and gives a super convincing walker impersonation. Carl bursts into tears holding a gun on his dad’s groaning form, and he can’t bring himself to pull the trigger (just like Joe Jr. couldn’t in his note left back at the store. I see you, father-son parallels). Good thing, too, because Rick was actually alive.

Amid all this Grimes family drama, Michonne continues to kick walker ass and take names as she makes her way through the woods with her new pets. We are treated to the best dream sequence along the way, though, complete with visual Michonne backstory. At first it seems like a simple flashback to pre-apocalypse times with Michonne bantering with Mike and their friend Terry about art in her gorgeous kitchen. (Side note, her hair looks amazing in this dream sequence and deserves its own shoutout.)

We get to see her adorable son and then immediately get sad when we remember that she lost him. The coolest bit about the visuals here is how Mike and Terry change. The whole room changes into the apocalypse version, with Mike and Terry in different, dirtier clothes and even the walls becoming dim and ruined. They argue about camp, and about whether this is what they want for a life now. All the while Michonne just holds her baby and smiles, still in her blissful pre-zombie state until Mike and Terry are suddenly armless, and then all she can do is scream and wake up in an abandoned car with her new pet walkers tied to the outside.

The dream spurs her into action, though, and she ends up killing the entire group of walkers she was trudging along with, including her two captives. She runs back to the road she crossed where Rick and Carl’s footprints are still in the mud, and she tracks them to their new safe house.

As good as Chandler Riggs’ monologue was, I think Danai Gurira deserves the biggest acting props of the episode. She has mastered the art of conveying Michonne’s complex emotions relying solely on facial expressions. Her subtle breakdown as she talks to Mike in the general store? A thing of beauty.

Michonne is not prone to big emotional outbursts, so for Danai Gurira to completely capture a full range of human response and display it so subtly as fitting for the character is amazing to me. Most of the other characters are so upfront with their feelings, or even if they hide them they eventually come bursting out in a great big display, but not Michonne. With Michonne we get chin quivers, we get precious few tears, we get scowls that mean different things with different eyebrow movements, and we get genuine beaming smiles when the rare occasion surfaces.

And thankfully, the rare occasion for a Michonne smile did come, because she was able to find Carl and Rick as they had a heart-to-heart in their new house. Rick apologizes, and praises Carl on finding the extra food (though of course he also chastises him for leaving on his own like that). He admits to himself and to his son that Carl is a man now, and that he needs to treat him as such. That’s when Michonne’s knock comes at the door, and Rick comes down from checking the peephole with a grin on his face.

I can’t remember the last time a Walking Dead episode ended with people smiling. It was nice, though the moment was kind of ruined by an overwhelming sense of dread for what might happen next week when we catch up with everyone else who made it out of the prison alive.

After the action-packed midseason finale, it was a welcome change of pace to get such a character-driven episode that brought the focus back to telling human stories in a post-apocalyptic environment. Love and loss and growing up are things everyone has to face, whether they’re fighting zombies in the process or not, and I’m glad to see the show hasn’t forgotten the characters’ life stories that they’re trying to tell along with all the survivalist action.