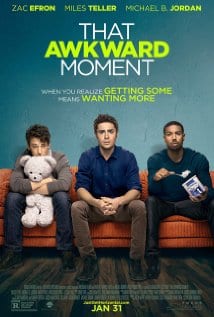 Freshman screenwriter and director Tom Gormican gets a lot of credit for getting financing for this movie. Not only is it a rom-com where the main characters are guys instead of clumsy, too-busy-for-men ladies, it’s also an original script that was somehow not adapted from a chick-lit novel or a self-help book.

That doesn’t mean this movie about single men in the big city is a great movie, of course. It’s not that great. Though an original screenplay, the concept is old as dirt: young men only want to hookup, women want more, are also from Venus, and the men are wrong and should settle down and enjoy monogamy like the rest of us. The editing is truly terrible (at least the print I saw- I have a feeling that the advance screenings had multiple versions). Plotlines remain dangling at the end, people come into the story and then wander away with no resolution. There are excruciating moments where the three leads, played by Zac Efron, Michael B. Jordan and Miles Teller, are clearly trying to ad-lib; as talented as I think these three gentlemen can be, they are not ad-lib worthy. Even the title reeks of having been changed and tinkered with a thousand times, based on arbitrary focus group recommendations. To make a long story short, it’s a freshman effort, and it looks like it.

But in the middle of this broiling stew of plot structure is a tremendous amount of potential and drive, both in Gormican and his leads. Jordan is the new it-boy after “Fruitvale Station” and a well-chosen television career, and Teller’s no slouch after a surprisingly lovely performance in “The Spectacular Now.” Efron is still trying to shake off the Disney as an adult, with mixed results (my favorite of his is “The Paperboy,” a grubby little soft-core porn thriller that everyone should see). Combine that with the appealing Imogen Poots as Efron’s love interest, and it becomes a not unpleasant 90 minutes at the movies, if only because you keep thinking that in about five years, all of these people are going to be better at their jobs than they are now. Gormican had to start somewhere, and you could do a lot worse than this.