A popular consensus regarding Sunday’s Super Bowl is one big, fat yawn. The Seahawks ultimately took home the ring, but the game left something to be desired with their early and massive lead. However, a major highlight from the game, excitingly, was the half-time show. Several naysayers are clogging the Internet comparing it to Beyoncé’s show last year, but there was nothing wrong with this performance. Bruno Mars and the Red Hot Chili Peppers delivered a genuinely fun, polished and upbeat performance from an unlikely duo, in typical Super Bowl fashion—I’m looking at you, Aerosmith and N’SYNC. 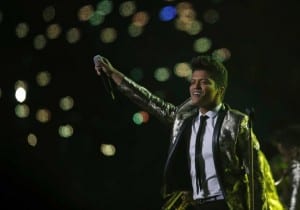 Bruno Mars at the 2014 Super Bowl. Media credit to the International Business Times

The performance opened with a chain of children singing the chorus to Bruno Mars’ early hit “Billionaire” with an American flag waving behind them. The premise seemed a tad odd, but quickly transferred into an equally surprising, but awesome drum solo by Mars himself. His drum set platform then slid backwards to the stage and he broke into “Locked Out of Heaven,” in typical Bruno Mars fashion, with a dancing entourage of musicians in matching sequined gold blazers. The performance was upbeat and certainly got the crowd jumping and belting along to Mars’ flawless vocals, complimented by slick dance moves including a pelvic thrust or two.

Mars then launched right into “Treasure” with more impressive live vocals and fancy footwork with his band in sync. However, quickly this tune shifted into a rocked out version of “Runaway Baby,” borrowing the line “a little bit softer now” from the Isley Brothers and transitioning into “Give It Away” by the partnering act, the Red Hot Chili Peppers. The Chili Peppers then exploded from behind the giant screens to pick up “Give It Away” with a classic performance including a lot of energy and lack of clothing (can you believe Kiedis is 51?!). The duo certainly got the crowd, and themselves, jumping! 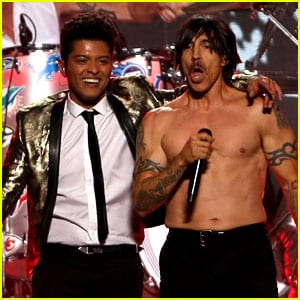 Then, the show took a sentimental shift with several video messages from active military soldiers dedicating Mars’ charming hit “Just The Way You Are” to their family members— suddenly making the children in the beginning of the performance a little more logical. Mars’ belted out this song solo with an impressive fireworks display to back him up.

All in all, this halftime show was energetic, patriotic, and genuinely entertaining. Bruno Mars consistently delivers when it comes to live performances with his signature 1950s reminiscent style and impressive chops. An appearance by the Red Hot Chili Peppers just added to the energy and hype of the show, proving that the group still has all their charm and excitement after 30 years. Yes, it may not have been a Beyoncé performance and we may not be talking about it for years to come, but these two made for a sincerely great halftime show sure to perk up any depressed Bronco’s fan at home and in the stands.