Formed just shy of two and a half years ago in Los Angeles, California, The Neighbourhood have been climbing the US charts with their 2013 release I Love You and most notably, their chart-topping single “Sweater Weather.” The band is comprised of four members: vocalist Jesse Rutherford, guitarists Jeremy Freedman and Zach Abels, and bassist Mikey Margott. To the observant reader, it may seem as though a key component is missing, and you are correct. Bryan Sammis, the band’s former drummer, departed from the rest of the group a short two weeks ago on January 16 to pursue a solo career in music, just in time for the band’s upcoming tour commencing on February 7 in Glasgow, UK to an already sold out venue. 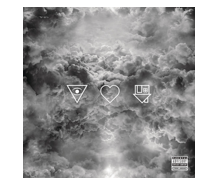 The Neighbourhood’s “I Love You” Media credit//BlackPandaPR

Despite this minor setback, The Neighbourhood have a lot to look forward to this year with their tour hitting venues across the United States, Canada, and the UK. Supporting acts include Lovelife, the 1975 (only in the UK), and JMSN. The North American dates kick-off March 7 in Phoenix, Arizona and end April 4 in Oakland, California after making a loop throughout the US and Canada.

Prior to their 2013 release, The Neighbourhood released two EPs through Columbia Records, their current label, titled I’m Sorry… and Thank You. I’m Sorry… actually contained the band’s number-one hit “Sweater Weather,” but the tune received a re-release with more success on I Love You. After the album dropped, the band toured in July and September with another indie-rock favorite Imagine Dragons. The Neighbourhood has also already performed at several festivals including Coachella, SXSW, Toronto’s Edgefest, Montreal’s Osheaga, Coastline Festival in Florida, and Not So Silent Night in Oakland California with acts such as Bastille, Lorde, and Phoenix.

The Neighbourhood’s sound fits perfectly into the current indie-rock scene with Rutherford’s strong, recognizable vocals and the band’s unique mix of rock, funk, and R&B. “Sweater Weather” specifically infuses indie-rock and funk with a notable and grooving bass line, and good luck trying to get that chorus out of your head. Another notable track from I Love You is “Afraid,” which also plays with tempo changes, but features a more synth-rock vibe and darker lyrics. “Afraid” is the band’s latest single from the album.

The Neighbourhood have recently enjoyed a lot of swiftly gained success, but 2014 is sure to give the fans a lot more to look forward to with the upcoming tour and the recent announcement of a new project titled #000000 & #FFFFFF, accompanying the track “Silver” that debuted on BBC Radio 1 in December.