Hailing from Tempe, Arizona, Destruction Unit is, to put it simply, a unique band with a unique sound. The group was formed by Ryan Rousseau thirteen years ago and has since expanded to five members containing JS Aurelias, Nick Nappa, Rusty Rousseau, and Justin Keefer. 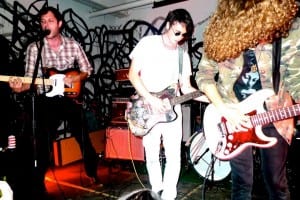 Destruction Unit can seemingly come across as typical noise rock band, characterized by dissonance with eardrum splitting guitar and thrashing drums, but these characteristics cannot garner the term “unique” alone. Destruction Unit’s vocals, provided by Ryan Rousseau, are, for the most part, drawn out, low, and quiet compared to the music. There are certainly moments of screaming insanity, as noted in the first couple minutes of the first track on Deep Trip, “The World on Drugs,” but around the 2:15 mark of the track, the vocals slow and take the listener to a whole different place with a melodic drifting similar to that of Doug Ingle from Iron Butterfly on their most recognizable track “In-A-Gadda-Da-Vida.”

This type of build up and release of tension is common on most of Destruction Unit’s tracks on Deep Trip and mostly controlled by the vocals of Rousseau. Destruction Unit has the ability to take the listener from a heart pounding, head thrashing craze to a floating, mesmerized state with the use of Rousseau’s expressive baritone and the repetitive, almost soothing, reverb of the guitar. This quality is unique in the realm of noise-rock because the music, to put it simply, is not just noise to the average listener, especially one that may not particularly be into noise-rock at first glance. Destruction Unit is able to widen its appeal with its music’s shifting tempos. The highs and lows of its songs excite and relax the listener, drawing in all types of rock listeners that appreciate a good mosh pit now and then.

Destruction Unit recently recorded its new album Deep Trip with its new label Sacred Bones Records and has already hit the road with a 15-date tour that started in Los Angeles, CA on January 17th and most recently stopped in Flagstaff, AZ on the 23rd.

The band may list “NOISE” as its sole interest on the band’s Facebook page, but “just noise” is certainly not the way to describe the intense, but grooving sound of unique noise rock band such as Destruction Unit.