It’s not too often you come across a person like Jon Gooch in the EDM scene. 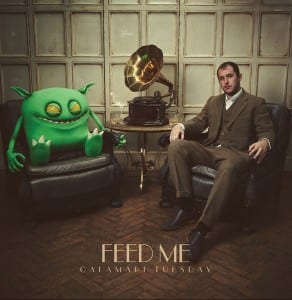 I have probably listened to Calamari Tuesday all the way through about fifteen times, and it’s still a staple album while I’m studying or just fooling around and need a nice variety of songs to listen to. I have been a huge fan of Feed Me from the start – since the days of Feed Me’s Big Adventure and mau5trap. Since then, Feed Me has continued to release music of the highest quality and creativity. The production and sound design of Feed Me’s music has always been top-notch, and this album is no exception. I enjoy the addition of classical piano included in most of Calamari Tuesday’s tracks, as well as the ubiquitous crisp drum and percussion production.

I have never heard a producer with the ability to instate so much mood in his music. Feed Me’s songs cause me to feel a wide variety of feelings, whereas festival trap and big room house simple do not. When I listen to music, I want every song to be an adventure, filled with intense emotions such as love, hate, doubt, and mystery. The whole idea behind Feed Me is that he is a character – a little, mischievous green goblin with a wide smile who can’t be defined or told what do by anyone.

I will admit: this review is particularly biased in favor of Gooch, but it is deservedly so; I simply want to share the amazement and passion I see in Feed Me’s music with the rest of the world.

This song is a fitting start to the album. Futuristic synths and string samples fill the soundspace, building up to a glitchy, bassy breakdown. I personally love when the cymbals kick in, and the entire breakdown always gets my fist pumping. Before the end of the song, there’s an excellent melodic portion accompanied by a drum build up, which is absolutely worth listening to the entire song for.

Previously released on the Death By Robot EP alongside Gravel and Dialup Days, this is a fantastically fun song with a rather silly robotic vocoder singing lyrics of an invasion. The breakdown to this song is excellently

Just amazing. Gooch explained this song represents the sound he’s been working for in his career as Feed Me. Lonely Mountain is extremely reminiscent of his older work, with Feed Me’s signature guitar solo-esque leads and vocal clips.

The best part of Lonely Mountain is the BPM change near the end, allowing Feed Me to reimagine the song as a dubstep track using the same sounds.

I first heard this song just under a year ago in Feed Me’s BBC Radio One mix for Annie Nightingale and I have not stopped listening since. The sound design in this song is impeccable, the vocals are beautiful, and the drop is hard. It’s amazing how wet the growls and wobbles are in this song; if you have a good sub it sounds simply wonderful.

Ah, rat trap. Essentially Feed Me’s take on the trap phase sweeping through EDM these days, this song definitely stands out from the others on this album. The 808 kick in this song is booming and the hollow, reverby/parallel compressed lead gives the song so much power.

Dazed is a very solid piece of progressive house. The synth in this song is incredibly stabby and dominates the track. The wandering lead is very reminiscent of the song Relocation. To me, this song is relaxing and beautiful – I have always had a love for Feed Me’s progressive house stuff, and I’m very glad he still comes back and produces music in this genre.

No doubt one of my favorites on Calamari Tuesday. This song is not a banger, but a beautiful composition with melodic vocal backing from Yadi. Horns blare the melody over a dub-sounding backdrop, a melody which was stuck in my head for weeks. Gotta love the delay on the snare here, as well as the guitar-sounding plucks on the off-beat. There is also a subtle arpeggiation over the drop which blends wonderfully with the rest of the track.

In an interview, Feed Me stated his intention to work with Yadi on future tracks, and I am undoubtedly looking forward to these tunes.

This song expresses Feed Me’s love for sampling/resampling and chopping up sounds and vocals more so than the other songs on this album. Mixed in with his signature gravely leads and growling basslines, this song is an exciting “banger” that should get the dance floor jumping. The lead-in to the breakdown reminds me of the soundtrack to a video game.

Hahahaha, you’re crazy for this one, Gooch. The vocals are cool in this song.

Once you get over the face-value absurdity of this song (I mean, it was supposed to go in the bin), you come to appreciate it as a break from the normal – Feed Me has always had a taste for the postmodern and this song feeds his appetite.

Apparently Feed Me thinks it’s cool to start every song with a random conversation sample.

Fiasco highlights a newer style for Feed Me. Fast-paced trilly leads race over a gritty electro-bass. The piano solo in the middle of the song is legendary, leading into a Muse/Queen-esque vocal bridge which amazes me every time. 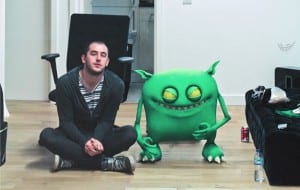 Feed Me and his monster. Media credit to Do Androids Dance.

Love Is All I Got

At 3:06 this is the shortest song on the album. Packed into those three minutes are enjoyable vocals, tight drums, and of course, bass. What makes this song great is the width and breadth of Feed Me’s sounds. He applies the same techniques used in producing his guitar leads, but with a midrange, bassy sound, which is ever so soothing to the ears.

An enjoyable, funky track – very different from other music Feed Me has produced. This song and Fiasco really show the versatility of master producers like Jon Gooch. There are a ton of precisely-placed vocal chops in this song which alongside the soft midrange synth and

No Grip reminds me a lot of the basslines in One Click Headshot, so fans of that song will probably have this on repeat. I live for the growls and glitchy basslines which dominate the drop. This song is also all about the piano lead in before the drop.

The growling bassline leading into this song is insane. Onstuh brings to the table: perfectly crisp drums, a grand piano line, screaming vocal clips, all leading up to a complexly arranged drop – pretty much everything you’d expect from a Feed Me song. The last two minutes of this song are purely awesome – the sidechained midrange and bass sounds are fantastic on top of the powerful kick/snare.

The last half of this album really explores some new avenues for Feed Me and his developed sound. I consider Onstuh one of the more defining songs of this album; it puts together all of the elements of Feed Me’s music that I enjoy the most.

Chills run down my spine as the introduction to this song begins – a sidechained chord structure leads in with accompanying piano chords. Jenna G’s voice chimes in as a higher frequency melody harmonizes with the already existing chord sequence. Has every word been said? The kick creeps up on you; a snappy snare chimes in. The vocals fade out as Feed Me’s saw chords and twinkling leads dominate the mix. It all crescendos into an epic breakdown – it sounds so full! – this song is very beautiful.

After the breakdown eases and the kick begins to fade, a beautiful symphony rises from the quieted chords, building, fluxating, sparkling, building – then just like that, it’s gone. Anyone who has ever said EDM is not “music” or doesn’t pay any attention to technique or require talent has never been so wrong in their life – and as you stand there in silence you begin to wonder what music means to you. If something can strike such a resounding note in your soul, does that make the synthetic arrangement of sounds and notes become more than just the product of technology and production?

Thus, Calamari Tuesday is over. Feed Me’s big adventure has entered a new saga – risen to a higher level. What began as a song and a drawing of a little green dude with curved teeth has become something greater. Jon Gooch is the avantgarde musician EDM needs – someone skeptical, someone mischievous who is always looking to step outside of his comfort zone.

What’s a full-length album without a bonus track? To me, this silly, classic video game sounding end to a masterpiece reflects on what Feed Me is all about. In the end, it’s the silliness that we all love and can relate to.

Related articles across the web