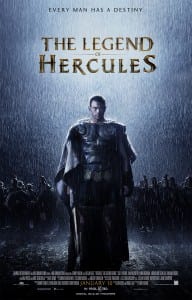 Well it’s January, boys and girls, and that means it’s Trash Time! For those not fortunate enough to know, the first two or three months of every year are dedicated to studios clearing their shelves of all their embarrassing-yet-profitable dreck for a tidy first quarter revenue stream. It’s beautiful, really- like watching black-hearted capitalism and American mediocrity romp together in their natural habitat.

We’re starting off with a doozy this year with “The Legend of Hercules,” by disgraced “Die Hard 2” director Renny Harlin. The execution of this movie is fascinating to behold. It’s a dim conglomeration of other movies- “Gladiator,” “Cleopatra,” “300”, “Spartacus”, etc. You want some slo-mo fights a la Zach Snyder? You got it. You want a revenge story where the villain tries to act like Joaquin Phoenix? Absolutely! You want weirdly designed sets where the wind is always blowing completely useless bed curtains around? No problem. And above all, do you want people delivering dialogue in hilarious ye-olde-fashioned British accents because that sounds classier? DONE.

What is this movie about? Well it’s about the Legend of Hercules of course, except that it’s not at all. The plot was completely made up out of thin air by no less than four writers (Really, movie producers? You needed to pay four writers for a 93 minute movie when there are several canons devoted to this exact character?) Hercules is the son of Zeus and a mortal mother, because Zeus likes to party, and is relegated to second-class status by his jealous stepfather (Scott Adkins). Now in the actual legend, there’s a whole snafu where he goes to live with Athena for a while, then is tricked into killing his own children, and then has to go on a bunch of adventures to make up for it. But that’s, you know, a little grim, so in this movie he simply wants to marry the princess of Crete, who’s engaged to his elder brother (Liam Garrigan) and stepdad tries to have him killed. He’s sold into slavery instead and becomes a gladiator to fight his way back to the top- just like in “Gladiator!” And you may say to yourself, “Wait, this is supposed to be Greece, not the Roman Empire, why are there gladiators?” And the movie would respond, “What is this, a history exam? Shut your stupid mouth and watch the movie it’s only got like 20 minutes left anyway.”

I really love sword-and-sandal epics, I think they’re fun and silly and exciting. And there’s a charming quality to Harlin’s filmmaking being so infinitely bad. My favorite part is a love scene between Hercules (Kellan Lutz- that guy with the moobs from “Twilight”) and his love Hebe (Gaia Weiss). In the scene there is definitely a smoke machine spewing mist along a soundstage, and it’s set with a green screen and some plants in the foreground meant to indicate a field. It’s so lo-fi, so analog, so incredibly fake, I actually enjoyed it more. It was set like a stage play, and the badness of Lutz’s and Weiss’s line readings notwithstanding, it was a genuine moment where I felt ok about what I was watching. But in general it’s just a terrible movie that was only made because a researcher for Summit Entertainment decided that Kellan Lutz’s abs were still commercially viable.

So that’s your inaugural film for Trash Time. Buckle up, kids. It’s going to be rough couple of months.