I’ve really been digging the 2013 Blast Holiday Gift Guides so far, including our two insanely-long women’s gift guides on Bombshell. Now it’s my turn. Here are five gadgets that a guy like me — handsome, bald, and almost 30, and into just about everything from cars to computers, would enjoy receiving.

I’m a gadget man, and not always by choice. I have a work iPhone, a personal iPhone, a iPad, iTouch, and even a few that don’t begin with the letter “i” and they are constantly running out of juice. This means I have to plant chargers all around the house, or plug in several A/C adapters to charge everything up. The PowerDock 5 is a fix for that.

With one device, I have a convenient landing pad for all my USB-powered devices. I can even put one of my police scanners on it! It doesn’t take up a lot of room, but it packs a lot of punch. It even delivers enough juice to charge 5 iPads at the same time. That would be more useful if I actually had 5 iPads, but that would mean I have a serious complex. 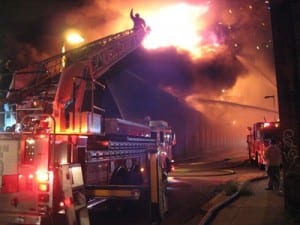 This I really like. CanvasPop will take any photograph and put it on high-quality stretched canvas. The company sent me a sample of one of my old news photos, and my fiancee swore that it was a painting. With CanvasPop, you can select a photo or integrate your Instagram and Facebook photo albums. You choose the photo(s) you want printed, customize it with sizes and a variety of frame options, and maybe even add some filters or effects. The result is a beautiful piece of photographic art that the shutterbug in your life will truly enjoy.

XT46 is form and function for people serious about their workouts. As I look to tackle the 2014 Boston Marathon in a few months, I have suddenly entered this realm.

Granted, some of these items are better suited for my brother, who is a firefighter and would actually need some of the functionality this clothing comes with. Nonetheless, XT46 battle/workout gear is comfortable, well-fitting, and tough. It’s also about half the price of Under Armour.

I received a few samples of XT46 lately, and did some more research online. I recommend (and want) the XT46 Battle Ready cold weather longsleeve. It seems like the perfect gear for the many, many cold weather training runs that are in store for me this winter.

If you’re looking for someone to settle the debate, you got the wrong guy.

Fact is, the Samsung Galaxy S4 and the Apple iPhone 5S are the two best cellphones in the world. They are backed by a library of third-party and OEM apps and a massive, engaged community of users.

Fact is, they are not much different.

If the high-dollar gift recipient in your life needs a new phone, get them one of these. I have both, and I love using both. Personally, the Samsung isn’t quite as integrated into the rest of my life as the iPhone, but if I really sat down and used it for six, eight months, I would probably never pick up an iPhone again.

Coin flip. At least that’s what the market says.

Anything written or endorsed by James May

Seriously, if we’re going to get personal for a second, my Amazon wish list is full of old truck parts and books by May and Clarkson. I can’t get enough of them, and with a new season of James May’s Man Lab airing, it’s no wonder the garage/project room/garage back room is just as important as the actual house I want to own some day.

If you have a guy like me, he probably already knows about these two Top Gear hosts. Alternatively, buy him the Get Excited and Make Things t-shirt that James wears on Man Lab.