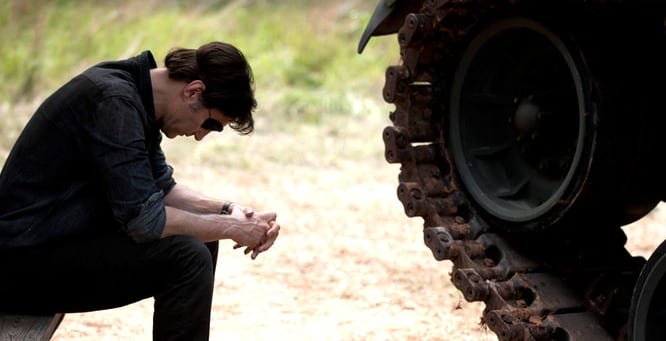 Too Far Gone was one of the most absorbing episodes of The Walking Dead I’ve seen to date. It was fast-paced, it was action-packed, and I loved it. I haven’t literally shouted at my television since we saw the Red Wedding go down on Game of Thrones, and I think it’s a good thing when a show draws you in so much you forget yourself and react so vocally your roommate has to come ask if you’re okay. For example, that is.

Despite all my gloom and doom predictions about Hershel since he got his big heroic moments in “Isolation” and “Internment,” I still wasn’t prepared for that death scene. I know the thinking is that the more important the character the more gruesome the death, but it was tough to watch the life drain out of Hershel after the Governor’s first swing.

The most touching part about Hershel’s death is his reactions to Rick. Rick’s down there alone, trying to reason with the Governor and reach a peaceful compromise, all while echoing what Hershel’s always told him: we do get to come back from the things we’ve done, no matter how terrible. The proud little smile on Hershel’s face right before the Governor takes his head with Michonne’s sword was the best thing to come out of this episode. Rick’s finally getting to a good place again, mostly thanks to Hershel, and at least Hershel got to see that before his untimely death.

Speaking of untimely deaths, the body count is high this episode: Hershel, obviously; the Governor, Meghan, Alisha, Mitch, possibly Judith, various anonymous survivors from the Governor’s camp, and of course a whole mess of walkers. Pretty standard stuff for a Walking Dead midseason finale, but the way all of these folks went out was what really made this episode work so well. It was a no holds barred bloodbath once the Governor decided to kill Hershel and attack, a scene straight out of the comics, and as horrible as this is going to sound, it made for some great television.

Seriously, gore factor aside, one of the things I’ve always admired about the Walking Dead is that it’s a show that isn’t afraid to take risks and deal with the consequences. There aren’t any reset buttons or easy retcons in the zombie apocalypse, and not everyone can make it.

It was eerie to watch the Governor give that speech to his new followers in the beginning of the episode, since it struck so many of the same chords as his Woodbury speeches. He preys on people’s fear and on their need to have a strong leader in uncertain times, and essentially convinces a whole new group of people to fight to the death for something they didn’t know existed before.

Lily, naturally, is not on board with “Brian’s” new plan, and seemed to finally start catching on that maybe he wasn’t as put together and peaceful as he seemed to be. I don’t know how nobody caught on to the fact that Peter and Martinez died suddenly right after the Governor showed up and declared himself in charge, to be honest, but they’re all falling right in line anyway just like in Woodbury.

After what seems like ages, we finally get a (short) glimpse of what’s going on at the prison before the Governor comes barging in with his tank and his new soldiers. Maggie and Glenn are still candidates for post-apocalyptic couple of the year, though Glenn is still in major recovery mode from the walker flu. Sasha is too, but she drags herself out of bed to thank Bob for the part he played in saving their lives. He doesn’t want to accept the credit, but there’s no time to delve into his psychology because shit is about to go down.

We finally get what all the Daryl/Carol shippers have been clamoring for, Daryl’s reaction to Rick banishing Carol. Predictably, he’s angry, and he keeps insisting that it’s not like Carol to have killed Karen and David like that. Personally I’m inclined to agree with him, but Carol did confess to it of her own volition, so it’s hard to say what else could have happened.

Daryl makes Rick go tell Tyreese about Carol now, and they find him down in the tombs. Rick’s about to break the news about Carol when Tyreese shows them what he’s found: a disemboweled rat, pulled open like something out of a nightmare biology class. He thinks whoever’s doing this stuff with the rats is the one who killed Karen and David. Before Rick gets the chance to tell him about Carol, the Governor announces himself with a mighty explosion.

Pacing-wise, it would have been awkward to fit more discussion of the Carol/rat killer situation into Too Far Gone, but I think it’s an important loose end to tie up eventually. I can’t see Carol feeding walkers or ripping rats open, so who’s behind that part of it? And are they connected to Karen and David’s deaths despite Carol’s confession? Hopefully she’ll be back come February with the rest of the show so we can get some more concrete answers.

My money is still on Lizzie having something to do with this whole mystery. I mean, look at the way she talked her sister into grabbing a gun with her, and look at those head shots she pulled on Alisha and the nameless extra that was chasing Tyreese with her. Something inside that girl is a little damaged, but we won’t find out what until later either, since she and Mika run off after they save Tyreese.

The battle was fast-paced and chaotic, perfect for getting us into the feel of the fight. Daryl using the walker as a shield and then destroying the tank with his grenade was 100% awesome, and I love that he and Beth are a team that make it away from the carnage. I liked what I saw of their growing friendship after Patrick’s death, and maybe we’ll get to see them work together more after the midseason break.

It was sweet, sweet justice that Michonne ended up being the one to kill the Governor. For a minute there as he struggled with Rick I thought Rick just might be a goner too. But nope, Michonne and her trusty katana swooped in at the right second to land a (hopefully painful) stab through the Governor’s chest. It’s fitting, too, that Lily gets to land the final shot to his head. After all, she lost her daughter twice: first to the walker by the river, then to the Governor when she brought him the body to put down. I don’t know what she’ll do now, hopefully she’ll find Tara again, but if the last we see of Lily is her putting a bullet in the Governor, that’s a good ending in my book.

It was so fascinating to watch the Governor go through all that he did in the last few episodes. We got to see what he was reduced to, what he could have been, and how in the end he couldn’t get away from being a tyrant. Rick, on the other hand, has clearly become a changed man. He tried to reason with the Governor, he didn’t claim any authority over the prison group, and he even suggested the two groups work together and share the prison in harmony so everyone can be safe. Last season’s Rick wouldn’t have done that – there were no compromises in the Ricktatorship.

Unfortunately that doesn’t mean he can’t still suffer losses; he’s reunited with a very alive Carl, but they both find Judth’s baby seat bloody and empty and break down together. I’m still not a fan of Andrew Lincoln’s onscreen crying, but I’ll let that go because everything else in this episode was so well-done.

And now, of course, we wait until February to find out what happens to our scattered favorites: Beth and Daryl, Rick and Carl, Maggie, Sasha, and Bob, Tyreese, Lizzie and Mika, Michonne, Glenn and the busload of survivors, and Lily and Tara. I’m sure most of them will find each other again soon, but until then it looks like we’ll get to explore more of the post-apocalyptic world, run into some more walkers, and hopefully meet new groups of survivors.

Any theories on what’s in store for the second half of the season?