This list is comprised of my own personal life-ruiners in the world of television. And I say that with the most negative connotation. These characters not only irritate me, but have in certain cases kept me from fully enjoying some of my favorite shows. So if you were expecting to find a positive list of absurdly wonderful people you’ve come to the wrong place.

The top 10 television characters who are life-ruiners, in no particular order

She is probably my least favorite character in the history of television. To say she completely ruined Glee for me wouldn’t be true, but she was certainly one of the primary reasons. I can understand why people like her; she’s pretty, incredibly talented, and she certainly receives more than your average dose of bullying which makes her relatable. But these qualities can’t disguise the horrible character that lurks underneath. She is self-obsessed, arrogant, self-entitled, and just plain obnoxious. Not only that but she was involved in one of the most toxic relationships I have ever had the displeasure of witnessing. Rachel Berry is considered by many a role model, because she always chased after her dreams and never let bullies keep her down. But, let me remind you that she would have given it all away for a man who prayed to a grilled cheese sandwich that she’d let him touch her boobs.

While not being on a TV show, she has me changing channels to avoid her. Flo is one of those characters that irritate you for reasons you can’t accurately explain. Isn’t anyone else tired of her commercials? Her quirky charm and perky grin have run their course as far as entertainment value is concerned. My automatic response to her voice has been to hit the mute button. The worst part of it all is the cheesy humor I now associate with Flo. It’s never funny, even though they try so painfully hard to make it so. I don’t blame Progressive for wanting to create a lasting character; the Geico gecko and Afflack duck will never tire. But Flo’s career continues to decline, and her advertisements earn nothing but a roll of my eyes.

I used to love how strong and independent Sookie was, but the writers of True Blood have destroyed her character. And by destroy, I mean completely mutilated to an unrecognizable state. She started out as an incredibly positive role model. Sookie was strong, brave in the face of horrific disaster, and she had a firm sense of self. With her special abilities, she was more than capable of taking care of herself. But she has been morphed into this naïve girl who welcomes many a supernatural being into her home with open legs; this despite her constant persistence that she was going to avoid them at all costs. I guess it is certainly possible, considering HBO is the home of this show, that they just needed more sex and fewer women who managed to stand on their own two feet. Or perhaps the change of writers was the cause for Sookie’s abrupt character demise. Either way, I miss the Sookie Stackhouse we were introduced to back in season one. Here’s hoping she redeems herself in the final season.

Pinpointing what I despise about this character is difficult. I think it’s primarily that her decision making is absurd and a little unrealistic. (Spoiler alert ahead! Avert your eyes if you haven’t seen Under the Dome and actually intend to watch.) You find out the guy you’ve been sleeping with murdered your husband, and you’re cool with it? She processed the information for barely a second before moving on. What a way to honor your late husband, by ‘falling in love’ with the man who killed him. And her voice hits my ear the wrong way. Her narration over the opening of every episode is unnecessary, and I have come to loathe it. We get it, you’re all trapped in a dome in Chester’s Mill, you don’t need to remind us every single episode. I was hoping she’d grow on me since she is certainly a central character but no such luck. And maybe it’s just me but her acting isn’t exactly spectacular. I always feel very aware that she’s acting. She has yet to manage to really pull me into a scene.

There is not enough love for Seth Holt on Parenthood because Mark Cyr is busy hogging all the attention. I don’t understand the appeal, aside from the striking similarities Jason Ritter has to his father. RIP John Ritter. His character is stiff, and his scenes are boring. I guess he’s intentionally awkward and uncomfortable most of the time, but it’s painful to watch. He is literally too awkward to function effectively in a scene for me. And this supposed chemistry people see between him and Sarah… can someone point it out to me please? I’ve looked for it, believe me. I wanted to like them because it seemed very plausible that they’d end up together. But it was like searching for Waldo in an I Spy book. Guess what? You’re never going to find him.

Life-ruining tag team! These two gave us all an unrealistic expectation for what love is like. I know that sometimes high school sweethearts really do work out, and I am aware that considering it is essentially a teen soap opera they sometimes strayed from realism. But this relationship went through more than any two people should ever go through, but somehow managed to survive. Many from the fandom rooted for them, and undoubtedly rejoiced every time the two stayed strong under pressure. And they do look beautiful together, I will give you that. But eventually, watching them reconcile after yet another incident just became monotonous. They were so happy and in love that it irritated me. Perhaps I’m the only one who doesn’t always prefer a sappy love story. But, most of the time watching drama unfold is better than the happy ever after.

You’re either Team Brenda or Team Kelly and I’m surprised anyone is Team Brenda. She always had her nose up in the air, considering herself better than everyone. She was hypocritical, hating people for doing things that she had once done herself. She was attention hungry, and felt that she deserved everything handed to her on a silver platter. And she has this constant resting bitch face which makes her anything but approachable. Thankfully, Brenda didn’t stay for the entire series run. Team Kelly for life.

My hatred of this character stems from my complete adoration of Marissa Cooper, I’ll admit it. Once she was gone and Taylor slid into her place, I had zero interest in a show that I had loved for years. The entire show was centered around the fab four: Seth, Summer, Ryan, and Marissa. This group is the reason I fell in love with The OC, their chemistry natural and fresh. Taylor had been mentioned before, always in a very negative way, and she didn’t get much screen time until after Marissa was gone. She was uptight and bitchy, for lack of a better word. And she was definitely not a friend of any of them. Then all of a sudden there she is, dating Ryan, staking her claim in what wasn’t supposed to be hers. I probably should have left her off the list, considering my reasons for disliking her are few; but just thinking about her and the way the series ended breaks my heart. So she earns a well-deserved spot.

Yes, the show is based around Dawson and the people he interacts with. But it expands far past his narrow view, and the other characters outshine him. His boyish good looks and somewhat romantic moments almost redeem him. But he has a black and white view of everything that just gets frustrating. He’s far too into himself; it’s always somehow about him regardless of the situation. Plus his word choice always made it seem like he thought of women as objects more than things. Alongside his best friend Pacey, he practically fades into the background. And that is precisely why he lost the girl in the end. 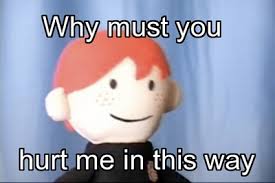 And last but not least…

Anyone who tries to destroy your OTP

Maybe this is a cop-out because I can’t think of a tenth character I despise. But, I think we can all agree that these people are the worst. And for those who don’t know, OTP stands for one true pairing. Don’t you just hate it when your favorite couple is torn apart by a third party? You can’t help but hate them for crushing your dreams, regardless of how wonderful they may be. Damn them, the ultimate life-ruiners.