In what has become a yearly global event, Call of Duty came out last week and sold the predictable millions of copies. Surprisingly enough, this is the first time in three years that a new story arch is added to the franchise. Yet, despite the new setting, new hardware and next-generation expectations, Call of Duty Ghosts feels older than ever.

The story is short, dumb, and stupid. Considering that Infinity Ward had a chance to start fresh with new characters and intriguing plot twists, it is a big disappointment for the dozen or so people that still buy a Call of Duty game for the story. Sadly, I am one of those people. Ghosts takes place about 30 years in the future where the United States is no longer a superpower and it is attacked by an evil empire based in South America. It seems Call of Duty got tired of placing you as the good guys who are always on the winning side and pulled every string imaginable to make America as vulnerable as possible and every fight seem like you are defending against insurmountable odds. 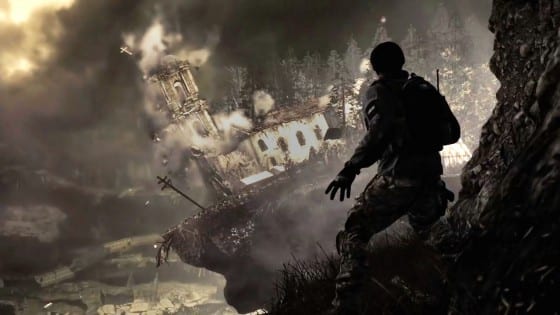 To add to the ridiculousness of the story, the characters you interact with are all the same grizzled white dudes we are accustomed to seeing. Nobody stands out or has any depth to their lives past the muzzle of their gun. You’ve seen these archetypes before and know exactly what they are going to do. At least Soap and Price had some level of buddy cop camaraderie, making the three Modern Warfare games interesting beyond the annihilation of the western hemisphere. I honestly don’t care what happens to Logan and Hesh (who names their kid Hesh?) in this post-apocalyptic United States. After seeing the risks taken in Black Ops 2 to add some replay value to the campaign, this is a huge step back for the series.

However, it can be hard to discount how fun some of the stupidity can be. When you are having a gunfight in space or rappelling down an office building in Caracas, you are guaranteed to enjoy yourself, at least on the surface. The core gameplay still boils down to moving forward and shooting foreigners, but at least the ways in which you are doing them will get your adrenaline pumping. It is like a bad summer blockbuster, sometimes you don’t care about the stereotypes and just want to see shit blow up. 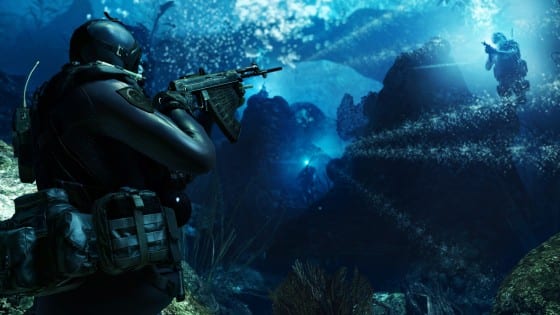 But a bad story in a Call of Duty game is like a boring opening band at a music festival, you aren’t there for that. The main act is multiplayer and despite having a few more refined edges, it is still a similar offering as it has always been.

The biggest omission this year though is the lack of the intuitive Pick 10 system introduced in Black Ops 2. Instead, you are left with a rather confusing numbered perk system, where each perk is awarded a value. You can pack five perks that cost one point or drop it all on a five point perk. While it does add some customization, the method is only applied to perks, not any other things you might bring to battle. Pick 10 was great because it let you mess with your entire kit, maybe overpowering a weapon with attachments rather than carrying too many perks to battle. What is at play here does not feel like an evolution in the series. 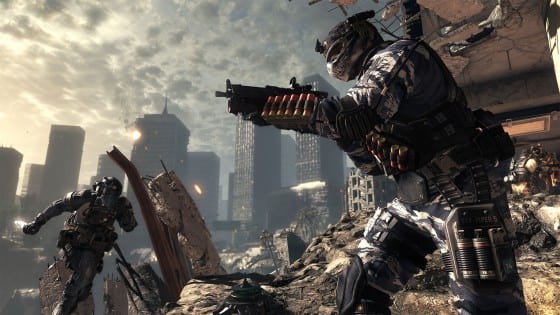 The few additions come in a couple of game modes, more notably Search and Rescue. This variant of Search and Destroy allows you to revive fallen teammates by picking up their dogtags when they are shot. It lets the games go on for longer if a fatal mistake was made. A nice change was made so that the scoreboard is shown on the upper right corner of the screen rather than taking up your entire viewable space, something that has been long overdue. Strangely, Infinity Ward chose to omit the entire movie editing feature that has been a part of the Black Ops multiplayer suite.

At this point, the multiplayer in Call of Duty is going to be near perfect no matter what is done, but taking out well received features in favor of over-complicating things is taking an obvious step back. Maybe having five development studios working on the franchise has finally taken a toll in the overall polish of the package. 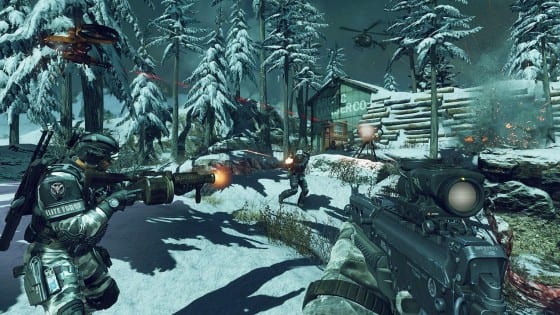 In favor of Treyarch’s zombies, Ghosts brings a similar game mode called Extinction. Akin to its cousins in Gears of War and Halo, Extinction has you take on countless waves of aliens as you try to destroy their hives. The mode is fun and adds much needed variety to the series, but there is only one level. Once you figure it out, the replay value is negligible. There is clear room for DLC here, and sadly it is obvious they held back on the final product.

[rating: 3/5]   Taking aside all of the nitpicking, Call of Duty Ghosts is still a fine shooter. It follows in the steps of its predecessors to the tee and does little to change on the tried and true formula. The story is filled with “tell your buddy” set pieces and the multiplayer is the twitchy glory it has always been. Unfortunately, Infinity Ward blew its chance to start clean and delivered the most predictable Call of Duty in years. While the running joke may be that all the games are the same, the truth is there was a clear effort to build on a successful franchise every year. This time around, there are cracks showing at the edges.