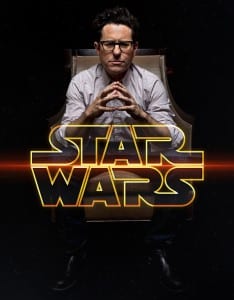 J.J. Abrams has to make the original (and, sadly, the second) trilogy WORK with his trilogy, not blow it all up and start over

There are so many things we want to see happen in Star Wars VII. From Harrison Ford cameos to fantastic space battles, everyone has a vision of what they want in the film. The possibilities are endless. However, there a few things director J.J. Abrams should steer clear of.

In Star Wars VII, we DO NOT want to see:

There were many beloved characters in the last six Star Wars movies. Some of them, tragically, didn’t make it. It was sad, we all cried, but in most cases it was the way the story had to go. Nothing would make this movie irredeemable to me more then reanimating a dead character from the first two trilogies. There were very few characters (beyond pilots and clones) whose deaths were insignificant and didn’t enhance the plot and add meaning to the story. Taking back those moments would damage the existing material and give the impression that JJ Abrams can’t make the trilogy work with his own characters. Now, I’m not saying dead characters can’t be incorporated into the story, but don’t bring them back to life.

Fans tend to agree that the prequel trilogies have a lot of problems. However, I think its fair to say that most of them are innocent, misguided attempts. No one intentionally tried to write Padme and Anakin as wooden and cheesy, and no one said, “Hey! I should make this political subplot as confusing and boring as possible!” These parts are slightly forgivable. But blatantly racist characters that ooze negative stereotypes? That is not unintentional, and it is the most disgusting part of the Phantom Menace. I don’t know George Lucas thought characters like Watto and Nute Gunray were good additions to the series, but it smeared the name of Star Wars and we do not want to see episode VII make a similar mistake.

Okay, anyone who has seen Abram’s Star Trek movies knows what I’m talking about. J.J. Abrams has made quite the name for himself by using highly visible lens flares in his revival of the series. Seriously, they’re everywhere. Constantly. I’m not saying they were all bad for a Star Trek, but they’re certainly all bad for Star Wars. Star Wars is not an ideal version of the future where everyone wears perfectly pressed colorful uniforms and travels around on a shiny sleek ship. Star Wars is not quite a dystopian series, but it embraces the grey areas of humanity and the grit of a more realistic future. Shiny pretty lights don’t go with the tone. Plus, they’re kind of really annoying.

4. A Rehash of the Last Six Films

If they’re going to give us new Star Wars movies, they need to give us new Star Wars movies. By all means, put in callbacks to earlier films, cameos from previous stars, and Easter eggs for fans. However, don’t make us pay money to basically re-watch episode IV. So many sequels, trying to connect with the original, wind up basically copying it. Not to keep bringing Star Trek into this, but our director’s most recent foray into classic sci-fi is so guilty of this you could easily call it a remake of Wrath of Khan. Stay true the series’ roots, but give us a new story and new characters to love!

5. Special Effects as the First Priority

The Star Wars movies are science fiction action movies. Obviously the special effects need to be great. We want these movies to wow us with explosions and flight scenes, right? However, we don’t want the special effects to be the first priority and the thing on which the film stands. Back in the ‘70s and ‘80s, Lucasfilm made three of the best action movies of all time using little model imperial walkers. The prequels tended to emphasize visual quality over intellectual quality, and it didn’t work. Character development and dialogue should be most important.

There. I said it. The elephant in the room. Our beloved saga is being continued by a company that had its own smash hit the year Star Wars came out, a little film called The Many Adventures of Winnie the Pooh. This is not necessarily a bad thing. Disney is a tried and true company that has made enjoyable adult films like Pirates of the Caribbean and owns the whole Marvel franchise. Furthermore, a lot of fans felt that George Lucas lost his touch over the years and a new player might not be such a bad idea. Still, even Pirates of the Caribbean is campy and slapstick and views piracy through Disney lenses. We believe the Walt Disney Company is savvy enough after almost a hundred years to pull this off, but they need to make sure the saga’s grit isn’t lost.

Darth Vader. Anakin Skywalker. That annoying kid with the pod racer. Whatever name you choose to call him, he is a timeless character. He will go down as one of the greatest villains in cinematic history, and his fall from grace and redemption arc, while poorly executed at points, was still the sagas’ greatest element. It was the driving force behind six beautiful movies. The key word there is “was”. The story of the troubled Skywalker has been fully told. In fact, it’s been a little over-told. Luke may lead the original trilogy, but when you look at the saga as a whole the six movies are clearly Anakin’s story from start to finish. It’s time for someone else to have a turn, and Darth Vader needs to not play a role in this movie! I’ve already said that he shouldn’t be reincarnated. Beyond that, the writers need to resist the temptation of giving Hayden Christensen a posthumous cameo like he had in recuts of Return of the Jedi. I don’t even care that it’s Hayden Christensen. That’s not the problem. They could screw continuity and have the fantastic James Earl Jones show up on screen and it still would be uncool. Frankly, they should even be wary when involving Anakin’s legacy or impact too heavily beyond the obvious inclusion of his decedents. The boy from Tatooine’s day has come and gone and it’s time for a new Star Wars story to be told.

The Empire Strikes back has, in my opinion, one of the most romantic scenes in cinematic history. You know the one I mean. It’s iconic. Han and Leia were my first ship and their relationship is timeless. But guys, Star Wars are not a romance! It’s an action film with a focus on family and balance. If a relationship works with two characters, then by all means, make it so! However, one of the biggest problems with the prequel trilogy is that Lucas was trying too hard to recreate Han and Leia’s chemistry and wound up giving us a couple we couldn’t believe or root for that was clearly stuck in there for the sake of having a couple. Han and Leia weren’t even love interested in the first film! However, the characters had an organic, natural chemistry and sassy personalities that made them interesting and compatible. If this kind of believable fit happens between two character and actors, then a romantic pairing should certainly follow, but if not, then don’t worry about it! The saga does not need a love story for it to work, and it certainly does not need one like Anakin and Padme’s.

I am not contradicting number one here, I swear. Since The Empire Strikes Back premiered in 1980, Yoda has been the symbol for all that is wise and good in the Force. The original film didn’t have him, and it certainly managed fine, but since then Yoda has become the ultimate mentor and warrior combo and a flagship part of the series. I truly think at this point a Yoda-less movie just wouldn’t seem complete. That’s not to say I want him brought back to life. No way. However, George Lucas gave us the lovely device of force ghosts that would allow for a nice cameo. Sure, Vader is iconic too, but like I said, we saw that whole arc and he needs to be retired. Yoda is still an enigma and too great a character to not throw in once or twice. We’d miss him too much!

One of thrills of each new Star Wars movie is seeing the new planets and aliens that have been created. It’s a complex world and we want to see it grow and show us more exciting things. However, (and yes, I’m mentioning Star Trek again) J.J. Abrams and his team got carried away with this in the Star Trek movies and basically created all new aliens for the background scenes, ignoring seasons of interesting and beloved species. This is an understandable tendency for a director who is having fun inventing the species, so I’d be mentioning it anyway if Star Trek hadn’t happened. Of course expand the universe, but don’t let it take away from the fantastic culture and species we’ve grown to love.