Best in the World*

Every wrestling fan knows that there’s just something about Wrestlemania. For thirty years, World Wrestling Entertainment’s biggest night is always one of spectacle and awe where anything can truly happen. It’s a night like no other and it’s the perfect focal point for 2K Sport’s first foray into the wrestling world.  With WWE 2K14, the developer celebrates the proud history of the event while still showcasing the company’s young current talents. It may be a bit uneven at times and be feature some of the worst commentary of the series but with a roster and feature set like this, no WWE fan should miss WWE 2K14.

The heart and soul of this year’s WWE game is unquestionably the 30-years of Wrestlemania mode, which takes you through at least one match in each of the event’s past iterations. From Big John Stud’s body slam challenge to Andre the Giant in Wrestlemania I to Shawn Michaels and Razor Ramon’s epic ladder match at Wrestlemania X and even today’s modern contests, each of the highlighted matches features a full storyline and often recreations of pre-match interviews featuring actual audio from the event (Randy Savage’s rant against Hulk Hogan before their match at Wrestlemania V is a highlight). It’s clear from the amount of detail put into the mode that 2K did their research as everything from the managers and WWE personas are accurate to the time, sort of a 90s WWE Shop logo is spotted in the rafters of some of the early 80s Wrestlemania events for some reason.

One of the reasons 30-years of Wrestlemania works so well is because of the “Wresltemania Moments” feature. Similar to last year’s Attitude  Era mode, each match has a list of criteria you’ll have to meet to completely move on to the next event. You’ll often be asked to do something that will initiate an in game movie sequence and quick-time event that mirrors the events of the actual match. It’s neat to be able to recreate these unforgettable moments in WWE history and it’s also helps to make the matches more authentically paced and realistic. There are times though when these Wrestlemania moments hurt the game, like when I was playing the Wrestlemania 4 match between Randy Savage and the Million Dollar Man. I went to the top rope to deliver Savage’s classic elbow drop finisher and nailed it, but it then triggered a moment where I missed and forced the Million Dollar Man on to offense.

Also new this year is The Streak mode which celebrates The Undertaker’s undefeated streak at Wrestlemania. You’ll have the option of trying to defend the streak as The Undertaker in a gauntlet style match or attempting to beat the Undertaker and break the streak. The later is the far more interesting choice but beating The Undertaker is a tough and often frustrating experience. Undertaker is the wrestling equivalent of every cheap boss you’ve fought against in every fighting game. He can reverse every single one of your moves and no sells the ones that you do land. Oh, you just wailed on him for two minutes with the steel ring stairs? Watch him get up and run at you as if he hasn’t taken any damage. I seriously hit him with every weapon I could find, then hit him with a rock bottom through the announcer’s table and I only got…a…one count?  No thanks Deadman. No thanks.

Save for the frustration, The Streak Mode is well done. Pick an opponent that Undertaker has faced before at Wrestlemania and you’ll fight in that Wrestlemania arena, but if you choose someone he’s never squared off with, it’ll take place at this coming year’s Wrestlemania from New Orleans. It’s interesting though that such a publicized mode is so hard to find in the actual game. It’s no where to be found in the in-game menu and you’ll have to go into the 30-years of Wrestlemania mode and arrow over past all of the locked content to find it. It was a bit confusing, I thought at first that it wasn’t included in my review copy. 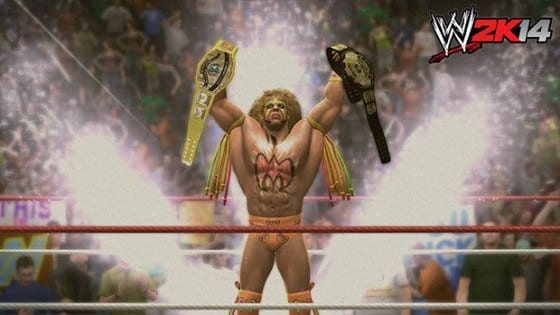 2K14 also features unquestionably the greatest roster ever seen in a wrestling game. From the stars of today like John Cena and CM Punk to classics like Andre the Giant and The Ultimate Warrior, there isn’t a generation not well represented. It’s extremely fun to make enact all of those dream matches everyone has been craving for years now. My Wrestlemania card featured CM Punk taking on Stone Cold Steve Austin, Hulk Hogan meeting the mess he’s become in a match with Hoillywood Hulk Hogan and even Ryback VS Goldberg. What’s most promising is the fact that the game still features the impressive creation suite and the ability to download anyone’s creations, meaning the possibilities are endless.

WWE 2K14 features a number of issues that return from previous editions of the game, but none is more glaring than the utterly terrible commentary.  Matches are called by a combination of Jim Ross, Michael Cole and Jerry Lawler and it’s nothing short of nails on a chalkboard. They often have no clue what’s going on in the match and are spend their time rattling off promotional slogans and random facts about the WWE. Did you know that WWE Magazine is on newsstands this month? Michael Cole is sure to tell you. What about how a no-hold’s barred match means that there are no rules? Jim Ross is going to make damn sure that you know. I’ll have to admit that it was a bit funny to hear some of the downright dumb things they would say. One match Jim Ross was obsessed with monkey flips and somehow, even when a title wasn’t on the line Jerry Lawler was quick to yell “We’ve got a new champion” at the end of matches.

The most irritating aspect of the commentary takes place during the 30-years of Wrestlemania mode where regardless of what era you’re in, the modern day commentary team is calling the action. Now, don’t get me wrong, I get why this was done, but if you can’t give me Gorilla Monsoon’s classic call of Hogan slamming Andre at least make it make sense. Lawler, King and Cole call the action as if it’s happening today and it’s the current feud on WWE TV. This strange time paradox just feels unnatural and it seems like it would be better to have them know that their watching an old match, heck – make it an excuse to plug the company’s excellent video library.

There’s no way around it, even with its technical issues and utterly terrible commentary, WWE 2K14 is the best wrestling game in at least the last ten years. It’s got a dream roster, tons of content and a remarkably sound engine. If you’ve loved the WWE during any of its memorable periods you’re sure to find something to love in WWE 2K14.