Donald Glover rose to fame as one of the notably hilarious cast members of the show Community, gaining special attention when his character Troy and Abed, played by Danny Pudi, found their comedic chemistry. But his recent Instagram posts are anything but funny. 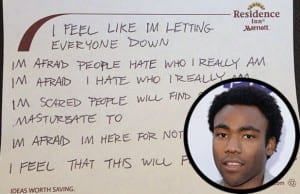 Although the actor admits that he’s been feeling down lately, he now claims that these rants were just his way of getting some of these negative emotions out of his system. In the midst of an existential night where he wondered what he is doing here, he felt the need to “write down [his] feelings.” He says that he was merely using Instagram as a forum for “expressing [him]self.” As far as he is concerned, this was no different than someone writing in a journal or having a conversation with a friend when they are feeling down.

Many people took his comments to heart and expressed their concern that he is depressed. “If I’m depressed, everybody’s depressed…I don’t think those feelings are that different from what everybody’s feeling. Most people just don’t tell everybody,” he says.

In between speculation about his mental state and whether or not he left his role on Community to become a rapper, Glover says he is tired of answering when people ask him what is wrong.

As for his public vent-session, he says “I’m glad people saw it. I feel like I got some stuff out there,” he says. “I got it off my chest. It felt like I had been holding onto something.” Hopefully this expression of his feelings has a cathartic effect for the actor/rapper and he can get back to what he does best: entertaining the world.