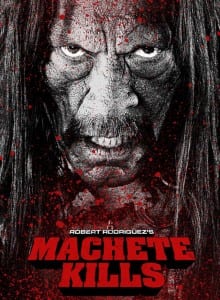 I only just saw “Machete” a few weeks ago- I caught a poorly edited version of it on TNT or FX or something- so I have only been recently entranced by the Robert Rodriguez 70s action schlockfest/softcore porn/loving homage to Mexican-American culture. But entranced I am! Because, come on, it’s a 70s action schlockfest/softcore porn/loving homage to Mexican-American culture! With Danny Trejo and his magnificently battered face as the lead, screwing beautiful Latina women half his age (all ethnicities, really- “Machete loves everybody.”), and splitting men in two with a giant machete! It’s like Robert Rodriguez invented this specifically for Emma Johnson’s sugar-spiked lizard brain!

Of all the miracles that postmodern, ultra-self aware filmmaking has wrought, this is one of the best: a balls-deep, deeply silly, yet deeply affectionate piece of garbage, with a core of overly-stated but heartfelt commentary on being Hispanic in the United States. And Rodriguez must know what the people want (or at least what Emma’s lizard brain wants), because he throws more of the same at us in “Machete Kills.” I don’t really feel like giving you a synopsis, because why? So I’m just going to give you a list of the top ten reasons why this movie is worth the $10:

Cons: There’s not enough Jessica Alba (which plotwise makes sense, but is sad because she’s great in these movies), and Mel Gibson is not nearly batshit crazy enough as the villain. That’s right- Gibson plays it too straight. Unacceptable.

There will be a third “Machete” movie, no doubt with the same amount of gore and insanity and lizard brain-approved antics. The id gets a bad rap from the higher functioning superego lobby- if higher reasoning is what separates us from the animals, the id is the reminder that we are still just a few chromosomes away from our primitive selves. And that self likes motorcycle explosions and sideboob.

Sometimes you just need to give the lizard brain what it wants.