In every movie nerd’s subconscious, there is a file marked “Do Not Destroy.” In that file are all the cinematic images that have refused to be washed away by the tides of lifelong media saturation. Among other things, my file has: the final scene of the original “Wicker Man;” the moment in “Fargo” when Frances McDormand chastises Peter Stormare for killing all those people “for just a little bit of money;” Uma Thurman and John Travolta dancing the twist in “Pulp Fiction;” and when Ben Stiller yells at Billy Zane in “Zoolander.” When I am 95 years old, I might not remember my own name, but I will definitely have a clear picture of Derek Zoolander shouting, “Put a cork in in, Zane!” right before the Model Walk-Off.

I will also remember a section near the middle of “Gravity,” where Sandra Bullock hauls herself into the International Space Station, hysterically pulls off her helmet and suit, and rests there in her tank top and underwear, suspended in the air pressure hold like a fetus in utero. Earth, shocking when seen in its full diameter, sits silently in the background. It is the most beautiful (though certainly not the only beautiful) shot in “Gravity,” lovingly created by Alfonso Cuaron.

It’s about many things. The plot is not all that new- astronauts encounter enormous odds while in space. But it’s about more wonderful things. It’s about the vulnerability of our bodies (and our minds), and about space as a silent but unrelenting force powered by lack. Lack of oxygen, lack of weight, lack of air pressure, lack of heat, and sound. Most importantly, lack of a stable surface to stand on, and the titular force that tethers you there. Beyond basic survival needs, our identities as humans depend on these laws of physics. And without it we are lost- in more ways than one. 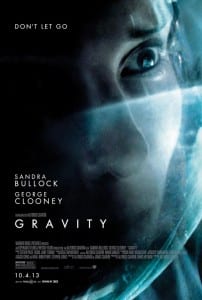 The movie is peopled only by Bullock and co-star George Clooney- an Adam and Eve of sorts, who respond only to each other, or to the disembodied voices emanating from their communications devices. Bullock and Clooney have a wonderful naturalness with each other- they carry the movie together with ease and honesty. Clooney’s performance hilariously asks the question, “If George Clooney was an astronaut would that make him even hotter?” He’s infuriatingly calm about the rapidly deteriorating situation around them- it reminded me of listening to the recording of Captain “Sully” Sullenberger landing that plane in the Hudson River- the almost unimaginable focus on the logistics of the tasks at hand. And at first I was annoyed at Sandra Bullock- why did the woman need to be the crazy, panicking one? But her performance has edges and layers that don’t strike you until later. Much of her performance is wordless and physically-limiting but she expands her character without any difficulty.

Stanley Kubrick’s “2001: A Space Odyssey” is the obvious reference here, and though there is no malicious H.A.L., there are certainly parallels. Kubrick too was fascinated by the concept that space has no sound, for example. But unlike Kubrick, this is a decidedly warm and human drama, and surprisingly gentle for a movie all about what goes wrong in space. There’s much hay being made of the scientific discrepancies of the film- Neil Degrasse Tyson had a good time on Twitter recently, discussing the scientific discrepancies in the film (the most hilarious of which is the fact that Bullock is playing a medical doctor but for some reason is engineering a portion of the ISS telescope.) But the fantasy of space makes those discrepancies moot- whatever weird details Cuaron omitted or changed, it does not negate the unbelievable contradiction that humans are routinely going to a place there they (biologically at least) have no business being in.

Though one shouldn’t quote me, I have a feeling that the final ending of “Gravity” was different from the original cut- a more natural ending comes about five minutes earlier, as Bullock is attempting to re-enter earth’s atmosphere. The end here would have been more aligned with the ending of “Children of Men”- fraught, but ultimately hopeful. Such a phrase could describe space travel in general: a fraught, but ultimately hopeful industry. It’s an industry that wants to discover the furthest reaches of this vast wasteland we have no business being in for the best, and most human, reason of all:

Because…well, why not give it a go?