Often times context can have a major impact on reviews. Us writers are gamers as well, and despite our attempts to remain objective, we cannot help but be excited about a game. Not to mention when you receive a game in mail that you have been waiting five years for, your first experience will be a rosy trip, save for the game being an utter disappointment. GTA V was not a disappointment, and it will probably make the short list for game of the year, but for those of you who have been waiting to pick up the game, here is a second look at it now that the hype train has left the station.

Building on the shoulders of your predecessors is never easy, especially when you are the latest in a series as influential as Grand Theft Auto. Each game has marked a stepping stone in the framework of modern gaming and stands as a satirical analysis of pop culture at the time. After much anticipation and an unexpected delay, Grand Theft Auto V brings us back to the sunny beaches of San Andreas to show us all that has gone wrong in society and everything that has gone right in gaming.

The first major advancement in the series tried and true methodology is the implementation of three playable characters. Franklin, Michael and Trevor come from very different backgrounds and live unique lives, but their thirst for cash and success drive them together.

The story is once again top shelf stuff, filled with intrigue and humor to entertain for days. However, it is a much lighter tale than the revenge filled romp Niko Bellic treated us to. Don’t get me wrong, the amount of violence and deranged criminal activities remains high, but there is a heavy stench of ham and cheese permeating from each character you meet. Perhaps it is the lightheartedness of life in the West Coast, but I was laughing way more often than during my stay in Liberty City. Yet it is this lack of real motive that acts as a flaw for the main characters. None of them have any real reason to be mass murderers other than to build up a healthy bank account. Echoing CJ from San Andreas, our trio comes off as rather unlikable. When looking at a sociopath like Trevor it is understandable, but the more balanced personalities of Michael and Franklin simply paint them as scumbags trying to hurt others for their own fortunes. They are the antiheroes the franchise’s trademark anarchy has always asked for.

Being able to switch between each on a whim is an ambitious gameplay decision, but one that pays off in the end. It manages to make the game even more addictive, for when you are reaching an impasse with one character, a new mission may be waiting for the next. Adding the mechanic into the elaborate heists that mark the game’s set piece moments stands out as an enjoyable and unique experience.

The thirst for money is the driving theme of the game, with each new venture acting as a profit marking opportunity. Buy a property, trade stock, manage a business; thankfully all this helps give each side quest a sense of purpose rarely seen in the previous games. 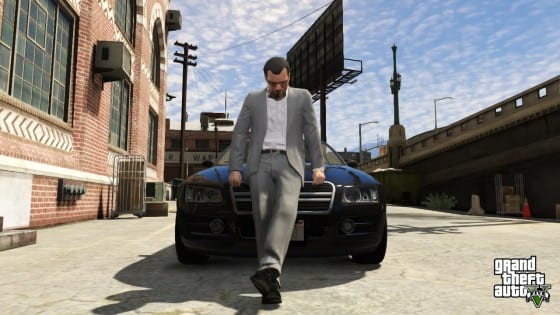 It is with this scope that GTA V carries itself. Beside the sharp script and careful characterization, the protagonists all live their own lives when you are not using them. Loading the game up the next day will feature whoever you played last doing some activity and with new clothes, almost teasing you that the city lives while you sleep. Graphically the engine is being pushed in ways that should not be legal. Once you get used to the jagged lines and pop-in you are treated to an awe-inducing map exempt from loading times and bleeding with detail. Every time you come back into the game you are surprised with another little quip that makes the world just that much more believable.

While other franchises would see turning the realism down as a step back, GTA V’s simplified car physics and over-exaggerated missions bring the series back to a golden age. Mayhem can be escalated to a ridiculous level and the glorious return of jets and armored vehicles is supplemented with submarines, off road races and an arsenal to rival Saints Row. Weapon handling is straight out of Max Payne, making firefights much more intense than we remembered. Rockstar understands why people play Grand Theft Auto and it did not hold back in providing the content.

It can be easy to tear down the praise leveled at this game as a bunch of hype. After all, it can’t be possible that a series receives such a warm embrace every time a new installment drops. Yet, when you break down all the individual parts that make GTA V you see just how much polish has been put into the final product. There are barely any problems with the package and those that are there are entirely forgivable within the scope of the game. The biting satire and ultra-violence that make the franchise relevant are as strong as ever, but will continue to be the greatest deterrents for the critics. Grand Theft Auto V stands as the perfect dovetail for this generation of gaming, encompassing everything we have learned in the past eight years and showing us how much more we can grow.