EA Sports has become a household name with the consistent quality of its FIFA titles. The worldwide brand continues to be the most popular sport video game in the world and with their newest title they say goodbye to the current generation of consoles. Needless to say the improvements from the previous game are noticeable and help make FIFA 14 a better experience.

Published by: EA Sports
Genre: Soccer
Platform:PS3,Xbox 360, PC
What works: Game feels more real without being less fun | Ultimate team will continue to steal your life away|
What doesn’t work: Still has trouble with referees|
[rating: 4.5/5]

The first change many will notice is the revamped menu system. Honestly, I would be pleased if every EA Sports game implemented such sexy freaking menus into their games. Not only do they look more modern than in previous games, they are intuitive. Your home screen will change according to what you have been playing last, making getting to the action a seamless process. It is refreshing to see things are grouped together in a way that makes sense. The fact alone that I am spending an entire paragraph talking about the menus tells you that they are a game changing experience. 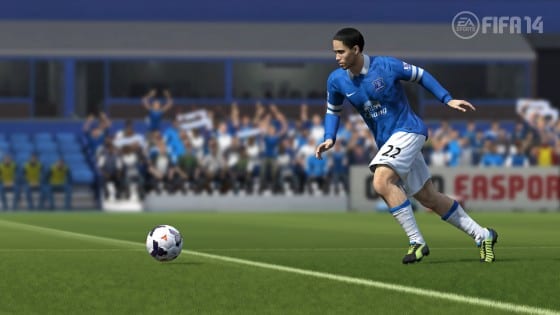 Once you are on the pitch you will immediately notice the new physics. Players move with more realistic momentum, no longer being able to turn on a dime after a full speed run. While it is still a joy to dribble around with stars like Messi and Juan Mata, lesser skilled players will have trouble keeping control at higher paces. A poor cross or mistimed pass will no longer be as forgivable, and a really sharp turn will leave the ball in one place and the player in another. Through the new physics, EA Sports changes the way you play the game. You need to be aware of who is in control of the ball at what time. This gives players who are soccer fanatics a noticeable advantage, yet forces the more casual fan to really get to know the people on the field. 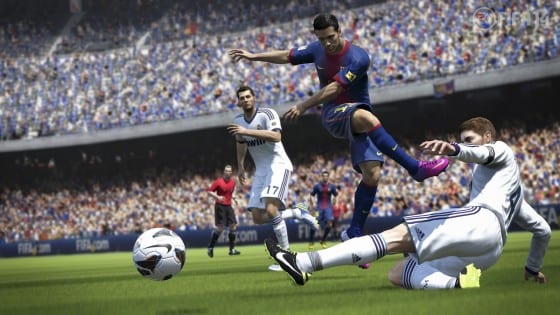 The majority of game modes have been left untouched. Be a player mode still has the annoying flaw of not being able to be subbed into a game and Ultimate Team continues to be more addicting than Nutella. Player cards now can be given different types of chemistry to really build a specialized team for different situations. Manager mode has had the biggest change in the shape of not being able to see player’s stats unless you scout them beforehand. This makes managing the scouts on your budget a much more hands on activity than before.

What really stops FIFA 14 from being the perfect soccer experience are some of the same gripes that have plagued the series for the past couple of years. The offside rule is particularly sensitive this year, with some extremely annoying calls when the player was completely onside. Crossing is still a tad fickle and you will find yourself making stupid passes due to poor stick placement several times. However, teammate AI has been addressed, presenting a more energetic set of players on the field. Strikers will continue running waiting for the cross and poachers will actively seek an interception on the midfield. The same ruling applies to defense, with sweepers actually doing their job and goalies possessing at least half a brain. Overall, you will blame yourself for mistakes more than the computer, which is a big step forward for the series. 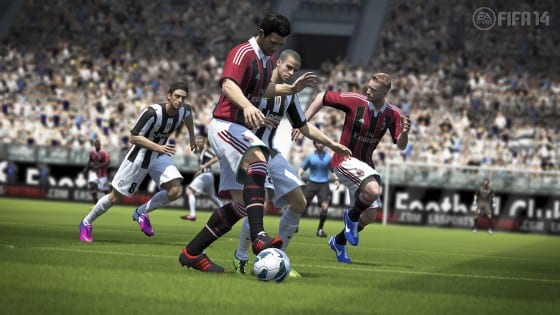 Every iteration has tried to bring FIFA closer to the real thing and 14 is no exception. The revamped physics add a whole new layer to the way you play and the improved player AI will mean score lines will more closely resemble what you see on match day. Despite all of this realism, it is still a ton of fun to play. Many of the same annoyances will continue to vex longtime fans but it didn’t stop us from picking up the game last year. EA Sports likes to dribble the line between hyper-realism and arcade thrills and with FIFA 14 they have played for the perfect balance.  They did not fix what wasn’t broken and the tweaks added to the formula make it a better overall experience. It continues to be, without a doubt, the best soccer game on the market. 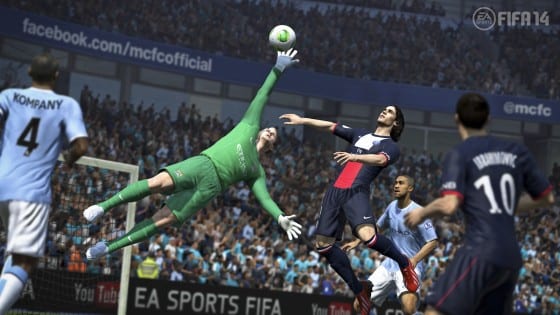 Next Gen Update: I recently got the chance to spend a lot of time with the Playstation 4 version of FIFA 14 and beside the notable graphical upgrade, its clear from the get go that the guts of the game remain the same. The full 1080p resolution does its job in passing the across the room test and a new suite of camera angles help in making the experience much more like a real broadcast. Several of the international superstars have gotten facelifts and the game feels much smoother overall. Is it worth a $400 dollar system? No; the previous generation game is still the best soccer experience you can buy and there is nothing fully rendered blades of grass and jersey physics can do to take away from it. It is unfortunate that FIFA 14 is over shadowed by the stellar offering put in place by NBA 2k14. Yes, they are two different sports, but the folks at Visual Concepts overhauled their already stellar game to make it a truly next gen experience. FIFA 14 looks pretty, but that’s as far as the update goes. Fortunately though, if you are looking for a soccer game on your new shiny system, the only option you have is a  damn good one.