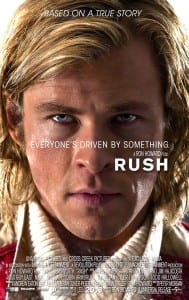 It’s not difficult to explain what “Rush,” the Ron Howard historical film about the contentious rivalry of two Formula One drivers in the 1970s was trying to tell me. It’s a movie about speed, both the mechanical kind and the pure kinetic energy of human beings. It’s about Europe in the 1970s, with the magnificent hats, and color-blocked outfits, and Chris Hemsworth’s tight, tight pants. It’s about two men who thought they were different (but you just know they’re not).

The script, by Peter Morgan, says all of these things, and more, loudly, and without any trace of subtlety, but you can’t help but get wrapped up anyway in “Rush.” The film is a careening history of Formula One racing and the rivalry between the overconfident British playboy James Hunt (Hemsworth) and the serious, statistics-spouting, brooding Niki Lauda (Daniel Bruhl). Their rivalry reached an apex in 1976 when Lauda’s car crashed and erupted into flames at the German Grand Prix at Nürburgring; Lauda suffered severe burns to his face, neck, throat and lungs and nearly died. Yet six weeks later he returned to the track to to attempt to complete the racing season.

Chris Hemsworth might have limited range as an actor, but he’s an intensely physical presence who’s at his best when he’s not saying anything. Peter Morgan’s over-expository dialogue about Hunt’s background and love of hard-living doesn’t hold a candle to the way Hemsworth sits at a pre-race media junket, nervously flicking a lighter over and over again and his body thrumming like a guitar string wound too tight. But Daniel Bruhl, who plays Lauda, has a bit more range. He gives a stunning performance playing a man himself full of braggadocio, but unable to sit easily behind it the way Hunt does. Howard and Morgan pit their rivalry as a nerd vs. jock type of thing that’s incredibly obvious but also really entertaining to watch. Hunt has the natural reflexes of a driver, but Lauda knows how to design the car; Hunt will go for the kill even if it’s a huge risk, while Lauda is constantly reminding the other drivers that every race carries a 20 percent chance of their death; Hunt calls Lauda “ratty” because of his overbite, while Hunt…looks like Chris Hemsworth. And the most damning, while Hunt’s arrogance earns him friends, Lauda’s arrogance alienates them (in other words, they’re both assholes, but Hunt’s the asshole you’d like to get a beer with.)

I wish the dialogue was better- Morgan’s really piling on the ham, with tons of voice-overs, as well as scenes like Hunt telling his ex-wife that she “shouldn’t have gone looking for normalcy” with a Formula One driver, and Lauda telling his wife that if she loves him she won’t say anything about him getting back in the car after his accident. These lines are not just lame- they’re obtrusive. For example, Lauda’s line comes at a truly wrenching scene when his wife catches him trying to squeeze his wrecked, swollen head into his racing helmet. In that moment he looks intensely sad and he looks a little insane- but he also looks heroic. He didn’t need to say a damn thing.

Oddly enough when “Rush” is at its best it seems to be channeling Darren Aaronofsky’s “The Wrestler” and “Black Swan.” As strange as that may seem, all three films are about the human body in extremis, and about a small niche of people who risk destroying themselves in pursuit of a rather vague interpretation of perfection. The racing scenes are best for this. Men love their cars, and Howard clearly loved his; the grand prix scenes are nearly pornographic in their mix of crushing sound and viciously fast visuals. If you’ve never seen Formula One racing you should know the cars are less than half the size of a NASCAR stock car, and while NASCAR has stadium-style courses, F1 appears to simply take a random country road in Europe, put some flags on it, and call it a day. It is a terrifying, thrilling experience to watch these death traps on wheels try to destroy each other. And like the sport itself, Howard includes just enough chaos to make it really interesting.