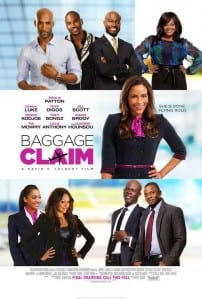 It’s a mark of the sheer irresistibility of Paula Patton’s character that this response did not make me want to throw a bottle at the screen.

Were this Katherine Heigl, or Meg Ryan, or any of the other golden-haired waifs who’ve floated through the rom-com scene since Doris Day set the template, I would have thrown a bottle at the screen (metaphorically, of course, I’m a lady). But I didn’t. Patton didn’t let me.

Partially, this is because Patton is no golden-haired waif. She is what my grandfather would call “substantial”- a tall, large-framed, stunning woman. In a terrific scene, she towers over a diminutive Taye Diggs in her formidable heels. And my, how she runs! There’s a lot of running in this movie (through airports, through restaurants, running in front of taxis, running back to collect things she’s forgotten). Her Montana galumphs through life, powered by optimism and pop songs. She’s clumsy too- the centrifugal force of her whirling limbs can cause a crowd to part like she’s Moses. She is chaos in dorky glasses and she is magnificent.

This movie is so bubbly, so insubstantial, it seems weird to even give you a synopsis, but I will anyway. Montana is trying to find a boyfriend in time for her sister’s wedding. Her friends- the aforementioned requisite slutty friend, and the also requisite sassy gay friend (Adam Brody)- convince her to take another look at her exes to see if any of them have evolved. Coordinating an absurd search party of their airline friends (baggage handlers, TSA agents, gate agents) they manage to put Montana on planes with all of her old flames. My faves are Diggs, who has become a snotty politician in Montana’s absence, and Djimon Hounsou as a hotel magnate (when he arrives at Montana’s house, Brody gets off a great joke about how the Prince of Zamunda is here to see her).

In the realm of casual, screwball comedies, I haven’t seen anything this purely entertaining in a while. Rom-coms of late tend to get maudlin three-quarters of the way through (“Something Borrowed”), sport a huge celebrity cast, all of whom are phoning it in (“Valentine’s Day”), or become the domain of men in raunchy Judd Apatow comedies (everything else). The fact that this novel little throwback primarily stars men and women of color should not be ignored either. We might have a black President, but the Hollywood glass ceiling for people of color has not completely shattered. How else do you explain the delightful Paula Patton, who should be the next Meg Ryan, but instead is primarily known for her marriage to Robin Thicke? Here’s hoping this dopey little flick can put a few more cracks in it.