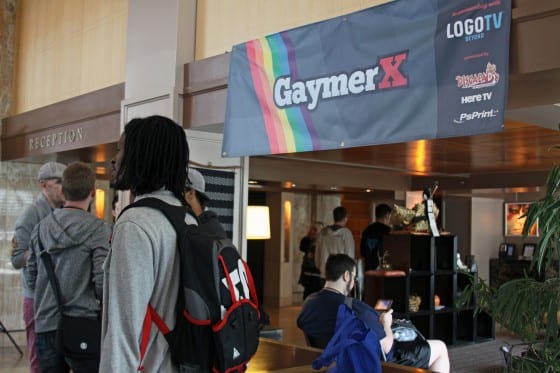 It’s now been over two years since my last foray into gaming journalism and I didn’t know if I would ever start again. I had lost the spark, and I realized I enjoy writing more when I feel compelled to. Halfway through GaymerX, the first gaming and tech convention to focus on the LGBT community, I started to feel that spark again. By the end of the weekend when I found out that the larger gaming media chose not to cover or publicize the convention much, I felt compelled to add my voice to the conversation and not let the opportunity, to tell not just my story but this community’s as well, go by.

Last August, GaymerX (originally called GaymerCon) hit Kickstarter, blogs, and social media with a cause and a dream to create a safe place where LGBT gamers and geeks – and their allies – could come together and create a solid community base. The $25,000 goal took less than a week to reach and the month-long fundraising drive ended its run with 1,531 passionate backers and $91,388 raised.

As a gaymer myself, I was initially very interested in the project but also had my own reservations about going or if this convention was even necessary. I brought it up to a friend and she replied instantly that I would be crazy not to go because this convention was made for me. She was right. I myself did not know many other gaymers or even that there were pre-existing communities, and gaming has been a part of my life since I can remember. I even spent my short-lived gaming journalism career writing primarily from my perspective as a gay gamer along with an ongoing column about how it affected my dating life. So right then and there, I added my name and money to the cause.

A year later, GaymerX began earlier this month on August 3-4 in San Francisco, CA. I flew back home to my beloved Bay Area feeling both excited and a little anxious about going alone. I didn’t know what to expect or how I would feel but I decided to go in with an open and clear mind.

What I loved most about this convention was that there was an overwhelming sense of positivity among the attendees. People were quick to start conversation with strangers and everyone was very easy to talk to. There was no judgment, just a lot of people having fun. And although the crowd was very diverse, the attendees were mostly male but that could stem more from a hardcore gaming and geek audience being skewed male to begin with.

Tying in with the Logo TV partnership, convention hosts included PandoraBoxx and Akashia, former contestants from RuPaul’s Drag Race, and although their comedic and lively presences were welcome, I couldn’t help but feel that their gaming experiences may have been less than they advertised.

The convention itself was smaller than I expected as I have mostly been exposed to larger anime, comic, and gaming conventions. Located primarily in the Hotel Kabuki in Japantown, GaymerX had three panel rooms, a few game rooms, an artist alley, and a very small vendors area. When I go to conventions, I usually don’t visit many panels, instead spending more time navigating the various areas, being a healthy consumer, and socializing. But given the smaller scale, I felt I fully explored the convention in a few hours and there was only so much time I could spend in the game room playing Smash Brothers or watching people play Dance Central.

I found myself fatigued wanting to sit and rest, and that’s when I ended up in a long line for a panel that happened to be Meet BioWare! I knew of BioWare’s reputation as having LGBT storylines and options in their games but I sadly have yet to play any of them. My only exposure thus far had been from watching some youtube videos of tasteful sex scenes and genuinely touching storylines. Knowing this, I decided to stay in line and sit in on the panel.

I didn’t know it then but this would be the moment that made me understand why this convention is necessary. Dragon Age Lead Writer David Gaider (openly gay) and BioWare Community Manager Jessica Merizan (married but self-described as not entirely on that side of the spectrum) spoke so eloquently about the importance of the gaymer community in this industry. Gaider brought up that many introverted and closeted gay people growing up may look to video games as an outlet, that the gaming community is something they seek out so as to be understood, so this convention would help a lot of people. Throughout this, I could hear a congregation of “mmhmm”s and “yup”s all around me agreeing. I said it too in my head. I was that kid. All of us in that room have been that kid at one point in our lives and maybe to some extent still are.

In Merizan’s realm, she talked about the homophobic comments she sees on twitter and in forums, describing them as “absolute vitriol,” and how she really wants to put an end to bigotry wherever she can. She said it with such vigor and genuine compassion that I was almost brought to tears. Merizan is an amazing ally to this community and it really reinforced the idea that it is so important to do whatever we can in each of our own spheres to end any type of injustice that we see or hear. 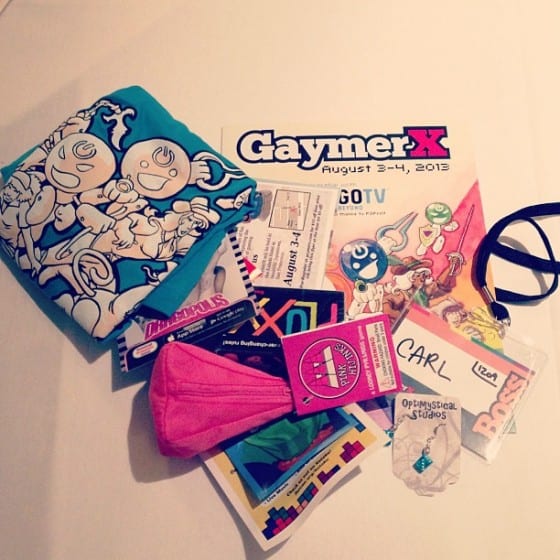 Some of Carl’s swag from the show. notice he’s a boss.

Over the weekend, I’ve seen an amazing receptive nature to diversity and acceptance within this community. It was brought up in the panel that we should get rid of the assumption of a straight white male – character or audience – when it comes to game development. The decision for being able to romance any character was BioWare’s way of telling this part of their audience that they are just as important as everyone else. Gaider also brought up that he was asked by a player to add an option to turn off all gay content in the game because he didn’t want to see any of it. His response was that a person shouldn’t be able to turn off gay characters and themes just because he or she feels it’s distasteful, and that’s not how it works in real life anyway.

At a preview pilot screening for a comedic 30 Rock-esque web series aptly titled Gaymers, I couldn’t help but notice that the cast was predominantly white. I wasn’t the only one as someone brought it up before I had the chance but the creators and actors had anticipated that critique and said in this case, it was a matter of a tight timeline and choosing the best actors from their first audition. Actor Luke Taylor assuaged any doubts I had by stressing that they didn’t want to throw out terms like “diversity” or “representing an entire community as a whole” without truly doing it themselves to battle the systemic racism prevalent in the entertainment industry.

In the Gaming Journalism and LGBT: Past, Present, Future panel, I heard more reasons from the panel why GaymerX was necessary, battling the main argument that this convention is self-segregating. One panelist proposed that the gaymer community sees this as a need to have a safe space in a predominantly straight male community (homophobic Xbox Live rants come to mind). Afterwards, he brought up a good point that nobody questions other niche conventions. Another panelist said that GaymerX is also an important forum to tell game developers that gay characters are underrepresented since there are few gaming icons that we can relate to.

Another important reason is because there is a need to change the language and LGBT perception within the industry. An indie developer visiting the convention brought up that he created a gay game (that I believe to have been Luke Miller and his My Ex-Boyfriend The Space Tyrant) that was covered in the press as an “oddity.” The insensitivity in the language shows that we still need to open up a dialogue and change the perception that the overall gaming community – or society in general – has.

As the convention was nearing its end, I found myself smiling. I was happy I was able to attend and experience such a positive environment with an ever expanding community. My experience this weekend was one of pride. I am proud to have helped fund not just a convention or a community but what I truly believe will be a movement to change this industry for the better.