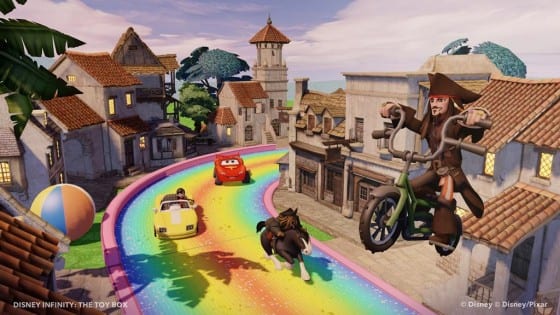 Let’s just get this out of the way; your kids are going to want Disney Infinity. They’re going to want all of the figures and all of their variants. They’re going to ask you for all of the power discs, which are packaged randomly. They’re going to want the case that holds the figures – the whole shebang, and it’s going to cost you…a lot. Want to know a secret though? Through all of the merchandising and pandering – Disney Infinity is worth it – more or less. It may have its fair share of sloppy design and gameplay ideas, but there’s something refreshing and fun about picking up Sully from Monsters Inc and watching him come to life on screen and then going into the Toy Box Mode and being as creative as possible. With its imagination and ambition, Disney Infinity represents the best of the company, but with it’s excessive pricing and structure that literally requires you to keep buying, it also represents its worst.

Anyone who’s played or is even seen the Skylanders games will find much of Disney Infinity’s core ideas familiar. The game comes with a peripheral that plugs into the front of your console and allows you to place little plastic figures on to it and with a it of pixie dust – the character comes to life almost instantly.  The starter pack comes with three of these figures to try out, Mr. Incredible from the Incredibles, Captain Jack Sparrow from the Pirates of the Caribbean franchise and Sully from Monsters Inc – but if you think that’s enough, you’re missing the point entirely.

To put it bluntly, Disney Infinity is dangerous, especially for Disney buffs like myself, collectors and of course, parents. Whereas Skylanders is just creating a stable of their own characters, Disney has almost a century of characters, props and intellectual properties to dig from.  The initial wave isn’t that impressive, with a lot of more recent Pixar movies represented but there’s already a planned wave 2 and a separate Toy Story line that’s coming next month. The figures themselves are cool and have a surprising weight to them, and I may or may not have a few extras sitting around just as display pieces.  The figures are just the beginning though, as a series of Power Discs are also available for $4.99 a pack that either give the player extra abilities or give them extra items to collect. Here’s the kicker, these power discs are sold as random blind buys, so you may end up with a bunch of the same thing in an effort to look for that one piece you’re searching for. And don’t worry, there are reminders throughout the entire game as to what you don’t have.

Gameplay wise, Disney Infinity is broken down into two major parts – the adventure playsets and the toybox mode. The playsets are what you’d expect from a licensed game like this, simple fetch quests set in the world of the figure you’re using (in this mode characters from different franchises can’t interact with each other). The missions may be simple, but they’re still a lot of fun to play through, especially standouts like the naval battles in Pirates of the Caribbean and the action heavy Incredibles stages. In a slightly tricky but no less than genius way, you can’t finish a world until you finish it with all of the available characters from that world – so until you buy all of the figures.

The Toybox mode is where the game really starts to come into its own. Here all of your characters, all of your collected items, everything you’ve unlocked (or bought) can be combined into your own adventures or stories. Want to have Johnny Depp’s Jack Sparrow meet Johnny Depp’s Tonto? Go for it. A race between Mickey’s town car and Lighting McQueen? You got it. It’s a lot fun to watch someone experiment with the creation suite of Toybox mode as they unlock new things and start to grasp the concepts of just what they can do. For a game aimed mostly at kids, the toybox mode and its tools are actually pretty impressive.

Presentation wise, Disney Infinity is a mixed bag. The entire world is based on toys and everything feels and looks the part and while it works for the non-human characters, some of the humans look awfully strange and rushed. A lot of the original voice actors have returned (even bigger names like Jason lee as Syndrome from the Incredibles) and the replacement actors they’ve used for the others are pretty impressive themselves. A lot of the game feels rushed in fact, as there are some peculiar design ideas here. Want to leave a level and go back to the hub-world? Prepare for an awkward, almost frozen screen for almost half a minute as the game loads.

Through all of the money grabs and attempts to empty your wallet, Disney Infinity works not necessarily for what it is today but what it could be a six months from now, one year from now. The game is quick to remind you of what’s coming down the pipeline with appearances by characters that aren’t available yet, and let’s not forget about the properties that Disney owns like Marvel, Star Wars and The Muppets that are sure to make appearances as movies and TV shows get closer to release. If it were a regular movie tie-in game, Disney Infinity would be a sloppy forgettable mess, but there’s something about the figures that makes Disney Infinity feel so fresh and new (even though it’s just Skylanders with mouse ears). It’s a game that features Disney’s best and sadly it’s money hungry worst.

This review is based on a PS3 starter set provided by the publisher. We played through the playsets and dabbled in the toybox mode. We also bought more figures than we care to disclose. Weep for our bank accounts.