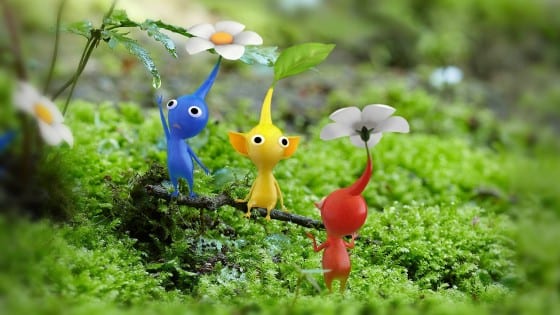 When you really boil it down, Nintendo’s success can be attributed to its ability to turn the mundane into the fantastic. A short Italian plumber, a small boy from a village, all made to be more than they were. The Pikmin franchise is perhaps the best example of this; the majority of the gameplay takes place in a garden and you’ll take on enemies like bugs and crabs. In typical Nintendo fashion though you’ll have a blast doing it, even if you’re not quite sure why — Pikmin 3 won’t save the Wii U, but it will make you rediscover that giant white paper weight on your entertainment center.

Alph, Brittany and Charlie, the crew and main characters of Pikmin 3 are on a  search for food for the home planet and just when all hope seems lost, they see planet PNF-404, a water based world that’s full of fruit and looks and awful lot like Earth. Upon descent, the ship crash lands and the crew is separated and your task becomes to reunite the crew with the help of your new found friends, The Pikmin. It’s a familiar task and setup for those who have played the previous games, but the art and direction of legendary creator Shigeru Miyamoto is charming enough to forget all that.

The majority of the first portion of the game is spent learning how to navigate the world and more importantly, how to use your Pikmin.  Again, not much has changed from previous games and the main learning curve is understanding how to control the experience using the Wii U gamepad. The LCD screen acts mostly as a map that works remarkably well when you’re trying to explore a new area, and can also be used to play the entire game on. The main problem with using the gamepad is how the player control is mapped.

Your player’s movement and throwing access are both mapped to the left thumbstick, while camera movement is mapped to the right.  Sounds simple enough right? There are a majority of sections where you’ll have to throw some of your devoted followers at or into objects, but you’ll have to literally stop everything you’re doing in order to get a precise shot.  There are two other control schemes available, using the pro controller or the Wii-Mote and nunchuck combination, but even though the wii-mote offers the best option, neither feels incredibly comfortable.

As a whole, the Pikmin 3 experience is a solid one. It’s easy to grasp but tough to master and you’re sure to want to go back and try other sections again, especially when you get to the point where you’re tasked with controlling all three crew members at the same time.  What’s interesting is that the game handles death and some pretty dark topics pretty head on for this light-hearted of a game, like when one of your Pikmin dies, they whimper and their soul floats helplessly up to heaven.

That’s actually one of Pikim’s greatest assets, it’s score and visuals are remarkably good for a number of different moods and it’s even a bit alarming when it suddenly turns dark. Visually, the game doe s a great job in making even the smallest and most mundane objects look huge and important.

Wii U owners have been looking for a game to validate their purchase but sadly, Pikmin 3 is not it. It is however a remarkably fun and addicting puzzler game that is more than worth the price of admission. Though there’s not much new here for those who have played previous games, the charm, wonder and fun of the Pikmin is undeniably fresh and worth a look.