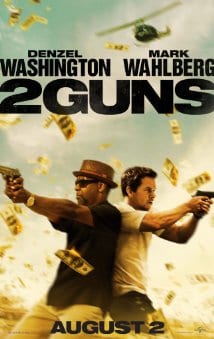 People, August is here. Vacations are ending, kids are getting ready for school, and the blockbuster season is over. The month is kicking off with 2 Guns; A.K.A: Training Day 2, A.K.A: Safe House 2 A.K.A: Inside Man 2.  People love Denzel Washington and they love him even more when paired up with whichever white actor is making money these days, and this time, it’s Mark Wahlberg, our boy from Boston. Wahlberg may be getting pushed out of his “It Guy” status by Channing Tatum (who will probably be Denzel’s partner in his next action movie), but he still makes great money, and Denzel is coming off an Oscar-nominated movie, “Flight.” So how does this fare? Well, let’s just say it’s a typical August movie: briefly enjoyable while you’re there, but blink and you’ll completely forget walking in the theater.

The premise is that Bobby (Washington) and Marcus (Wahlberg) are cops working together to sell passports for drugs and cash, but both are undercover agents looking to bust the buyers. Bobby works for the DEA and Marcus for the Navy, but the problem is neither one knows the other’s undercover as well and thinks the other is a dirty cop. They decide to rob the drug lord’s bank in a very well done scene to speed up the ops but find way more money than they expected. This gets the people who own the bank and and the people Bobby and Marcus work for involved, and starts a huge domino effect that pulls double cross after double cross throughout the two- hour movie.

The plot doesn’t really matter; what matters are the characters. Wahlberg and Washington work well together, there’s some good stuff written there for them,and the opening scene with them is really great. But the problem is Washington was definitely given the short end of the stick when it comes to his character. Washington is a great actor and it shows, but there is almost nothing written there for him and you can see him struggling to make something of this character. Whats odd is that that’s not the case for Wahlberg; his character has a real motivation, a sense of experience and ultimately outshines Washington. Not through anything Washington did or didn’t do, but because Wahlberg started with a much better hand, so to speak.

The plot begins gets muddled around the 45-minute mark and only seems to get worse. They jump around across the Mexican border like crazy; you never can tell where exactly everyone is. Bad guys show up without explanation as to how they knew where to find them. I can’t even count the number of times one of the leads has a gun to his head and they manage to either escape or are let go. There’s lots of little stuff that individually you can forgive, but it just keeps building and soon you have a stack of plot holes to go through, many of them at the end. I can’t go into the ending but it is completely ludicrous and is a total letdown down for an action movie climax. As I mentioned before, a good bit of the plot is seeing who the two leads work for is clean and who isn’t and I’m not giving any spoilers by say most of them are not working with good intentions at heart. The movie works its way up the ladder so high that the American in me was a little insulted because the villains were almost all wearing uniforms and it never seems to end.

The action is fair, the bank-robbery scene in the beginning is short, sweet and believable only because it’s done so quickly and in a small town. There are lots of gunfight skirmishes too but they almost all feel fake due to the military involvement with them. There’s not much hand-to-hand combat to speak of, which is a shame because what little is there was shot well enough and it would have broken up the cycle of gunfight after gunfight. Any action sequence involving cars is terrible, police are never called, and they never show up when something is happening in a public place. The climax could have been exciting but is shot dead in the head by bad filming. I won’t say what happens but it makes the climax of Kevin Smith’s “Red State” look the the ending of “‘The Dark Knight Rises.”

While this isn’t a disaster like a few other recent movies and it isn’t completely dull, there’s nothing new or exciting here to really recommend it. It has some really good moments early on but most of the minor characters are throwaways; the leading actress (Paula Patton) only has presence when her shirt’s off, and there’s an awkward message about immigration that pops up for about five minutes and then vanishes and feels completely crowbarred in.  It isn’t totally incompetent as it earns a few badges along the way, and God bless Denzel Washington for trying to make a something out of this empty character. An actor with an ounce less integrity than Mr. Washington would have completely given up, but he helps elevate this to a square “2 Stars.” If your tied down and forced to watch this, it’s better than a root canal, but considering “The Wolverine” is playing next door, there’s no reason to go.

Here’s a question: Channing Tatum seems to already have replaced Mark Wahlberg, so why didn’t they cast  him in this? Did Channing Tatum really love “Django Unchained” so much that when given the choice between Denzel Washington and Jamie Foxx he went with Foxx? I’ll tell you this: Considering how poorly “White House Down” did at the box office, if this movie makes money, Channing Tatum will be outside Denzel Washington’s house at 2 a.m. throwing pebbles at his window. “Pssss, Denzel? Are you awake? Wanna make a movie?”