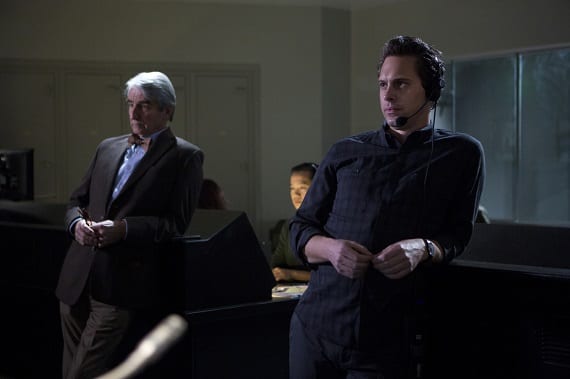 There is something so infuriating about the way The Newsroom often chooses to tell (preach) their stories that it can manage to put me on edge. The sanctimonious tone in which it tries to tell us how smart and good-hearted and damaged their characters are is almost more tiresome than the actual content-which this week included Troy Davis, the 9/11 memorial and the beginning surge of the Occupy movement. Again it’s Aaron Sorkin believing that his viewers are too inept to have opened a newspaper, clicked an NPR link or watched even The Daily Show in the last two years so not only is he trying to deliver entertainment but he’s also trying to educate us, which is enraging.

The whiplash this show gives me from loving it to hating it is absurd.

The characters are all over the place this week; Jim is on the road, Neal on the streets of New York and Maggie is heading to Africa or what I’d like to label “the storyline most likely to turn out terribly.” There’s a lot going on, a lot of forward motion as the one hour takes us from August 2011 through September. Jim is now being let on the bus, Sloan and Elliot have hosted the 9/11 memorial and Neal has seen firsthand how the Occupy movement turned from peaceful to a misconstrued riot in mere minutes.

Crazy amounts of stuff can happen when the showrunners have no clear purpose.

There’s obviously one continuous plot happening which is the Genoa storyline that breaks more headway this week as Jerry Not Jim tells Mackenzie that Genoa was an operation where U.S soldiers used sarin gas (nerve gas which has been labeled as a weapon of mass destruction) on around fifty civilians. Mac understandably doubts it but Jerry Not Jim convinces her to let him pursue it for a while longer and what he finds makes it impossible for Mac to ignore. Jerry Not Jim makes contact with a man who claims he was there when the attack was made—making Genoa a war crime of massive proportions. It’s a very interesting topic due to it being an original idea and the heinous actions it’s presenting but it’s also being rushed so we’ll have to see what the next week will bring.

Neal’s subplot is also, sadly, being rushed  because why give Dev Patel the meat of the story when you can just use his storyline as a catalyst for Will’s issues.

Oh, because that what every character is ever.

There is such potential for this storyline! Neal is the one who desperately still wants (and needs) to break into the investigative journalism field. He’s one of the youngest—a target Occupy audience—and one who’s greatly connected to the media world. It would make sense to put him on this storyline and let him run with it but instead his time is cut short so that Will can yell at someone again.

The storyline that is taking up too much time and space as always is the whole shenanigans with Jim and Maggie that literally nobody has or ever will care about. Might I remind people how talented Alison Pill and the Tony Award-winning John Gallagher Jr. are? Because with the material they’re being handed you’d never guess it.

One of the most uncomfortable portions of the show was the scene between Maggie and Lisa. I’d spent most of the hour thrilled that we were being given some friendship moments between Sloan and Maggie rather than tension because of the whole Don fiasco. So to be ambushed with a fight between a pair of friends was saddening especially considering everything that Lisa said was entirely true. Maggie had spent the last year living in a world where her problems were her own and nobody else’s; what she did had no effect on Don, on Lisa, even Jim because like all of us humans when we’re caught in some emotional duress we do think of ourselves and how we’re feeling. So Maggie gets a tongue lashing from Lisa not because she’s in love with Jim but because she lied about it, used Lisa as someone who could safely date Jim without the latter falling in love with her. Lisa was a precaution so that some other girl wouldn’t come and swoop him away. It was selfish and it was hurtful but this is the first time we’ve been told by the show to feel so—up until this point we too (whether we enjoyed the triangle or not) were invested in Maggie’s point of view and her happiness and Lisa was simply a casualty of it all.

And therein rests my problem with the show as a whole that goes above and beyond it’s air of superiority or the fact that it has the basic make-up to be a top notch show but so often grievously missteps. It’s the fact that a show with such a talented cast and such a gifted writer makes the mistake of telling its audience what to feel and what our characters feel rather than showing us. It’s a rookie mistake that such veterans of the field shouldn’t be making.

The clear cut misfire of the episode is the Inception-styled, vomit inducing moment where some lowly camera crew while piecing together packages for the 9/11 memorial take a trip down Will’s memory lane not for their sakes, not for Will’s sake, but so that the viewer can see just how awesome Will is again. We don’t just need to hear it from Mac’s mouth or Charlie’s or Maggie’s or even Leona’s, we also need certifiable proof that this is a character who belongs with the greats. Well…I am thoroughly unconvinced. We watch awkwardly along with the two camera crew invading Will’s personal history as we learn that the first time he ever sat in the anchor’s chair was during 9/11 itself.

If a show is good—if the writing is good, if the acting is good—I do not need to see a human tragedy used as a means to create false character growth. I do not to be told via the vortex into the past that Will’s father was an abusive alcoholic and that the need for love and the need to protect transferred from that onto his onscreen persona. I’ve seen enough of the character and the bits that make him who he is that using such a cheap and manipulative narrative is just ridiculous.

Which leads into the next point of interest: the Troy Davis subplot. Listen, I LOVED that it was addressed in storyline, that it was happening on a hugely watched television show and that it was led by one of the my favorite characters (Don). However, just like last year with Lisa knowing Casey Anthony or Jim having a sister/cousin/deceased relative who knew of any or all crises, just because you make it so the character has an emotional tie to spectated news event doesn’t make it more or less compelling.

When the Troy Davis case was going on in real time I wrote a piece about it for a college newspaper. It wasn’t anything remotely stellar, there were notable spelling and grammar errors and it was a lot of words without a whole lot of depth but it was passionate. Why? Because the case was enraging and it proposed a passionate response from activists and people all over the world. We didn’t need to know that Don had written the guy, that he’d followed the case for ten years or that he was some sort of expert just so we could see him and Jeff Daniels practice monologues in Sorkin vernacular.

It told us that Don was smart, that he cared, that Will was at a crossroads of conflicting emotions and ideals, and that once again Sorkin is trying to prove that he is the smartest person in the room.

It’s just cruel how I can find myself so totally immersed in this show one second and then outraged with it the next. There is no middle ground. I love it because it is sweetly sentimental at moments and has phenomenal acting. I hate it because it patronizes me while being periodically idiotic. I don’t want to “hate watch” this show I want to enjoy this show and all of the momentous potential that is has. But if I have to keep enduring scenes where deeply traumatic moments are used for “entertainment gain” or for character moments I’m going to have difficulties and from what I’ve heard that idea may be rearing its ugly head sooner than later this season.

The episode wasn’t the worst I’ve seen but it was hugely problematic in ways that would be better to address sooner than later if Sorkin wishes to have not only a popular show, but a critically acclaimed and inoffensive one.