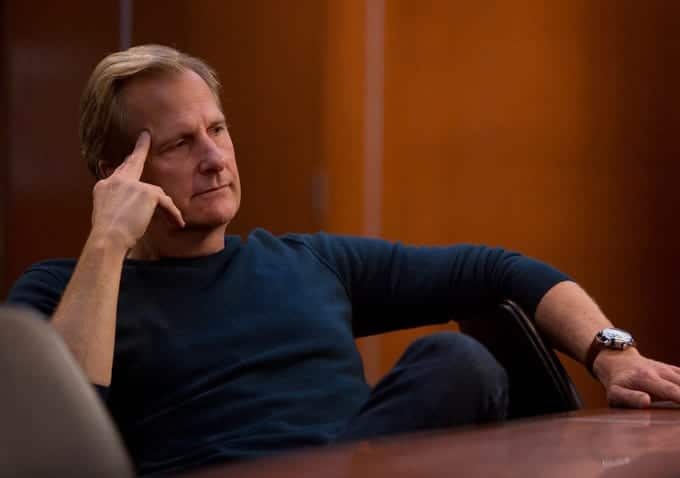 Will (Jeff Daniels) gets advice from his lawyer (Marica Gay Harden).

2. I wanted the show-Aaron Sorkin especially-to hone the ability to not patronize or browbeat its audience. While his make believe viewers are dolts who couldn’t tell the difference between Bill O’Reilly and Steven Colbert, us real life viewers are in fact, capable beings who aren’t watching a show just to be lectured.

3. I wanted it to feel like the show recognized the immense talent it had on it’s hands. From Jane Fonda and Jeff Daniels to John Gallagher Jr. and Olivia Munn, this cast is stellar and to not show it off and it not give them credible material is criminal. It’s an ensemble show so prove it.

I was ready to love hate the episode.

I was ready to climb the ever shrinking step onto my high horse and complain about the women and the ego and so forth and so forth.

I was ready to foam at the mouth at that title they found for the first episode that was supposed to prove that Sorkin had managed to dig his head out of his ass.

Instead I really, genuinely enjoyed it.

1. The introduction of Marcia Gay Harden as the $1500 an hour lawyer Rebecca Halliday who’s been recruited to help represent the team after a disastrous report on a supposed war crime called “Operation Genoa”. This is good for a number reasons. One being that Harden simply brings a wonderful presence to the table but also that it finally breaks the constraints of the first season. It was easy for Sorkin to sit back and reflect on the past year or two and point out everything done wrong. However, creating a storyline that is completely original allows for a greater chance of creativity as well as a season long narrative that will continue to compel viewers to watch. All we know is that our team is in trouble and new guy Jerry not Jim seems to be behind it.

2. It puts our reporters out on the street…you know…so they can report. What I loved the most about the first season was it’s moments of team coherence. The moments when we were convinced that this was a crew of talented news reporters who when down to the crunch could get things done because ultimately they were good at their job. Sadly, we didn’t get much of that instead being delivered nauseating love triangles and preaching.

Now in the first episode back we have Jim hitting the road to New Hampshire and Neal out on the streets of New York trying to really understand the Occupy movement. Jim’s is an excuse to get away from the Maggie and Don drama (and props to Gallagher for acting the hell out of that scene) which trivializes the storyline but still promises a better take on the character. Remember, Jim isn’t just supposed to be self-righteous but also one of the brightest and most ambitious in his field.

The day I went to Boston’s version of the Occupy Movement (a little more cluttered, crowded and wet than New York’s) is vivid and cohesively stuck in my mind. Maybe because it was a new experience, maybe it’s because I had a great friend by my side for a day in the city that I loved, or maybe it was because of the line of thought it provoked and the people that I saw.

We saw the boy dressed in stereotypical anarchistic garb tapping on his drums, we saw the signs littered with what they wanted Occupy to accomplish but never seemingly managing to find a cohesive idea, and despite the rain and the mess and the crowds we even saw Noam Chomsky speak to a bunch of riled up wannabe revolutionists.

It was a mosaic of people and places and ideas and it was interesting. But throughout the duration of its run I never quite understood the why’s and what’s and the how’s. That being said I am immensely fascinated in how The Newsroom and Aaron Sorkin are going to tackle the subject. Did he approve? Will they show it as a legitimate movement or as a hassle by the silly youngsters who don’t understand real life problems?

That aside I am pleased that it gives the wonderful Dev Patel more to do that isn’t asinine plot fodder about big foot or reacting to Maggie and Jims lovers quarrels. Neal was the most undervalued participant of the first season and I’m hopeful that him (along with Sloan and Don my other two favorites) will be serviced with better material.

Which leads me to…

3. Better usage of my favorite characters.

If you had told me before the premiere of the series that Olivia Munn’s character would turn into my uncontended favorite I would have rolled my eyes and gone on my way. But boy am I glad she surprised me turning in one of the quickest and best contained performances on the show as the best character as well. I expect Sam Watterson and Jeff Daniels to master Sorkin dialogue-which makes Munn doing it even better such a pleasant surprise.

If you’d told me after the first episode that by episode five Don played by the fantastic Thomas Sadoski would be my second favorite I would have ignored your opinion all together. Again, I’m glad I was proven wrong considering Don is one of the most interestingly layered characters on show.

Hence why I loved the focus the two of them got. Don broke it off with Maggie allowing us more layers and Sloan was generally a bad ass.

4. It entertained me. It shouldn’t be such a large feat for a show to do so but with The Newsroom the viewer is often caught in between frustration and genuine enjoyment so when the show manages to do the later without the former is a relief and it also showed the new direction Sorkin plans to go in. Sure, we still have moments of self-importance but we also have Will’s character singing Rebecca Black’s “Friday” while on standby and Sloan using a blank piece of paper as a prop. Here is a potential version of the show that seems actually willing to have fun with their characters rather than having to tell us the characters are having fun.

5. Mackenzie didn’t suck! Emily Mortimer has always been lovely and such a trooper with the asinine material she’s been given so to see her character get to succeed even for a moment is exciting. And she did just that at the beginning of the episode in the producer’s room showing, rather than telling us viewers why she’s known to be one of the best producers in the business. I can settle with her using a night light because hey, Will needed music as a sleep aid as well-we all have quirks like that. While I’m not naïve enough to believe that she’ll become her own strong, independent woman who doesn’t grovel to Will at some point this season I’m still excited that this episode allowed some growth that all of season one denied us.

Look, I’m still catching myself rolling my eyes-there is still the destruction of Maggie’s character with her Youtube video issue and her hair cut-yeah that’s actually a plot point. There’s still Mackenzie’s dependence on Will being played for jokes when she’s getting money from Will for a cab home. There’s the potential for Neal’s storyline to turn preachy, for Don’s turn from “bad guy” to “good guy” to ring false despite the wonderful levels of depth Sadoski has given him. Chris Mesina (who might I add is such perfect asset to the show) as Reese and Jane Fonda as Leona could easily be seen as the two talking head villains but would be much better used as actual characters with legitimate concerns-shades of grey are essential in good television and good storytelling in general.

For now though I’ll be excited. From the new opening (a little bouncier, a little less pretentious) it was obvious that while the show hasn’t off the bad fixed all of its problems they’ve at least made an effort to.

So what’s going to happen this season? Are Mackenzie and Will going to get together? Do we care? Will Neal find himself too deep in the Occupy business? Will Jerry not Jim get everyone so in trouble with this Genoa business that there will actually be consequences that effect the show and the people involved? Will Jim’s on the road story be strictly business or addled by more unnecessary love stories? Most importantly will we continue to see our characters mastering the jobs they do? Because that for me is what makes The Newsroom good and is what made me stick by it.

Who knows, we’ll see, but at the very least it should provide something to talk about.